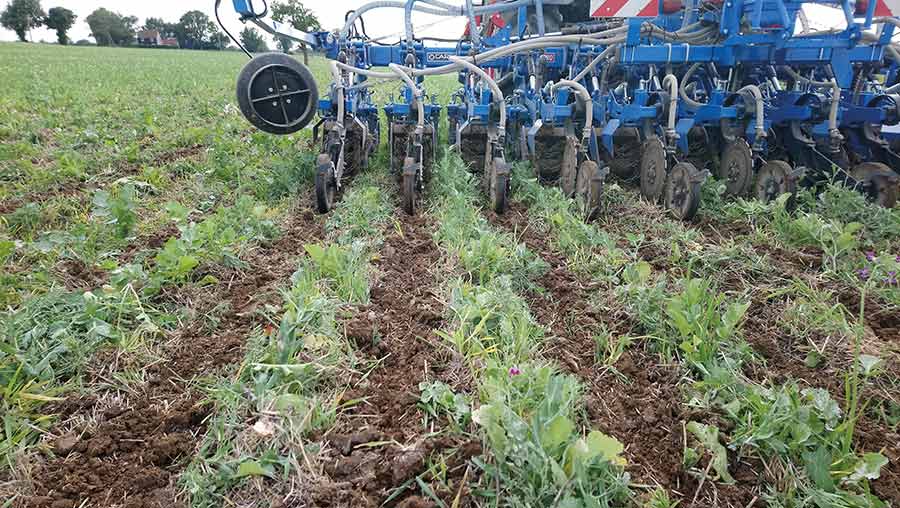 The system produces a narrow, residue-free cultivated zone suitable for drilling the beet crop into, while leaving a significant area uncultivated.

But get it wrong and it risks poorer establishment and lower yields.

The business has experimented with strip-till beet since 2017 with varying degrees of success, following a move to a much-reduced tillage system.

Initial successful trials with strip-till encouraged the farm to establish all 240ha of its beet using strip-till in 2018 and 2019.

However, poor emergence in a dry spring resulting in low plant populations and yield made Mr Hogsbjerg realise that more testing was required.

“The soil conditions are completely different in a strip-till system than a traditional cultivation system,” he says.

After drilling a cover crop of vetch, phacelia, buckwheat and linseed with a Horsch tine drill after harvest, he strip-tilled the beet rows with a 12-row Carre Inro once the cover had emerged in early autumn.

The remaining cover was sprayed off with glyphosate in December before the beet was drilled using a Monosem NG Plus 4 drill in March. 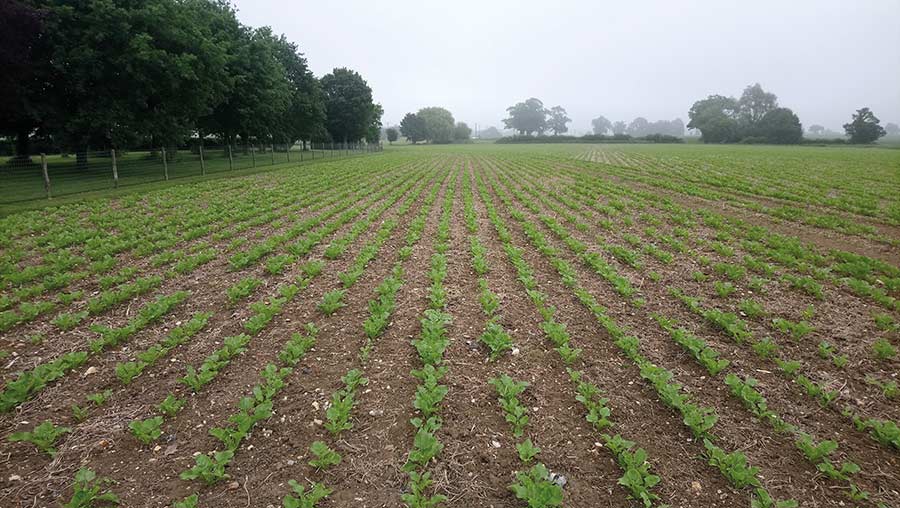 But if there’s any moisture in that tilth it goes down like a road, and then the beet doesn’t come through after germinating.

They can’t physically push themselves through, and that was his biggest problem with emergence.

“It was depressing to watch, as you’ve created what you think our perfect conditions and then you watched them die before they come out of the ground.”

After two seasons of poor emergence, Mr Hogsbjerg reined back on strip-till, setting up a 2.5ha trial in a small field to test a new method.

As well as the cover crop, winter beans were planted in the row when he went through with the strip-till.

“By planting something in the row, it stops the soil destabilising and capping, and you also get a bit of nitrogen, which we don’t have a lot of excess of in our tight rotation with malting barley.”

But the main adjustment was to the drill, with the packer wheels moved apart, to throw soil over the sugar beet seed drilled at a depth of only 0.5cm, without packing it down, he explains.

“Last season they all came out of the ground – perfect.”

The field was lifted in February with adjusted yields of around 81t/ha, which compares well with his earlier-lifted non-ploughed, but more traditional cultivation system beet.

The result has encouraged the business to expand the trials to around 10ha in total in the coming season, including a strip with clover added to the beans in the row.

“It’s all part of our plan to reduce synthetic nitrogen – but we don’t know if it will work.”

Establishment costs are similar in his two systems, he says, but the strip-till system requires one less herbicide spray, saving around £50-60/ha, and he finds the soil much easier to work after harvest. 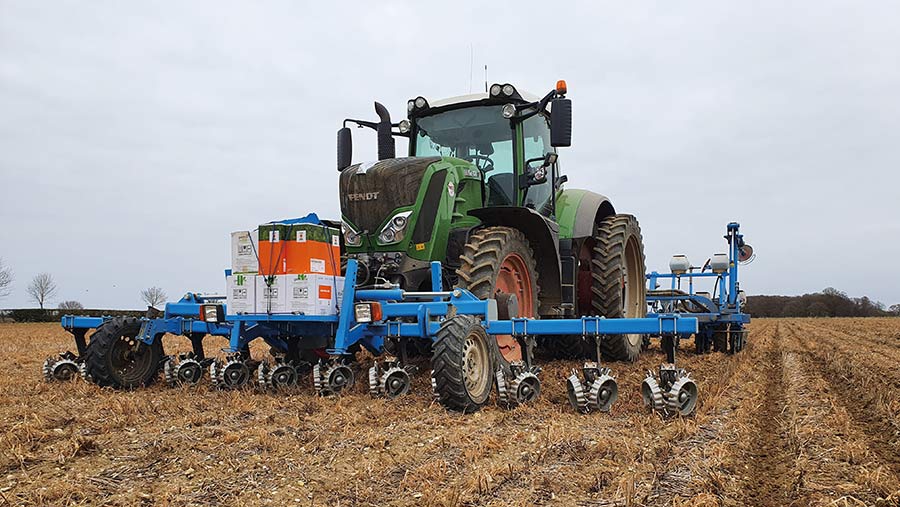 Strip-till sugar beet has reduced workload in the spring, as well as saving costs for Andrew Jacobs, a farmer based in Newborough, near Peterborough.

He is growing 32ha of sugar beet this season on his own 260ha farm, with a further 14ha to be established on a contract farm – all of it strip-tilled.

Mr Jacobs started preparing land for beet using a strip-till 10 years ago because he was finding spring cultivations after ploughing increasingly difficult on some of the more marginal beet land.

“I had a go with strip-tillage and got on as well as I did with a more conventional system.”

He uses a Sly Agri Stripcat to create 15-20cm wide cultivated strips in stubbles on soil types that range from blowing black peats to clay loams.

“You can turn the discs in on the back of the strip-till, so you can leave it as a bit of a bund and then it weathers down,” he says.

After overwintering, a contractor drills the beet with a Vaderstad Tempo precision drill.

“If I do find it has slumped or capped, we can change the tines in the strip-till to Vibra-Tines to loosen it.

“Where I have done that, I find the beet looks better for a short spell probably because you’ve mineralised a little more nitrogen, but the other beet catches up, so it is only worth doing when necessary.”

He adds that care is needed, otherwise you’re back to where you were before with spring cultivations and bringing up unweathered soil.

Yields, he says, are similar to conventionally established sugar beet. This year’s crop has averaged 85t/ha with a best of 94t/ha.

“Once you have the machine, it’s cheaper than ploughing and either power harrowing or cultivating with a spring tine two or three times to get a seed-bed.

“When I’m contracting, I charge £50/ha for the strip-till – I doubt anyone can plough and cultivate for that.”

The reduction in spring workload is also important, while helping to reduce the pressure on getting a good seedbed for the crop. “It’s taken a lot of stress out of the job.”

The system also means he doesn’t need to drill a nurse crop of barley with the beet on his blowing black peats, while blackgrass and weed beet emergence has reduced with lower soil movement between the rows.

Any weed beet that do emerge are controlled using a Garford hooded band sprayer with precision guidance as hoeing is difficult with strip-till.