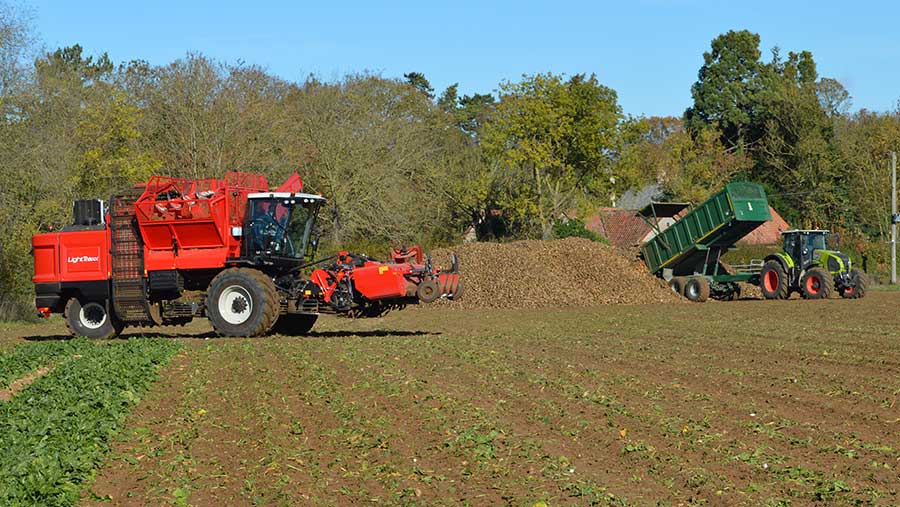 The sugar beet area is set to fall next spring, reflecting a decline in beet prices as British Sugar forecasts a lower beet harvest this autumn.

Britain’s 3,000-plus sugar beet growers are currently harvesting an area of about 105,000ha, but the headline beet price will fall just over 9% for next year while a key seed treatment is set to be banned.

“Looking to the financial year 2019-20, a reduction in beet price has been agreed with our farmers and we expect sugar production to be affected by a lower crop area to be planted in spring 2019,” the group said.

British Sugar did not give an estimate for next spring’s area, but farmers face the prospect of growing beet without key neonicotinoid seed treatments which control aphids that spread the major beet disease virus yellows.

For the current beet harvesting campaign, the group is estimating that sugar production will fall to 1.05m tonnes from 1.37m tonnes in the previous season.

This is largely due to the late drilling of the crop in a very wet spring, followed by the summer drought, with current beet yields lifted being about 65-80t/ha compared with last season’s overall record average yield of 83.4t/ha.

British Sugar’s four beet factories opened about a week later than usual this autumn reflecting the lower harvest prospects, but Bury St Edmunds in Suffolk, Wissington and Cantley in Norfolk, and Newark in Nottinghamshire are now in full production.

The group, which has sugar operations in Spain, China and six countries in southern Africa as well as Britain, said lower EU sugar prices would lead to the group’s overall sugar profits for the current year being “significantly lower” than the previous year.