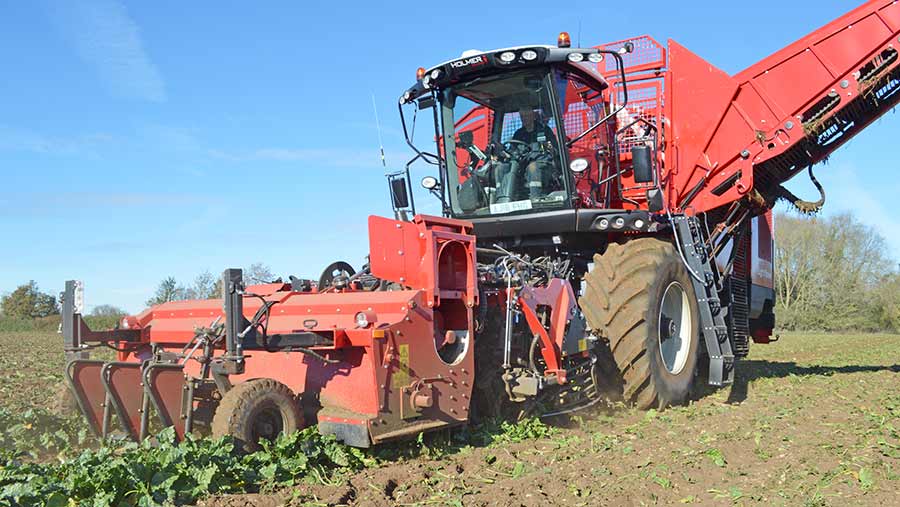 Sugar beet yields are coming in higher than expected following the severe summer drought, with 15% of the crop now harvested and feeding British Sugar’s four plants.

While beet yields will still be down on last year’s record farm yields, it will not be as much of a disaster as initially feared in August after weeks of no rain and soaring temperatures.

Recent autumn showers have helped bulk up the crop and also made harvesting easier after the beet campaign got off to a slow start as farmers lifted beet in bone-dry soils.

Tim Harper, commercial director of the Blankney Estate in Lincolnshire, said his early yields looked to be  down only 10-12% on his five-year average of 79t/ha after much lower forecasts in the summer.

“We are pleasantly surprised and expect yields to be around 70-72t/ha after estimates in the low 60s in mid-August,” he told Farmers Weekly.

The estate grows 500ha of beet and is the biggest single supplier to British Sugar’s Newark factory. It started lifting on Monday 22 October, and expects to continue lifting to the end of the campaign next February. 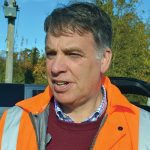 “Drought and high temperatures have curtailed dry matter yields, but a sugar content of 19% is at the top of the range,” he added.

The 5,600ha arable estate, just south of Lincoln, saw record beet yields of 94t/ha last year, with one farm block reaching 100t/ha in a nationwide picture which saw the highest average yields on record at 83.4t/ha.

The estate grows beet largely on limestone brash soils for a 37,000t annual contract for British Sugar, and can comfortable lift 50ha a week with its six-row beet harvester.

The estate crop was drilled 4-5 weeks later than normal, with a start being made only on 18 April. But the crop developed quickly in the warm late spring and 90% of crops were meeting across the rows by 22 June, and yield potential was then thought to be as high as in 2017.

Then the summer drought set in, producing a more stumpy and shorter beet crop with more of the beet crown out of the ground. This year’s national crop area at 105,000ha is largely similar to the previous year. 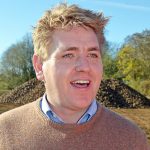 Nick Morris, agricultural business manager at British Sugar’s Newark factory, said early crops lifted across all four of the group’s factory areas are estimated to be typically yielding about 65-80t/ha.

“Early indication are far more encouraging than expected earlier in the season. The drought period hit the crop significantly so we are surprised that yields are so good,” he said.

British Sugar delayed the opening of its four sugar beet plants by about a week after warning that this season’s crop would be “much lower” than the 1.37m tonnes of sugar 2017.

Two of its plants, at Bury St Edmunds in Suffolk and Wissington in west Norfolk, opened on 26 September, followed by Newark on 2 October and then Cantley in east Norfolk on 10 October.

Despite the delay, early lifting was very challenging due to the dry soils and the four processing plants were initially short of beet, but recent rain has helped a pickup in harvesting.

“Drought has clearly led to more variable crops depending on the soil type and the quality of establishment,” Mr Morris added.

One positive for growers is the higher sugar content being shown, with Blankney Estate at 19% and an average across the Newark area of 18.05%.

England’s 3,000-plus beet growers are being offered one-year contracts for next season’s crop at a comparable beet price down just over 9%, but with an increased revenue share and other benefits.

However, Mr Harper is positive for the crop’s future on the estate which has a big proportion of spring–sown crops on its generally light soils.

“We are in the beet business for the long term, so we want to grow the same area next year,” he said. 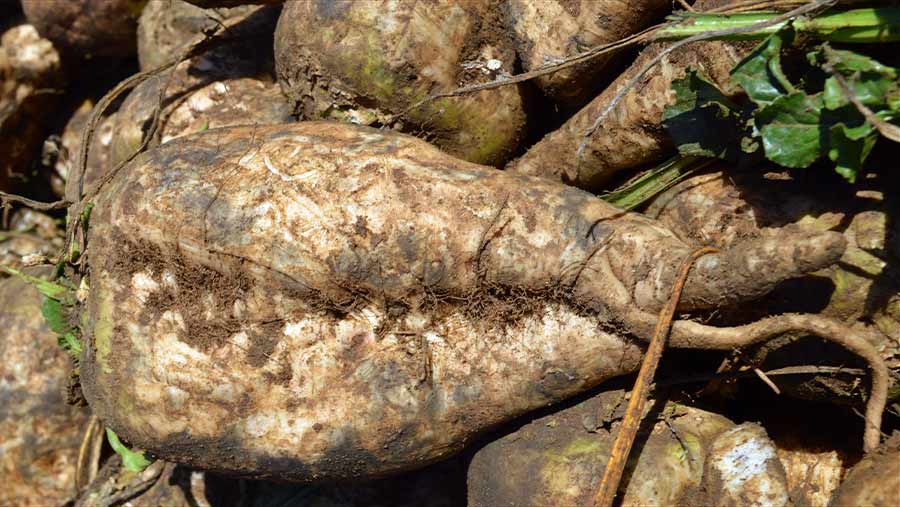 Further south, Doug Pickup has lifted 80ha of sugar beet out of the 360ha he manages in north Norfolk for farming company Sentry, with yields down on his five-year average.

“Last season we had a farm average of over 100t/ha, so this year we are likely to be down 25t/ha after eight weeks in the summer without rain and temperature of over 30C,” he said.

Favourable autumn weather with good rain and sunlight levels has helped late-season growth for the farms he manages to the north-east of King’s Lynn.

Richard Cobbald at South Pickenham Estate on the light Norfolk Brecklands has lifted 45ha of his 200ha of sugar beet, with yields down nearly 20% at 65t/ha, but with high sugar contents of 18.2%.

Yields are down on the estate’s five-year average of 75-80t/ha and last year’s bumper yield of 90t/ha, but the worst of the beet has been lifted so he is hopeful the average yield will start to rise as more beet is lifted.

“We expect 80t/ha in most years and we are down at 65t/ha at the moment, but that should pick up to near 70t/ha as the harvest progresses,” said Mr Cobbald, who is estate manager at the farm near Swaffham.

See how the sugar beet harvest is progressing in this video at Blankney Estate in Lincolnshire with comments from the estate’s Tim Harper and British Sugar’s Nick Morris.