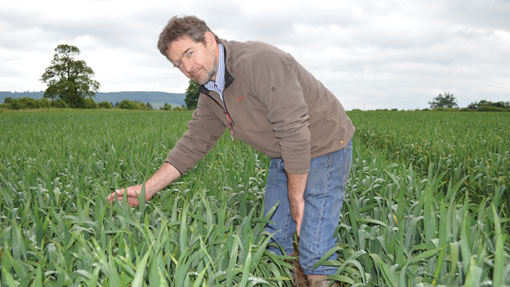 Septoria is the main headache with growing winter wheat in Stephen Klenk’s (pictured) wet Herefordshire climate and he needs to keep this foliar disease at bay to produce high yields.

This wet-loving disease is prevalent in his crops this season after a winter of high rainfall and lack of frosts, followed by plenty of rain this spring.

He is entering a field of Santiago wheat into Adas’s Yield Enhancement Network (YEN) competition and he is pushing up nitrogen, increasing fungicide rates, using SDHIs twice and increasing the use of plant growth regulators.

“Our main problem is septoria and we just have to keep on top of it so we can not skimp on fungicide rates,” he says.