Compared with June’s Cereals event, the main problem for exhibitors at Tillage was not heavy clay but stones and lots of them.

The exhibition site was rated grade three Cotswold brash – a hard abrasive soil that provided some interesting viewing as manufacturers endeavoured to exhibit their wares to the 2500 or so visitors who attended the show.

Most onlookers will have considered the conditions as suitably tricky for those trying to show off new kit, although nowhere on the site were machines asked to work in chopped straw. 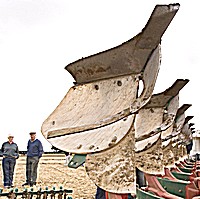 One piece of kit that attracted attention on the tough land was a plough from Kverneland equipped with plastic mould-boards. The composite boards are said to have less of a tendency to allow soil to stick than the steel equivalent and are claimed to really prove themselves when working on heavy land.

The firm says that although the plough is only in the development stages, it may well go into production if trials this year prove successful.

With an empty hopper the unit weighs in at 2400kg and has a minimum power requirement of 120hp.