Cereal growers hoping to avoid a repeat of last year’s severe BYDV infections must be prepared to use an insecticidal seed treatment and should be vigilant if autumn temperatures remain high enough to support aphid activity.

The “perfect storm” of warmer winters, loss of active ingredients and the development of resistance to insecticides in some pest species are all working in the favour of virus-spreading aphids.

One expert warns that BYDV could become the insect equivalent of the blackgrass problem. 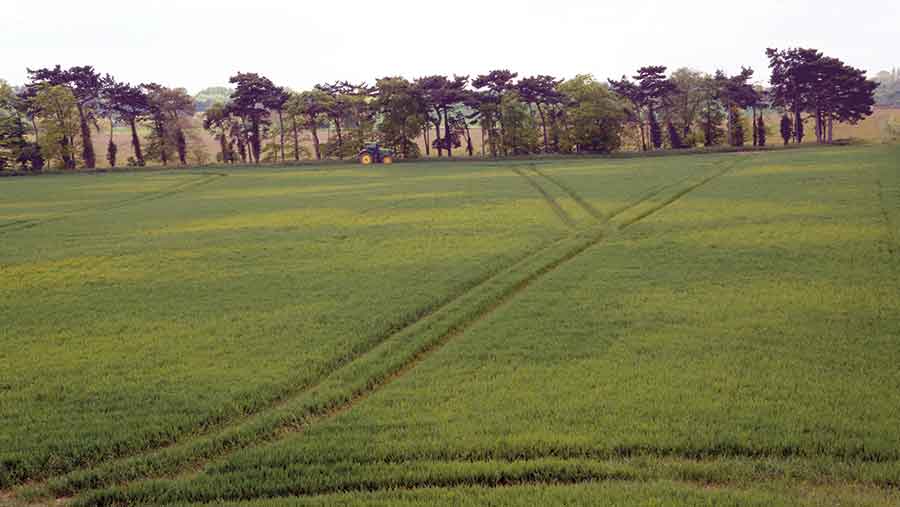 Certainly, it was the combined effect of mild conditions and resistance to pyrethroids in one of the aphid species responsible for transmitting BYDV that contributed to the severity of last autumn’s infections, confirms independent entomologist Alan Dewar of Dewar Crop Protection.

“It was so warm that we had continued aphid activity, right into December, which then allowed secondary spread of the virus through the winter – something that also happened in 2012,” he recalls.

The situation was especially bad where Redigo Deter (clothianidin) seed treatment was not used to protect crops and growers relied on foliar pyrethroid sprays only, reports Dr Dewar.

“The grain aphid, which is one of two main aphid species that spreads the virus, has developed resistance to the pyrethroids and around 50% of the population is carrying the resistance mechanism, according to tests done at Rothamsted Research,” he explains.

Growers and agronomists are being urged to report any control failures and send off aphid samples for resistance analysis, in an effort to help safeguard insecticides.

Live field samples of the bird cherry-oat aphid that unexpectedly survive treatment with insecticides this autumn are particularly being sought, as part of the UK aphid monitoring programme, which is working to detect emerging resistance issues.

Bird cherry-oat aphids are green to dusky brown, with rust red patches at the rear. Currently, there is no known resistance to insecticides in this species, but as there is potential for it to occur, the situation will be monitored closely.

For advice on how to collect a live aphid sample, visit www.cereals.ahdb.org.uk/aphidmonitoring

“So where pyrethroids were the main line of defence, many of the grain aphids survived and were able to do their worst. Unfortunately, their natural enemies didn’t.”

While the largest BYDV patches were found in fields which hadn’t received a seed treatment, even those that had been treated weren’t exempt from infection, he continues.

“There was a further complication in that seed-treated crops which then didn’t receive a follow-up foliar spray were caught by the bird cherry-oat aphid, which is the other main species that transmits BYDV.

“This aphid was still flying late in to the year, thanks to the very mild weather.”

An insecticide seed treatment will give up to six weeks’ protection, which is why a foliar spray can also be required in early sown crops when it remains warm, he adds.

Looking ahead to this autumn, Dr Dewar advises that one of the things that growers can do is to use Redigo Deter treated seed.

“It’s especially important for crops that are going to be sown early. We used to say that it wouldn’t be needed on crops drilled after mid-October, as there were hardly any aphids around in early November when the crop emerged.

“Given recent weather patterns, that’s not so guaranteed now – if its 15C, aphids will be flying. And even though it might not reach that temperature in the shade, if it’s 15C in the sunshine, it’s enough for aphid activity.”

Aphids active at that stage will be looking out for newly emerged crops and react to the contrast between the bright green of the new crop and the dark earth, he reveals.

Dr Dewar acknowledges that late drilling should reduce the level of virus, but points out that the final situation will depend on temperature – especially the occurrence of severe frosts of more than -7C.

“BYDY used to be more of a problem in the South West, where they had milder conditions than the rest of the country. Now, it’s much more widespread.”

As a result, crop monitoring as the autumn develops can be useful, but it is difficult in practice, notes Dr Dewar.

“The bird cherry-oat aphid, in particular, is difficult to see. It can be mistaken for specks of dirt at the bottom of the plant and can even be active under ground level.”

An alternative approach is to make use of the information from the Rothamsted Insect Survey, which gives an indication of individual aphid species activity in different areas.

“It’s interesting to see that there are lots of bird cherry-oat aphids flying at the moment,” he remarks. “They are coming from harvest stubbles and will survive quite happily on volunteers until the new crop comes up.”

The Rothamsted Insect Survey has been running two networks of traps since 1964, providing data on aphids, moths and some other insects.

The distribution and abundance of aphids on a regional scale is monitored by 16 suction traps throughout the UK, which are emptied daily in spring, summer and autumn, and weekly in winter.

Each trap is representative of what is flying over an area with a radius of 80km. Weekly bulletins are produced, showing the numbers of different aphid species found across the 16 locations.

Barley yellow dwarf virus is a disease that affects all cereals and grasses.

Symptoms: The initial symptoms of BYDV infection are normally seen as individual
plants with bright yellow upper leaves scattered through the crop.

Later, as infection spreads, larger areas of the crop become infected, appearing as patches of bright yellow and severely stunted plants. BYDV is most damaging to plants infected at early growth stages; plants can be killed by very early infections.

The effects of BYDV may be exacerbated by other stress factors such as adverse weather conditions, soil acidity and other pests and diseases. 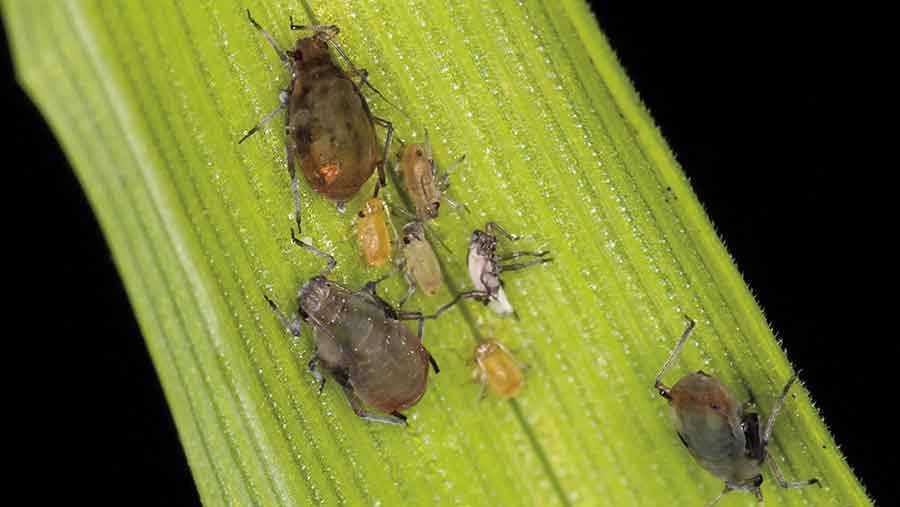 (2) Grain aphids may be green, red or brown with black legs 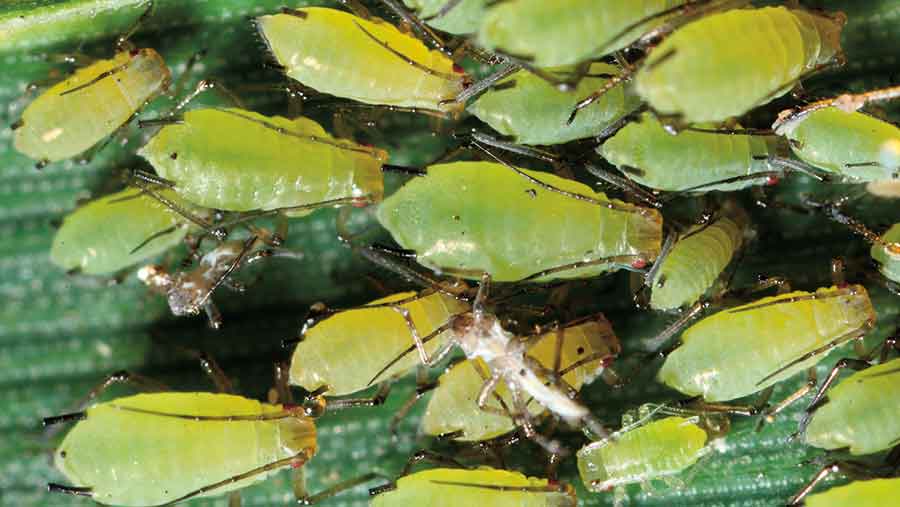