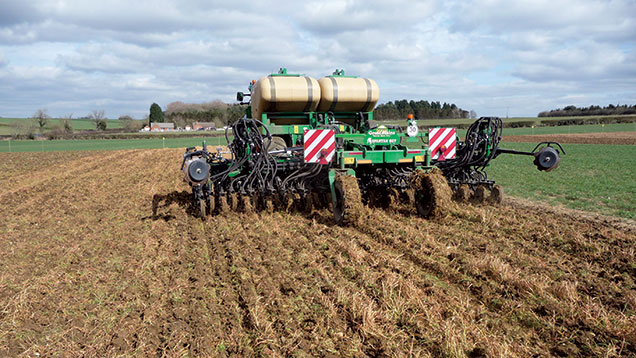 Growing an autumn-established cover crop of black oats and vetch followed by a spring crop can help control resistant blackgrass while maintaining a profitable rotation on heavy land.

However, careful spring management is critical to ensure the technique delivers this control.

“We know spring cropping offers most potential when it comes to non-chemical blackgrass control, but it is challenging on heavy soils.”
Mark Hemmant, Agrovista

Success will hinge on decisions taken over the next few weeks.

Correct cover crop destruction and establishment of the following crop will be vital to maximise blackgrass control and profits, he advises.

“A good understanding of the principles is important. We know spring cropping offers most potential when it comes to non-chemical blackgrass control, but it is challenging on heavy soils.

“The main aim of using a black oats (Avena strigosa) and vetch cover crop is to draw moisture out of the soil over winter to enable a spring crop, most probably wheat, to be established successfully at the optimum time.

“The cover crop is not there to smother out the problem – we want to maximise blackgrass germination before spraying the crop off in the spring.

“This will help reduce the seed-bank as much as possible,” Mr Hemmant stresses.

Careful destruction will be needed to ensure overwintered blackgrass plants are not transplanted. A split dose of glyphosate plus Companion Gold (adjuvant) should be used.

The first spray should be applied two to three weeks ahead of the planned drilling date of the subsequent crop and the second a few days before drilling, to allow time for an effective kill, he advises.

Thorough desiccation will also minimise the amount of green trash, easing crop establishment, which must be done with a direct drill to minimise soil disturbance, says Mr Hemmant.

“This is where a lot of people go wrong. We don’t want to incorporate the cover crop or create a deep seed-bed – the last thing we want to do is encourage a flush of blackgrass in the spring, or pull up wet soil.

“The cover crop dries out the soil at depth and improves soil structure significantly to enable direct drilling to take place.

“We believe that an additional important factor is that the cover crop residue keeps the upper soil damp, which helps minimise soil disturbance between the rows and avoids creating a seed-bed for the blackgrass. It may not look very pretty, but it works.”

The heavy-land site contained a background infestation of more than 500 heads/sq m.

The cover crop – a blend of black oats and purple vetch called Chlorofiltre 26 – was combi-drilled at 25kg/ha on 3 September. It was sprayed twice with glyphosate in March before drilling with KWS Willow.

The resulting crop was almost free of blackgrass, despite a limited herbicide programme, and yielded 8.6t/ha.

A similarly managed plot of spring wheat, direct-drilled after a traditional overwintered stale seed-bed that had been sprayed four times with glyphosate, still contained a moderate infestation of blackgrass, says Mr Hemmant.

“The surface was very dry so easily disturbed and the direct drill and roll was sufficient to create a seed-bed for blackgrass to grow.

“In addition, soil at depth was wet and poorly structured.”

This year, several tined and trailed makes will be tried to see which cope best with the cover crop trash and how much soil disturbance they create, to see what effect this has on blackgrass control and establishment, says Mr Hemmant.

“It’s hard to make any specific recommendations now, apart from making sure you use a direct drill of some sort to maximise the benefits.”