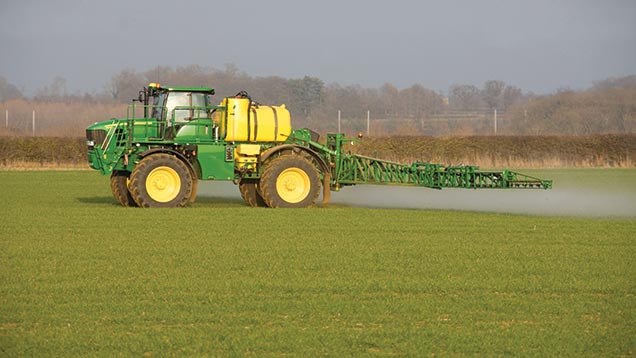 Spring applications with ALS inhibitor herbicides for blackgrass control can be a compromise between plant size and having the ideal conditions.

For this reason, growers should take all the opportunities that become available, even if it means only getting small areas sprayed with Atlantis (iodosulfuron + mesosulfuron) each time, says Gordon Anderson-Taylor of Bayer CropScience.

“The temptation is to mix Atlantis with other early season inputs, especially if there’s a delay. But you will lose a bit of efficacy and there can be a crop tolerance issue.”
Gordon Anderson-Taylor, Bayer CropScience

“The weed is easier to control with the herbicide when the plants are still small,” he says. “So by the time you get ideal conditions for spraying, it can be too late.”

Where enhanced metabolism resistance exists in the blackgrass population, there will be a greater reduction in herbicide efficacy as the plant increases in size, he adds.

“That’s why it’s better to go into crops early in the spring with Atlantis and compromise on some aspects of the treatment than it is to wait.”

Having said that, Mr Anderson-Taylor points out that active weed growth is required. “You also need a dry leaf surface, as well as suitable ground conditions for travelling.”

Up to half of any herbicide’s control comes from how and when it is applied, says agronomist and spraying specialist David Felce.

As every plant matters with surviving blackgrass, accurate timing and application technique is essential for getting the best results, he adds.

“Think about what you’re trying to achieve. Blackgrass is an upright target at the post-emergence stage, so nozzle choice and forward speed should reflect that. And remember that boom height is something that can be altered.”

Fortunately, control from pre-emergence herbicides has largely been good this season, he reports.

“Growers have got 60-80% control from these early treatments, which puts them at the high end of their potential. So there won’t be huge numbers of blackgrass survivors on most farms, unless drilling took place very early.”

He adds that where Atlantis is being used in the spring, it should be applied on its own for best results. “The temptation is to mix it with other early season inputs, especially if there’s a delay. But you will lose a bit of efficacy and there can be a crop tolerance issue.”

This spray is the final shot as far as blackgrass is concerned, he stresses. “So use the most effective herbicide, go early rather than late and be ready to catch every small window.”

For the majority of the past 10 years the best time for a spring application of Atlantis was mid-February, says Dick Neale, technical manager with Hutchinsons.

“But for some reason, it was the first week in April last year,” he says. “That won’t necessarily be the case again and there won’t be many growers who are prepared to wait that long.”

Now that the efficacy of Atlantis is on the slide, there are more questions to be asked about the wisdom of applying a £40/ha spray, he believes.

“Of course, Atlantis controls annual meadowgrass, ryegrass and wild oats as well, so there will be some that do it as a matter of course. But growers in that situation could switch to Broadway.”

If you know that Atlantis isn’t going to give you any more than 35-40% control, there is a cut-off point beyond which you have to think hard about whether it’s worth doing, he cautions.

“If you have 10 plants/sq m surviving, you need to make a decision. Each plant will produce 10 tillers, with each tiller producing 100 seeds.

“It will be difficult to get the level of control you need, even at this low threshold.”

Deciding to spray off a crop after you have invested in it is never going to be easy, accepts Mr Neale. “But there are growers doing that this year. They’ve taken a decision in the interests of the long term, rather than for this cropping year.”

The other option is to spray off bad patches in a field, rather than the whole area, he says.