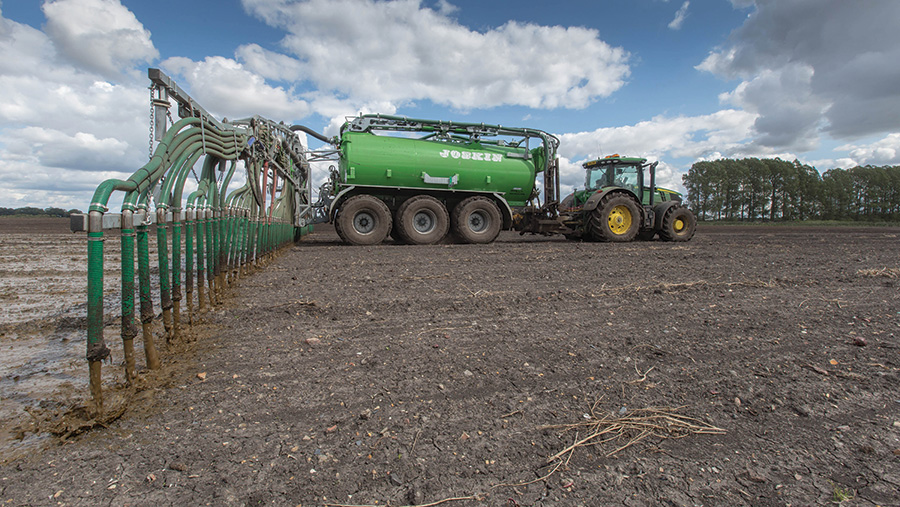 Described as “rocket fuel”, digestate is an excellent biofertiliser that is usually free and in plentiful supply, however, using it incorrectly can prove costly taking years to put nutrient imbalances right.

The proliferation of anaerobic digester (AD) plants means that digestate is increasingly available across the UK, giving some growers the chance to reduce costs and minimise their reliance on bagged fertiliser.

Referred to as the hidden gem of the AD story, digestate is a nutrient-rich substance with a limited organic matter content – or a complete feed for crops.

It should also not be applied:

With the right advice, it can be integrated into farm nutrient management plans to replace manufactured fertilisers, without compromising crop yields or quality.

Analysis done by charity Waste and Resource Action Programme shows that the typical total nitrogen content of digestate is 5kg/t, of which 80% is present as readily available nitrogen.

When applied in spring to a standing crop of winter wheat, about 60% will be taken up.

Digestate also contains useful amounts of phosphate and potash, together with lesser quantities of other nutrients and trace elements.

As a general rule, 50% of the 0.5kg/t of phosphate and 80% of the 2kg/t of potash that it typically contains will be available to the crop in the year of application.

However, the nutrient content of any digestate is directly related to the materials fed into the anaerobic digester, which is why an up-to-date analysis of the supplied material should always be used.

A further consideration is that some digestates are made from food wastes, which have to be pasteurised before they can be used.

Although safe for use, forage crops cannot be cut within three weeks of application.

The best way to think of digestate is as rocket fuel, says independent agronomist and Nuffield scholar John Davies of E&J Solutions, who has been advising on its use on farmland since 2007.

“If you understand your soil, the crops being grown and your farm situation, then you can make sure that you’re using and applying digestate correctly,” he advises.

“It offers great potential to save money and to get your crops performing very well.”

However, it’s important to appreciate that the nutrients it contains are very available, so the potential for either a nutrient imbalance or nutrient lock up is high, he warns.

“The temptation to put on high rates as you’re going through the crop can be hard to resist, but in most situations it should be avoided.”

That’s because any mistakes can take up to five years to put right, he warns. “It isn’t the same as muck, so don’t apply it with a muck mentality. The bioavailability of the nutrients makes it possible to overload crops.”

The most common error is focusing solely on its nitrogen content, forgetting that it supplies a high level of potash too, he points out.

“A rising potash level in the soil can cause quite an imbalance in other nutrients, as well as upsetting the soil pH.”

Don’t forget that sulphur is also found in digestate, he adds. “And if you unintentionally oversupply sulphur, it can lock up selenium.”

There’s little point in making seed-bed applications of digestate to combinable crops, as most are unable to take up the nitrogen efficiently in the autumn, he notes.

“There’s the odd exception, such as oilseed rape, which has a small nitrogen requirement at the start. But otherwise any benefit from an autumn application will be lost over the winter and you have to re-apply it in the spring.”

For this reason, he believes it should be applied at times of maximum crop growth, when the crop has its greatest requirement.

“This is normally from late February onwards through until flag leaf, although as with all fertiliser applications it isn’t advisable to be tied to a calendar date. Ground conditions and crop development should be considered first.”

His rule of thumb is to apply about 25t/ha, topping up the nitrogen if required. “This rate will give you the right amounts of phosphate, potash and trace elements. Some crops and situations will require more nitrogen, which is easy to add.”

He works with a total soil analysis, as well as the potential of the crop being grown and its nutrient requirement.

“As with all fertiliser planning, the decision on how much to apply is based on the crop’s need for nitrogen. You also have to take into account any rotational implications – in the West, there is a history of applying muck to the land, so the soil indices tend to be higher.”

Application can be very accurate, especially with a good operator, believes Mr Davies.

“Applying digestate to a standing crop can seem very scary at the time, but it recovers quickly from having the cord dragged through it.”

Use of a trailing hose or shoe puts the digestate close to the plant roots – increasing the amount of nitrogen available to the crop and reducing losses to the atmosphere.

“Broadcasting digestate can be wasteful – a very small proportion ends up becoming available to the crop.”

Effect of repeated digestate use

Repeated applications of digestate have a very limited impact on soil organic matter levels and soil properties, reports John Williams of Adas, who has been conducting the Waste and Resource Action Programme DC-Agri trials.

“Like slurry, digestate contains a great deal of water, so has a low dry matter content,” he explains. “It means that after three years of applications in our trials, it hasn’t had much effect at all on these factors.”

Its nutrient content, however, is a different story, he stresses. “It supplies lots of available nitrogen, so it is right to think of it in terms of rocket fuel.”

His trials also show that there is no effect from repeated digestate additions on soil total metal and contaminant concentrations.

“This is an important finding. It supports the safe use of these materials on crops grown for food production.”

Growers looking to improve soil organic matter content should consider the use of green compost, he advises.

“Nine years of compost applications were equivalent to 20 years of farmyard manure in building soil organic matter. While green compost was best, food compost was good too.”