Oilseed rape growers taking part in an Adas-organised yield competition averaged 0.5t/ha more than their counterparts in Germany last season, a country that has historically out-yielded the UK.

While the average gross output achieved by the Yield Enhancement Network entrants was 5.24t/ha, the best entries came in at over 6t/ha.

This was the first season that oilseed rape was included in the competition and Pete Berry, head of crop physiology at Adas, has identified some of the secrets to delivering these high yields. 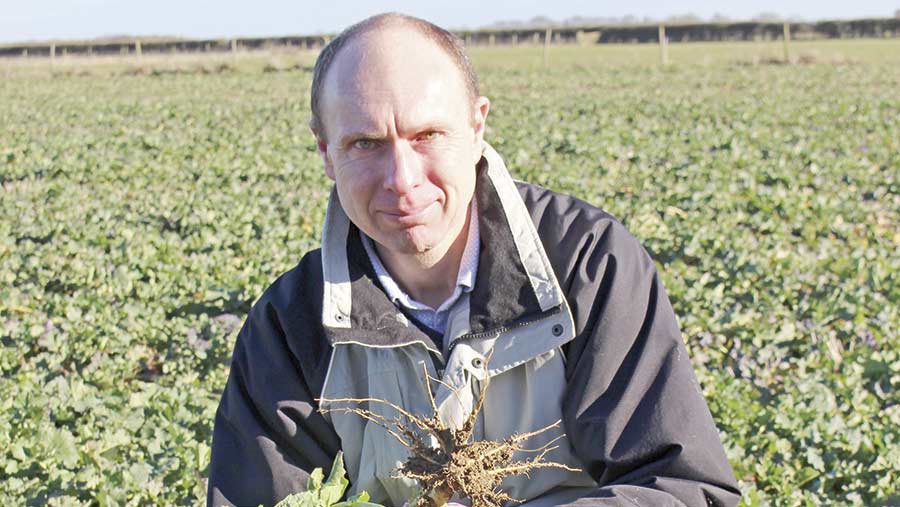 He highlights that for most of the 50 entrants, a good initial establishment phase was followed by a dry, mild autumn and early winter, which gave crops the right foundation and may have increased rooting.

This was then followed by a sunny, dry spring, which meant that canopies were kept in check and didn’t become too big, allowing seed numbers to be maximised – something that proved to be an important factor for high yields.

“A dry spring is often good for oilseed rape,” he says.

“Crops can need whittling back after the winter, so delaying their nitrogen uptake helps to develop optimum canopies. The sunny conditions we saw last April during flowering stage was also beneficial for seed set.”

The only thing missing in 2017 was better seed filling conditions, as disease and lodging levels were low. “The hot days in June hastened senescence and shortened the seed filling period.”

“What was apparent from our analysis was that if you are going to get a high yield, you need to grow the crop to set lots of seed,” continues Dr Berry. “You then need to make sure that you fill those seeds.”

“Both of these things are helped by having an optimum canopy, which is open at flowering and then keeps photosynthesising well into the summer.”

Having taken a closer look at the management of the crops, the top performers in the YEN competition also achieved an extra 10 days from flowering to desiccation, giving the crops more time to set and fill the seeds.

“The winning crops started flowering a bit earlier and then desiccation was delayed.”

Highest yields were also recorded where there had been an extra fungicide pass, although the YEN team could not pinpoint if the timing of that extra spray was important.

There was also a possible effect of magnesium, with the highest yielders having more magnesium in their soil and their seed.

However, there was no obvious correlation between yield and nitrogen inputs and the number of plant growth regulators, or any advantage from growing a hybrid variety.

“It seems that it’s not about how much you apply, its more about when you apply it,” he says.

Dr Berry’s final point is that the two top performers both achieved very high yields from low plant populations. While one of them sowed 30 seeds and established 15 plants, the other planted 45 seeds to get 30 plants.

“We recognise the establishment pressures that growers are up against, but if it’s possible to achieve a modest plant number of 25 to 30 plants/sq m, then this will usually pay dividends.”

This year’s OSR YEN competition remains open for entries until the middle of June, although growers are being encouraged to enter before the spring. For more details, contact Pete Berry at Adas or email yen@adas.co.uk