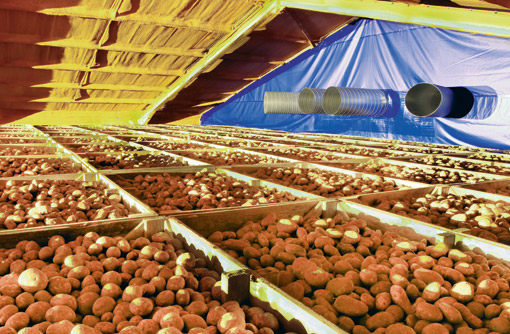 For some growers investing in new positive ventilated store is not possible, but there are some low-cost steps that can be taken this summer to improve performance of existing stores.

“I totally back up the Potato Council message that positive ventilation is the best way to store the crop, but there isn’t the value in contracts for the reinvestment and risk,” says independent potato agronomist John Sarup.

So it is a question of looking at how to fine-tune and get the most for a relatively small outlay. “It is no good just putting the crop into store and leaving it because of the losses due to weight decrease and disease.” he says.

He advocates a thorough store appraisal of how best to increase airflow through the boxes, without allowing it to escape.

Box storage is a simplistic principle and most stores have an overhead air flow system, where air thrown over the top makes its way back to the fan at the bottom.

Air follows the path of least resistance, but it can be made to go through the box apertures by closing gaps at the sides and by putting the boxes closer together.

“This is a step in the right direction. Therefore, when CIPC (chloropropham) is applied distribution is improved.

“An outlay of a few hundred pounds on air divider sheets gives better drying and electricity savings due to decreased fan running hours.”

Fitting inverters and variable frequency drives to the fans increases efficiency and evidence shows that energy savings and better distribution of CIPC pay for the investment, he advises.

Wait for the summer sun to tackle a storage audit

Carrying out a potato store audit this summer could help growers identify ways of reducing running costs for the coming season.

There are substantial savings to be made in running costs, according to Adrian Cunnington, head of the Potato Council’s Sutton Bridge Crop Storage Research Centre, Lincolnshire. He highlights there is a threefold difference in the cost per tonne of potato storage between the poorest and the best.

Doing a detailed self-audit when the store is empty is the first step to improving the performance of existing units and there are four areas to focus on, he says.

Look at fan capacity and air distribution to optimise air flow. “There should be a minimum air flow of 0.03cu m/s/t. You are looking to get sufficient capacity in the store to get effective drying when it is loaded.

“This year many stores had insufficient air flow to dry wet harvested crops,” he says.

“This may sound drastic,” he adds, “but when you consider the small cost of a fan compared with the electricity to run it, it is a no brainer to increase capacity.”

At the same time he suggests adding speed control so that the ventilation rate can be adjusted once the crop is dry. This is especially beneficial in bulk stores. It also allows a slow fan speed to be used for adding CIPC sprout suppressant which gives a more even distribution.

In box stores, Mr Cunnington points out growers should look to improve air delivery. Boxes should be stacked according to best practice to ensure air circulation around the whole store is not restricted and there are no short circuits.

The second area to be looked at is insulation. “There has been a gradual increase in the overall level of insulation because of rising energy prices and there is even more cost incentive now,” says Mr Cunnington.

He advocates that all stores should have a minimum of 75mm of insulation, so existing stores may need upgrading. This could be with polyurethane spray foam or additional board insulation.

“Condensation will occur wherever there are temperature gradients and improvements to air flow as already discussed will decrease it,” says Mr Cunnington. But roof space heating could also be considered so that the air above is kept at the same temperature as the top of the potato stack. This prevents condensation forming in the roof and is the usual method of controlling it.

“Also make any improvements to door and vent seals to ensure that the environment is controlled with no external leakage to compromise temperature control.”

Finally cost awareness and ways to make savings should be looked at, but this is only possible with dedicated metering equipment.

“If you can’t measure what’s going on in the store it’s difficult to quantify any improvements,” he says. “You have to get a handle on what the costs of various measures are.”

Electricity tariffs can be looked at and there are several energy-switching specialists, such as NFU Energy Brokering, to help source the cheapest deals.

Installing speed controls so fans and motors can be managed to match demand can also be looked at to lower energy use.

Mr Cunnington stresses the aim is to maintain a consistent temperature throughout. But he adds that, in his experience, many stores are over ventilated. “Too much air is pushed around and savings can be made by correct use of automated control systems.”