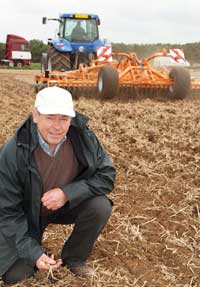 There was plenty of impressive kit at this year’s southern Tillage Event at Cirencester, but how do you choose between them? David Cousins asked independent cultivations specialist David Pullen (pictured) to give his top 10 tips

1 “A lot of min-till isn’t very min,” says Mr Pullen. If you’re working down to 12-14in and moving all the soil across the width of the implement, then you can’t really call it min-till. That feeling of moving a lot of ground may be satisfying, but do you really need to be going down to this depth? 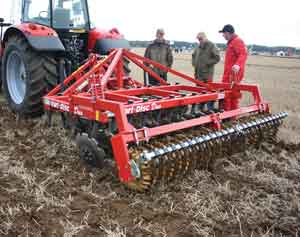 2 This Opico Vari-Disc (right) is one of several machines using the deep tines + angled discs + press format to prepare the way for drilling. Works well if you’ve not got too many weed seeds to germinate, but the finish produced at the event may be a bit loose for ideal soil-to-weed-seed contact.

3 Look out for how adjustable the discs are – this can vary a lot from machine to machine. The sharper the angle, the more the disc will throw the soil sideways which will improve mixing and burial of straw. Likewise the deeper a tine runs, the more upward heave it gives the soil. So look for small wings on deep-running tines and bigger ones on shallower tines.

4 The soil at this year’s Tillage Event at Cirencester was in almost perfect condition, medium loam, ample moisture, some crumbly clods and the straw carted off. A good reminder (if one was needed) that nothing beats the plough for a quality job, though speed and diesel use are best not mentioned.

5 Think about wearing parts when you buy a new cultivator. Can some soil-engaging parts be reversed to extend their life? Check the cost of parts too – they vary a lot from machine to machine.

6 This sounds obvious but is worth saying anyway. Restricting corn-cart trailers to headlands may slow combining a bit, but it’s kinder to the soil. Likewise, if you have a contractor bale and cart the straw, check they are using kit like accumulators or self-loading trailers to minimise running around. If you have to empty on the run, a chaser bin’s better tyre and wheel equipment will cause less compaction than a regular trailer (though they cost more).

7 Even if you’re buying new cultivation equipment, don’t necessarily get rid of the old stuff (like those sets of discs currently residing in the nettles). They probably won’t fetch much second-hand and could still come in handy if you get an unusually wet or dry autumn. On the other hand don’t keep kit that doesn’t fit in any more. 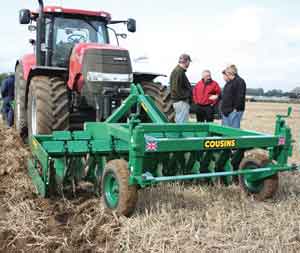 8 Tractors pulling mounted cultivators always benefit from hanging something heavy on the front, but that front linkage could be doing something more productive than simply carrying a front weight. Think about putting something like these Cousins front discs (right) on to tickle the top of the soil and discourage the rear-mounted cultivator from hoiking up big lumps. It’ll reduce the draft too. It is something else for the driver to think about, but if you have a tractor with a headland management system on it, you’ll be able automate the double lifting and lowering at headlands. 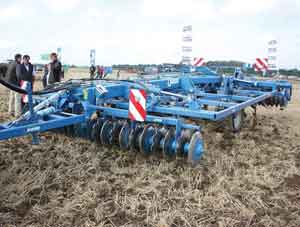 9 Machines like this Rabe Profibird (right) use the sort of top-down cultivation that’s slightly fallen out of fashion. But its discs + wide-spaced tine format gives a tight, weatherproof finish and move everything down to about 8in. There’s a fair bit of straw on top but good soil just under it.

10 The latest-generation tine and disc drills are amazingly good at dealing with trash, so the trashy pre-drilling surfaces that used to scare farmers a few years ago shouldn’t be a problem now. The machines aren’t perfect – discs are expensive and can hairpin (force straw down the slit) and tines are harder to keep at a uniform depth – but the drill should dictate your cultivator choice rather than vice-versa.

11 Although traditional power-harrow + drill combinations were thin on the ground at Tillage 2009, they’re still the weapon of choice for many farmers. A modern 3m unit like this Kuhn will do a good job in almost any conditions, though speed and fuel-use aren’t anything to write home about.