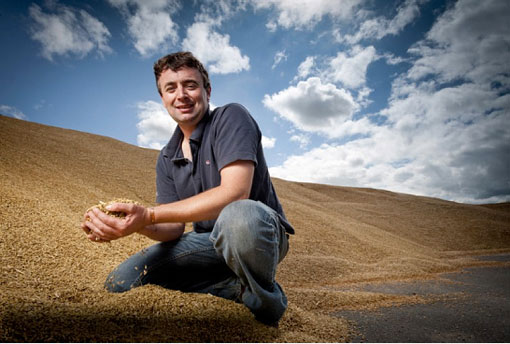 Agritechnica 2011 certainly fulfilled its billing. The diverse range of manufacturers and machinery was impressive to see – innovations in fertiliser and pesticide application were particularly interesting.

Automation of these operations in conjunction with GPS control and mapping will improve overall efficiency and effectiveness of products.

The use of tracks is also becoming more common as machines become larger and heavier. The benefits of tracks over wheels are astounding when I compared the two cultivating this year. It would be hard to return to a wheeled tractor for this operation after experiencing the benefit of improved traction and work rates with the tracks. The tracked John Deere 8345RT was cultivating at 1km/hour faster than its wheeled counterpart – this equates to 0.4ha/hour more when using a 6m Vaderstad Topdown.

Pinpointing the factors that influence high yields will be the focus of this year’s crops. The lack of rain during the growing season made some of the spring barleys on the lighter land struggle, when the rain did fall it was the old adage of “too little to late”. Aphids were attracted by the re-growth and they did seem to cause some yield check compared with crops that were sprayed at this time.

Heavier land yielded the best and Frontier at 9.9t/ha was again the benchmark to compare the other varieties with. The average yield of all the varieties was 8.4t/ha which was slightly up on last year, but could almost certainly be improved on in an ideal growing season. The benefit of the 90 units/acre of sulphate of potash (135kg/ha K2O) at an extra cost of €7/acre (£14.90/ha) resulted in improved yields and bushel weights and will form the basis of next year’s nutrient program. An added advantage is there is no chloride in SOP, which in a high-sodium soil creates sodium chloride, drying out the plants.