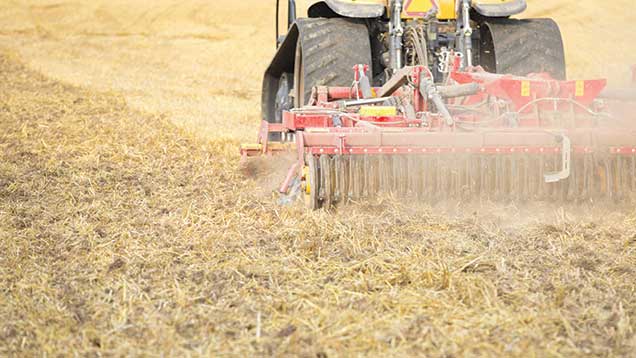 Julian Gold is looking to cut the cost of establishing his oilseed rape as he sees his growing costs are likely to be ahead of the price of rapeseed for this season.

The emphasis is on driving down costs and pushing up yields as the tumble in grain prices has pressured profits on the south Oxfordshire farm where he is farm manager.

His acute concern is that the growing costs of most of the farm’s combinable crops have gone up this year while grain prices have slumped, meaning some will be making a loss.

The Hendred Farm Partnership is part of an estate owned by Edward Eyston. The estate includes let business premises and domestic village houses, while a commercial shoot is run as a farm enterprise.

Soils are predominantly silty clay loams over chalk and average rainfall is 679mm/year. The rotation has been extended to six years, bringing in an additional second cereal spring crop and pushing beans back to one year in six. There is also a 450-head sheep flock.

“Like all farms, costs have run away with us. At this stage, it seems that three of the four crops we grow will make a loss this year. It’s only the winter barley which will wash its face,” he says.

For the other three crops – wheat, oilseed rape and beans – excellent yields will be needed to make any money.

As a result, he has tried a cheaper establishment method to eliminate many of the front-end costs. While it has the potential to cut costs (see table below), he is interested to see if there will be any yield penalty.

“We drilled an area of a field with a very high seed rate of a conventional variety using home-saved seed, letting it develop a thick plant stand to compete against the weeds and allow for losses from slugs and flea beetle,” he says.

The crop was then sprayed with glyphosate in March, with only every third nozzle operating and with the boom touching the top of the crop.

This had the effect of thinning the crop to resemble one that had been established in wide rows. The other nozzles were blocked off, while he used 110deg flat fan nozzles.

No pre-emergence herbicides were used, making it a very cheap method, he adds.

“Eliminating the metazachlor spray saves £50-60/ha and you are not incurring any costs until you know the crop has established well. Then you can alter the canopy and plant architecture,” he says.

This coming year, Mr Gold intends to apply the glyphosate earlier, using 80deg flat fan nozzles, and is extending the trial to a whole field, although he say a very still day is needed for the method to work.

Hybrid varieties are shunned at the farm for their additional costs and harvesting challenges.

“Why would anyone grow hybrids? You need to get an extra 0.3t/ha just to pay for the seed and they grow tall, making harvesting very difficult. They also don’t seem to have any yield advantage over conventionals,” he says.

Mr Gold is farm manager of the Hendred Farm Partnership, which farms 800ha of arable and grassland from his base at east Hendred, near Wantage.

As a AHDB monitor host farmer he is keen to share the farm’s figures and use meetings as a forum for discussing them, with cost control and technical excellence likely to be the focus of the forthcoming 2015-16 season.

“We need to move the business forward. The area we farm has come back a bit, so our fixed costs have gone up. It is all about driving down costs, but driving up performance,” he says.

Feed wheats produced yields of 11.3t/ha last year, providing Mr Gold with his get-out-of-jail card as his costs of production were £100/t and he sold the grain for an average of £134/t.

This year, however, things look a bit different.

“We have budgeted on getting 9.5t/ha, but our costs have increased and are already more than £123/t. We started selling it at £140/t, but it has been falling since. The average is a breakeven figure of £129/t,” he says.

Mr Gold has been experimenting with fertiliser use, both in the number of applications and with variable-rate nitrogen applications.

“We are looking to see whether this is a better way of growing higher-yielding crops. We have made good use of tissue tests as well,” he says.

His preference is for a little-and-often approach, with both macro- and micronutrients being applied over six passes and particular attention being paid to potash.

As a result, this year his fertiliser bill has come to £247.05/ha, which accounts for one-quarter of the crop’s growing costs.

“We have put more nitrogen and sulphur on the wheat than we normally do. But we have taken a P holiday, as the P and K indices are both 3,” he adds.

Mr Gold is sceptical about precision farming and the use of variable-rate applications as he says there are issues with costs and accuracy with satellite-based systems.

To this end, trials with GrowHow’s Isaria sensor are being carried out on the farm.

“We used it for the last dressing in both oilseed rape and malting barley. There wasn’t enough variation in the milling wheats for it to work for the final dressing,” he says.

Mr Gold prefers the idea of a one-off capital cost with a sensor to annual charges with alternative systems.

“But bringing in more costs isn’t what we want at the moment,” he says.

The spring barley being grown this year was direct drilled, incurring an establishment cost of £33/ha.

“We followed the combine with a Shakerator, then sprayed it off in the spring before drilling. The blackgrass kill was very good and the crop looks fantastic,” he says.

Cover crops have been abandoned, after efforts to use them before spring crops.

“They don’t work on this soil type. They just made the soil wetter and harder to cultivate – whether we grazed or sprayed them off. A complete waste of time for us,” he says.