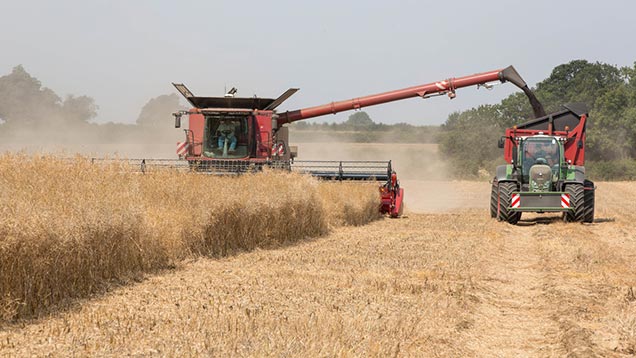 A 30ha plot of the conventional Limagrain variety, which is tolerant for the yield-robbing disease turnip yellows virus (TuYV), was harvested on Monday 20 July at Hutchinsons site in Brampton near Cambridge.

It was grown on a mixed field of heavy clay with blackgrass and a sandy gravel loam subsoil that was slightly drought-stressed in the recent hot, dry conditions.

Similar amounts of varieties Charger and Cabernet were also harvested and yielded 3.8t/ha and 4t/ha, respectively.

“Amalie was a bit of an unknown quality for us because this is the first time its been grown commercially. It always looked better than the other varieties over the year and has done what it promised in terms of yield.”

Earlier this week the crop was combined at 8.5% moisture with on the spot yield measurements peaking at 7.6t.t/ha.

“We can assume that part of the reason for it yielding 5t/ha is to do with its TuYV resistance,” said Mr Neale.

“The virus is spread right across the country now so other oilseed rape varieties will have been vulnerable to it.”

“As with any variety it is early days. Amalie is not a particularly aggressive variety, but it is clearly more robust than others. It has been looking well in most places we have grown it this year.”

He added that the crop had shown some verticillium wilt, but at a lower level compared with Charger, and suggested the drill date could have played a part in this.

TuYV is spread by infected aphids and can cost growers up to 30% of their yield in bad cases.

Signs of an infected crop can easily be missed or confused with other nutritional deficiencies.

Early symptoms of TuYV are purpling of the leaves and later symptoms of interveinal yellowing and reddening of leaf margins are not usually shown before stem extension.