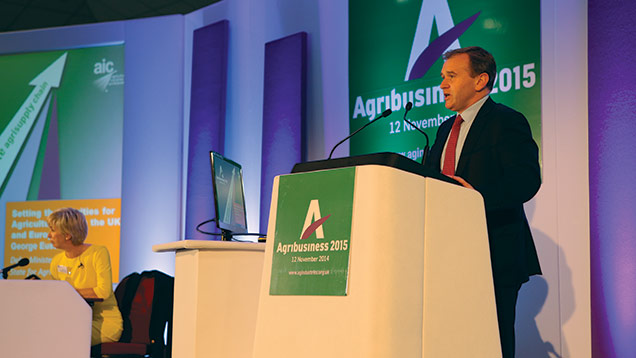 Farm minister George Eustice has called on industry leaders to build alliances across Europe in a bid to fend off further restrictions on pesticides.

Defra was pushing for Brussels to take a risk-based approach to active ingredients, Mr Eustice told this week’s AIC Agribusiness 2015 event on Wednesday (12 November). “The more evidence we have to support us in that, the better.”

A recent industry-funded report warning that EU decisions to ban some pesticides could increase food prices and hit farm profits was an “important contribution” to the debate, said Mr Eustice.

Published last month, the independent report was compiled by farm business consultant Andersons. It was jointly commissioned by the NFU, the Crop Protection Association (CPA) and the Agricultural Industries Confederation (AIC).

Asked how the industry could win the battle in Europe, Mr Eustice said it was important the industry shared that analysis more widely. “I think you should try to find like-minded groups in other European countries to do the same in their national governments,” he said.

“We can try to win the argument around the table, but if you’ve got industry groups marshalling the right kind of message, my advice is to share your evidence with other European sister organisations so they can make the case to their own governments.”

Earlier, AIC chief executive David Caffall said UK farm profits could slump by as much as 36% if Europe pressed ahead with further restrictions on key plant protection products. Some 40 active ingredients were at risk of being withdrawn, he warned.

Thousands of jobs would also be lost if those active ingredients were banned, suggested Mr Cafall. “This report clearly shows what happens when there is a shift from risk-based legislation to hazard-based, politically driven decision-making,” he said.

Ukip MEP Stuart Agnew said the UK faced an uphill battle in Europe. It was only one country among 28 EU member states and representation was disproportionate, he said. “I am an east of England MEP. Seven of us represent 5.5m people. In Cyprus, six MEPs represent 500,000 people.”

The situation was replicated across other smaller European countries, said Mr Agnew. “That is going to make it even more difficult for us. As far as I am concerned, why do we have these people running our agricultural industry? Aren’t we capable of doing it ourselves?”