Vaderstad’s Spirit seeder is designed for high-output drilling on light to medium soils, sowing direct into stubble where appropriate, but more likely as part of a min-till or plough-based establishment system.

Cereal growers on light to medium soils have a new drill option with the introduction of the Vaderstad Spirit.

Developed as a competitor for the likes of Simba’s Horsch Pronto and Kverneland’s Accord MSA drills, the Spirit has a layout comprising two rows of cultivating discs, tyres for consolidating the resulting tilth and twin-disc coulters with individual press wheels. Compared with the familiar Rapid – which Vaderstad says accounts for just over half of trailed drill sales in Britain – the Spirit is lighter, easier to pull and has more emphasis on full-width cultivation and seed-bed consolidation. 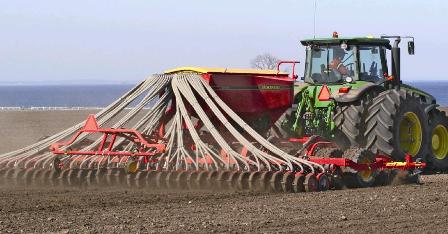 Vaderstad’s Spirit seeder is designed for high-output drilling on light
to medium soils, sowing direct into stubble where appropriate,
but more likely as part of a min-till or plugh-based establishment system.

“The Rapid continues to meet the needs of the great majority of UK farmers,” says Michael Alsop, Vaderstad’s UK managing director. “But for growers on light to medium soils – in north Norfolk, southern England, parts of Scotland and Ireland, for example – the Spirit will be a better choice.”

The initial build of 30 drills being assembled at Vaderstad’s factory in Sweden is of 6m units that will be followed by 8m and 9m versions and later by 3m and 4m variants.

Crossboard levelling paddle tines will be optional next year for drills destined to work on ploughed land. For now, the layout comprises two rows of 430mm discs as fitted to the Carrier cultivator, providing complete soil movement across the full width of the implement.

They are followed by a staggered row of 820mm diameter, 400mm wide packing tyres to conserve moisture and provide a good surface for the double-disc openers.

The coulter arm is mounted on a leaf spring which returns the opener to working depth after it has been deflected.

Central depth adjustment alters the pitch of each coulter arm to change the position of the disc opener relative to the press wheel. On soils prone to capping, the press wheel can be angled from the vertical to work slightly to one side of the seed and minimise risk of sealing the surface.

The opener has one disc slightly ahead of the other to give a good cutting effect. Up to 80kg of pressure is provided by a hydraulic cylinder that also lifts the coulter assembly clear for transport. Seed distributors located outside the 3150-litre hopper are fed from a radar-regulated metering unit.