Anyone farming on mixed soil types knows how dramatically crop growth can vary within the same field. Plants thrive on deep, fertile areas to produce lush canopies, yet growth on poorer land can be much slower and sparser.

Such variable growth creates significant challenges for agronomy, particularly when it comes to deciding on optimum rates of fertiliser or plant growth regulator (PGR).

What may be right for one part of the field could be too much or too little for other areas, resulting in problems such as lodging, uneven ripening and yield differences.

The firm’s Simon Griffin warns that blanket PGR applications of a single rate across fields with varied crop cover may benefit forward areas that need holding back, but risks a detrimental effect on any plants already struggling to grow.

Soyl research suggests a yield response can be obtained from applying a PGR to oilseed rape with a leaf area index (LAI) of 0.8 or above by the green/yellow bud stage, whereas there may be a yield penalty when applied to crops below this threshold.

“Putting a PGR on plants that don’t need it reduces crop height even further, wasting product and money. It’s far better to accurately target applications where they are needed.”

Soyl has been trialling variable PGR applications in winter oilseed rape for several years and is examining the potential in wheat (see case study below). Mr Griffin acknowledges variable PGRs in cereals require more care, especially where products are applied in a mix with a fungicide.

“Oilseed rape is generally a better fit for variable PGR applications, as growers are less likely to have other products in the sprayer tank. This allows rates to be varied without compromising efficacy of any tank-mix partners.”

Farm trials last year recorded a winter oilseed rape yield increase of 3.5% (0.2t/ha), worth about £50/ha at current prices, from varying PGR rates applied at the green-bud stage. This compares with an additional cost for the service of just £2/ha.

“The more variable the soil type and crop canopy, the bigger the benefit is likely to be,” says Mr Griffin.

How do variable PGRs work?

The process for variable PGR applications is very similar to that for fertiliser. An up-to-date satellite image is used to generate a digital map of the field which highlights variations in crop canopy cover – called a normalised difference vegetation index (NDVI) report. This can then be converted to a canopy GAI map.

The GAI report is downloaded into the grower’s Soylsense account and models on the website are used to produce a PGR plan which assigns different product rates according to the crop biomass zones highlighted.

Thick canopies (such as oilseed rape >1.0 GAI) may be assigned full-rate PGR, while nothing may be allocated for thin areas (GAI <0.5). Quarter, half and three-quarter rates can also be set for varying levels of growth in between, although the precise product rates and growth thresholds are down to the farmer and/or agronomist to decide.

“Our system provides satellite images from February to May, so it is simply a case of logging into your account to download the most recent image prior to any PGR application,” says Mr Griffin.

The PGR data file can be saved in any format required by the GPS control unit on the farm’s application equipment.

How accurate is it?

Resolution of digital satellite maps can be down to the nearest 1m, but rarely is this level of detail needed, says Mr Griffin.

The biggest limit on precision is sprayer boom and tramline width, he says.

“Most sprayers don’t have the ability to vary applications across the boom with automatic section or nozzle shut-off, so although rates can be varied as you travel across the field, most operators can only do so across the full width.

“Even so, being able to adjust rates to within 24m or so is a huge step up in accuracy from a single rate for the whole field.”

Soyl is examining the potential for variable-rate PGR applications applied through independently controlled nozzles to see if there is an additional benefit from such accuracy.

Mr Griffin warns operators to ensure sprayer nozzles are approved to deliver the range of rates proposed by any variable-rate plan by checking manufacturer guidance first. 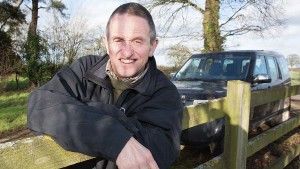 Two of the farm’s most variable fields, 21ha and 26ha in size, were used to test variable-rate plant growth regulator (PGR) application, which delivered an average yield increase of 5.5% (0.4t/ha) over a flat-rate approach.

“A lot of our land has undulating topography and variable soil that can change several times in the same tramline, so we often get crops at different stages,” explains Mr Beddows.

“The fields we tried last year were variable in different ways. One was very flat with big changes in soil from gravel to deeper, heavier areas, while the other had much more variable topography.

“Smaller plants on the chalky outcrops don’t want much PGR, especially if they are under stress, while the more advanced wheat on deeper, richer soil in hollows or valleys needs a good dose to avoid lodging.”

PGR application plans were produced from the same satellite maps used for variable-rate nitrogen on the farm. “We downloaded the latest NDVI map from Soyl and set up a workplan in Gatekeeper. This was exported to our sprayer’s control unit.”

“The system was programmed to set up a grid pattern across the field so we could compare the flat-rate and variable-rate areas side by side. There was a difference in the evenness of crops where rates were varied, especially on thicker patches, and it was nice to see a yield benefit.”

No difference in disease levels was seen and Mr Beddows believes as the technique was used at this early T0 fungicide timing there should not be any effect on yield, even if control does vary.

“We used the same amount of PGR overall, so I think of it as a way of applying PGRs more efficiently rather than making savings. It’s great if there is a saving, but that’s not the driver.”

Mr Beddows acknowledges variable PGRs are still a “work in progress” and have most potential for growers on variable soil types who have the equipment needed to apply variable rates.

He plans to try the approach again on a similar area this spring. A 40ha field will have PGR rates varied according to soil type on one half and canopy maps on the remainder.