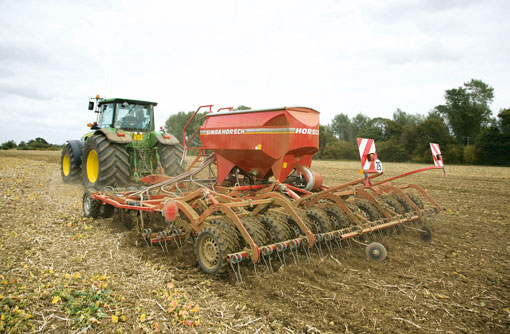 Winter wheat yields in 2011 were 0.75t/ha below the five year average, according to the results of the Recommended List trials.

Likewise, winter barley also suffered, being 0.5t/ha below the average. Only oilseed rape fared better than expected, with yields in the northern region being 0.45t/ha above the same average, while yields in the east and west region showed an increase of 0.48t/ha.

“What’s been very interesting about this year is that varieties which were consistently high yielding before have remained on top,” reports Simon Oxley.

“The growing season didn’t cause any particular upsets or change the order in any major way.”

First wheats and crops grown on heavy soils fared best of all, he continues. “The overall winter wheat average for 2011 stands at 9.53t/ha, but there were regional differences. Crops in the east averaged 8.7t/ha, whereas those in the west did 10.2t/ha. In the north, the average was 9.1t/ha.”

There’s no doubt that the dry spring caused the most stress in the east, notes Dr Oxley. “Crops on heavy soils, whatever the region, did the best. Our analysis shows that yields on heavy soils were 10t/ha, compared with 8.7t/ha for those on light soils.”

As might have been expected, first wheats came out on top with an average of 9.6t/ha, while second wheats reached 9.1t/ha.

Before highlighting individual variety’s performance, Dr Oxley points out that the development phase of a variety did have an effect in 2011, with some of the earlier developers yielding below their five year average.

“That’s why the five year average figures provide a more realistic picture as to how varieties are likely to perform in a range of seasons. Next year could bring us a completely different weather pattern.”

Varieties which develop rapidly in the spring, such as Einstein, were at a disadvantage, as their growth spurt coincided with the onset of the drought, he notes.

“In contrast, the later maturing types were able to benefit when the rain eventually arrived.”

“The drought didn’t affect these varieties. They were already high yielding and have remained at the top of the pack.”

In the untreated trials, two varieties stood out. Stigg achieved 121%, while Warrior came in at 118%. “Again, they’ve showed why they are on the list and have performed as we would have hoped.”

As already mentioned, Einstein came in below expectations at 95%. “But we know why,” remarks Dr Oxley. “In a different year, it would have been closer to its five year average of 97%.”

There were also varieties which did exactly as expected, he continues. “A good example is JB Diego. The 2011 yield was 105%, which is spot on. That’s very reassuring for growers, who have shown how much they value consistency.”

Of the candidates, it was a similar picture, with none being turned on its head by the growing season. “By and large, the highest yielding candidate varieties are still ahead. There haven’t been any shocks.”

“We’ve got a good bunch of candidates which, without exception, came through the season very well.”

But vigilance is required in the future, he warns. “The UK Cereals Pathogen Virulence Survey (UKCPVS) has picked up new races of brown rust and yellow rust, which could affect any resistant varieties in the future. So growers are going to have to be careful.”

As with wheat, the lower overall winter barley yields didn’t change the pecking order, with two varieties being singled out by Dr Oxley.

“The top two-row variety was Retriever, with a yield of 113%,” he reports. “It was already the highest yielding, so that hasn’t changed. But neither has its specific weight issue, which has put some growers off.”

The best six-row was the hybrid variety, Volume, which came in at 116%. “Again, nothing has changed and there haven’t been any surprises.”

Virtually all of the other winter barley varieties produced a very similar performance to their existing results, he adds. “Although all the yields were lower, there haven’t been any particular winners and losers. It’s business as usual.”

In sharp contrast to cereals, the season suited oilseed rape, with yields in both regions being above the five year average.

The east and west region saw a rise of 0.48t/ha, while the north achieved 0.45t/ha more than usual.

“In the east and west region, we have three varieties vying for the top spot,” reveals Dr Oxley. “Excalibur, DK Cabernet and PR46W21 all finished on 107%.”

Their performance was in line with expectations, although Excalibur’s 2011 yield is above its five year average of 102%, he points out.

“Both hybrids and conventionals did well, so there wasn’t a clear advantage of either type.”

Two varieties which didn’t do as well in 2011 as their previous results suggested are Compass and Sesame.

“They were both down slightly. There aren’t any obvious explanations for this and we may see their fortunes reversed again in a different year.”

Year on year consistency also came from the likes of Fashion and Rhino, he notes.

In the north, there are fewer trials carried out, so the results have to be considered in that context, advises Dr Oxley.

“Both Excalibur and DK Cayenne did well, at 106% and 105%, and were consistent with previous years. Compass and Fashion were down a bit on last year, but that’s with a smaller data set.”

Top performer in the north was candidate DK Expower at 109%, while the semi dwarf variety PR45D05 did better than its previous performance, coming in at 102%.

Existing choices, Catana and Cuillin, were also consistent, he ends.

How the West Was Won

Winter wheat yields were exceptionally good across the board in the south west, reflecting the RL findings, agrees Paul Taylor of Pearce Seeds in Dorset.

“The long grain filling period allowed crops to finish properly,” he says. “And although it was an unusual year in that respect, we only had the odd surprise in the variety pecking order.”

“JB Diego is our biggest seller, so it was good to see it performing so strongly,” says Mr Taylor.

Wheat varieties most suitable for growing in the south west need to have good septoria, fusarium and sprouting resistance, he explains.

“There’s quite a lot of maize grown in the rotations down here, so fusarium is a particular consideration. Both of the top two, JB Diego and Panorama, have the all important fusarium resistance.”

In winter barley trials, the best varieties proved to be Volume, Florentine and candidate Sinatra. “We need the rhynchosporium and net blotch resistance that these varieties have to offer in this part of the world. And the choice matters too, as not everyone wants to grow a hybrid.”

In Shropshire, JB Diego also topped the variety trials done by Spunhill Farm Sales, with a yield of 11.754t/ha.

Agronomist Bryn Thomas wasn’t surprised with the result. “It’s a reflection of what it’s done on farm. It suits this area.”

Alchemy also performed well, as did Warrior. “The dry spring meant that we didn’t get the septoria pressure that we usually see. Yields have been very good this year.”

Oakley was disappointing at 9.58t/ha. “It was a surprise,” admits Mr Thomas. “It’s done better than that in the area, so we won’t dismiss it.”

Surprisingly, KWS Santiago didn’t stand out either. “It does have one or two disease weaknesses, but they can’t be blamed because disease levels were low. Even so, it will still have a following in this area, as it is mainly down to feed wheat.”