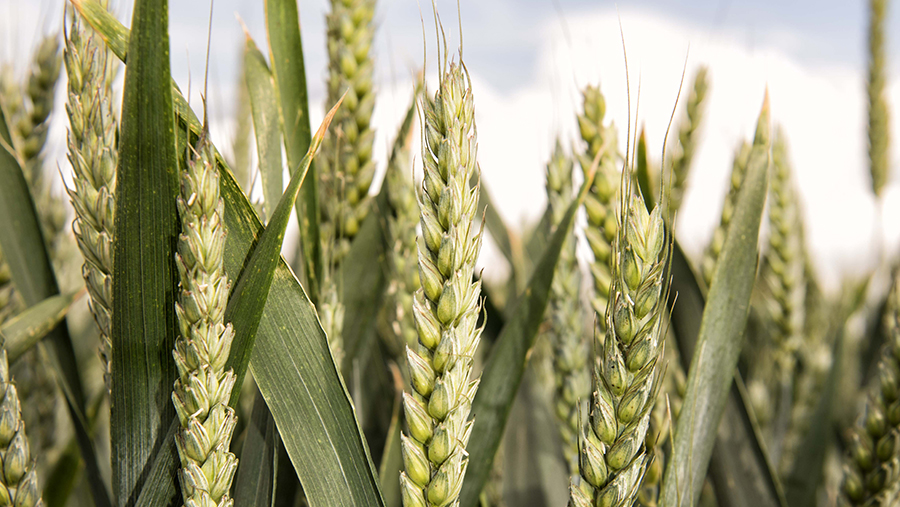 Seed trade experts picked out the possible winners from the wide array of 29 new cereal and oilseed rape varieties that were added to the AHDB Recommend List for 2017-18.

Their focus was on disease resistance, grain quality and standing power, as well as out-and-out yield to help growers cope with a squeeze on their profit margins from higher costs and lower prices.

They selected five new winter wheat varieties to consider for next autumn’s drilling, as well as new winter and spring barleys and oilseed rapes likely to appeal to hard-pressed growers.

Five winter wheats are being tipped for success from the plethora of new varieties making the Recommended List due to grain quality, stiff straw and disease resistance, as well as yield.

Top-quality milling wheat Zyatt along with feed wheats Bennington, Sundance, Kerrin and Dunston are expected to do well next autumn out of the 11 wheats making the list, according to the seed trade.

Breadmaker Zyatt looks as if it will be a good partner for the popular milling variety Skyfall, while among the feed wheats, traders were focusing on specific weight, standing power and septoria resistance.

Chris Guest, seed manager at Gleadell, says the variety shows a similar protein level to Skyfall, with the highest untreated fungicide yield of the breadmakers.

“This looks a good all-round variety and will be a good partner to Skyfall and Crusoe for the milling wheat growers,” he says.

David Waite, northern seeds manager at distributor Frontier, adds that the variety give a yield advantage over Skyfall, with high grain protein levels.

Among the six soft feed varieties added, Mr Barker picks out Bennington from Elsoms Wheat as his top choice. It is recommended for the east and west region.

“The variety came out as the top-yielding soft feed wheat in our trials and it has good grain characteristics and good standing. This is the best of the bunch for England,” he says.

It has the joint stiffest straw of the six soft feed newcomers, with good specific weight (76.7kg/hl), although not as high as the 77.7kg/hl of Leeds.

Sundance from Limagrain matches the yield of Bennington while giving the highest resistance to septoria on the whole list, making it a very useful variety for the wetter growing areas of the West and North.

“The breeder has shown a step up in terms of yields and good disease resistance with this variety,” says Mr Guest.

Its disease rating for septoria at 7.3 is above Siskin (6.8) and Crusoe (6.7), with the AHDB describing the variety as a “breakthrough in achieving good resistance and high yield”.

Agrii’s Mr Barker believes it may find a place in the south-west of England because of its good resistance to the wet-loving septoria, but adds the variety does not have a particular high specific weight (74.5kg/hl).

Two other varieties, Savello from Syngenta and Hardwicke from KWS, are likely to find interest in the North, where they are recommended because they are suitable for distilling. Both are earlier to mature than the popular varieties Leeds and Revelation.

Motown from Limagrain is the earliest-maturing of the soft feed wheats, while Moulton is also early and both could be suitable for distilling in Scotland.

Frontier’s Mr Waite picks out two varieties from these six. First, Motown for use in Scotland due to its early maturity and good disease resistance, and second Sundance for its high septoria disease rating.

Among the hard-milling feed wheats, Kerrin is the highest-yielding variety added to the list. It shows a 2% higher yield than last year’s top-yielder Silverstone, with traders picking this variety out along with Dunston to do well next season.

Kerrin, from KWS, looks a fine variety with good grain quality, although it has a slightly low score for septoria resistance (5.2), says Mr Barker.

“Both will have a place, as there is a difference in maturity, with Shabras being the early variety,” says Mr Guest.

Mr Waite has these two as his picks from the four new hard-milling feed wheats with both having a good spread of disease resistance, apart for Shabras’ weakness on brown rust (4).

Of the other two hard-milling feed wheats, Dunston from Elsoms has the highest untreated fungicide yield of all recommended wheats, reflecting its good disease resistance scores, with a 6.7 for septoria.

Another variety from Elsoms, Freiston, could find interest in the West as, like Dunston, it is tall strawed and so useful for growers with livestock.

All three new varieties are early ripening, so they could find a particular slot with growers in northern England and Scotland, with Sunningdale and Creswell favoured, say seed traders.

Sunningdale is the latest hybrid six-row variety from Syngenta, and although it gives a similar yield to Bazooka nationwide, Sunningdale shows a 4% advantage when grown in the North.

“The variety has performed well in the North, although it does not have the grain quality of Bazooka,” says Mr Barker.

For this reason, it could become a “northern Bazooka”, but its specific weight of 67.2kg/hl is behind Bazooka’s 68.2kg/hl, which may be a consideration after the winter barley harvest of 2016 produced generally small grain size.

Two-row variety Creswell from KWS follows a long line of varieties from the breeder, from Glacier and Tower through to Orwell, and yields 2% ahead of the next-best two-rower in the North.

“There is a yield advantage in the North, while it is a good all-round variety with early maturity,” says Mr Guest.

The third newcomer, the conventional six-row Funky from KWS, could take some market share from Meridian in Scotland due to its higher yield. Itis shorter strawed than any of the hybrids.

Mr Waite picks out Sunningdale and Creswell for northern growers to consider for next season.

“These show high yields from Yorkshire northwards. Both have early maturity, while Creswell does a bit more than Tower in the North,” he says.

Opera looks the pick of the three new malting spring barley varieties added to the list. It could find a place in Scotland as it is early maturing and is suitable for distilling.

All three varieties are awaiting full approval by the maltsters, so their uptake and ultimate success will depend on these malting tests.

Opera from Limagrain is a dual-purpose variety that can be used in brewing and distilling as it does not produce glycosidic nitrile (GN) compounds in the malting process, which can be toxic when used for distilling. These are known as non-GN varieties.

The variety could take some market share from fellow Limagrain non-GN variety Concerto, which is the most popular spring barley variety in Scotland, as Opera has a 10% yield advantage.

Mr Barker says Opera is good for yield and could go for distilling, while Mr Waite adds the variety could be a replacement for Concerto.

The variety yields 104%, just behind Laureate at 105%, which has provisional approval for both brewing and distilling.

Chanson, from Saaten Union, is the first recommended variety lacking a gene for lipoxygenase production, which is claimed to keep beer fresher for longer.

This is a similar trait to the null-lox barley varieties that Carlsberg and Heineken used in their beer, so the variety’s success will depend on how the malting and brewing industry favour it.

The third variety, Dioptric from Syngenta, is recommended for the North, and is currently under test for use in grain distilling.

The variety could potentially replace old favourite Belgravia for this specific use as it has an 11% yield advantage, but much depends on whether it is approved for use by the grain-distilling industry.

The hybrid variety Aquila looks the pick of the four varieties added to the oilseed rape lists with a good all-round performance that caught the eye of the seed trade.

The variety from Limagrain with a gross output of 108% comes close to top variety Elgar on 110%, with stiff stem and good disease resistance. It has a 6 for light leaf spot and 8 for phoma.

Mr Waite picks out conventional variety Flamingo as it has the highest score on the list for light leaf spot resistance at 7.3, but it does have a lowly score of 4 for phoma.

Another conventional, Limagrain’s Nikita, is now being recommended UK wide, after being just approved for the North. Again, it has a good light leaf spot score of 7.

“Although Nikita and Flamingo have lower ratings than some other hybrids for stem canker [phoma], with a good autumn spray programme in place that can be controlled,” says Mr Leaper.

Secret from Monsanto is a semi-dwarf hybrid variety with a gross output down 10% on the top variety Elgar, but it is 6% ahead of fellow semi-dwarf Troy.

These semi-dwarfs can be of interest for exposed or fertile sites and for early drilling, but with a low yield, some traders say there is not a big demand and no sign of a big switchover.

The variety does have good disease resistance, with a 7 for light leaf spot and an 8 for phoma, as well as being early maturing.

Two new spring wheats were added to the list. Cochise and Chilham are both Group 2 milling varieties, while there were three new winter oats – two husked varieties, Victorious and Griffin, one naked variety, Peloton, and two husked spring oats, Yukon and Elyann.