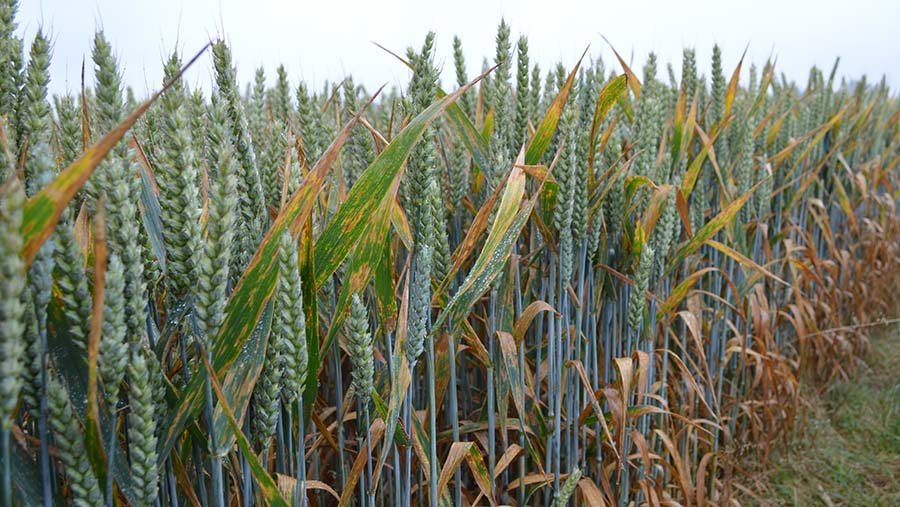 Winter wheat varieties Firefly and Saki are showing susceptibility to certain strains of septoria, and wheat growers will likely have to increase their fungicide spend to keep the disease under control.

Reports of these two varieties showing septoria emerged in late May and came as a surprise as they had previously had good resistance ratings to the disease, but this came after many growers cut back fungicide use in a dry spring.

Bill Clark, technical director at crop consultant Niab, says the two varieties, which have the older wheat variety Cougar in their parentage, showed patches of slightly more orange septoria than normal high up in the crop canopy.

Untreated fungicide Firefly crops were showing septoria on leaf two, similar to that on susceptible variety Barrel, but he believes the new strains can be controlled.

“These two varieties should be treated like Barrel using new chemistry and good rates,” he tells Farmers Weekly at the Cereals 2021 event in Boothby Graffoe, Lincolnshire. 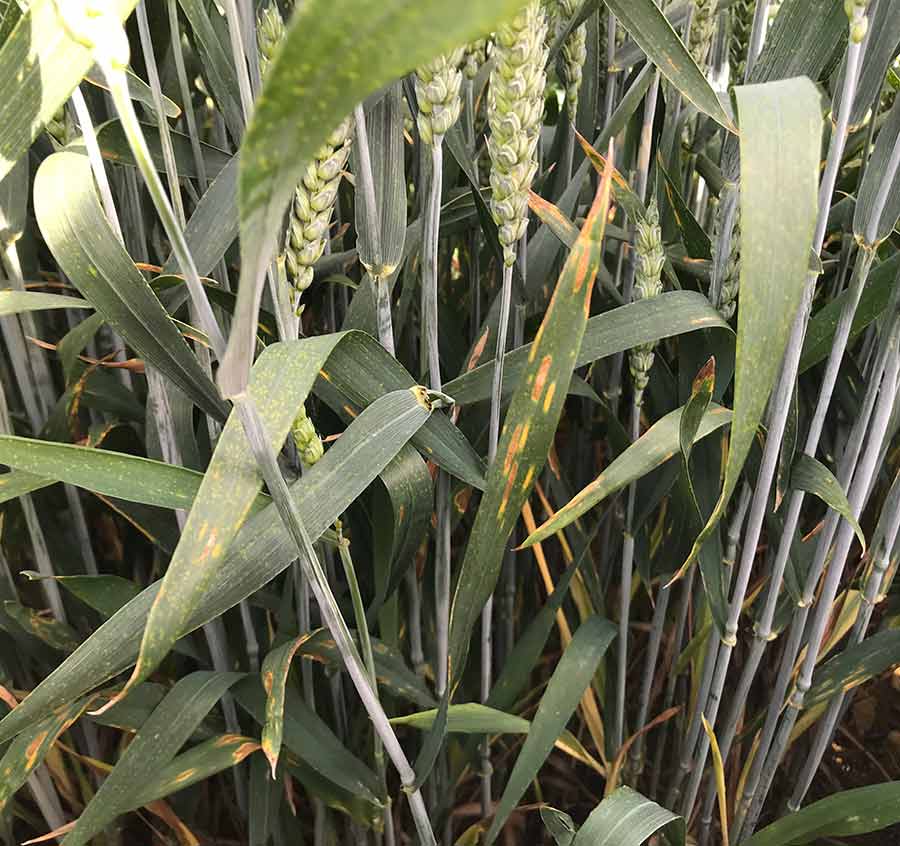 Mr Clark says these new strains are likely to be controlled by new fungicides like the Revystar and Univoq, but this will push fungicide costs up to about £120/ha from a previous £80/ha.

These increased costs are compared to a variety with good septoria resistance such as Extase, which Mr Clark thinks wheat growers should be able to limit fungicide costs to £70-80/ha.

The Cougar septoria strains developed in a season when a high proportion of T1 sprays were applied too early, which left a long gap between T1 and T2 sprays, and then wet weather in May made the season a high risk one for septoria.

In addition, this was the first full season without the valuable and popular multisite protectant fungicide chlorothalonil which is now banned.

The Cougar septoria isolate effect is seen only in some varieties, such as Firefly and Saki, and has not been seen in others with Cougar in their parentage such as Quasar, Astronomer, Illuminate, Swallow, Prince and Merit.

The two varieties did have good resistance ratings to septoria with Firefly scoring 6.8 and Saki 6.5 in a 1-9 scale, where 1 is susceptible and 9 shows good resistance, while Barrel is rated at 4.2.

The two ratings are likely to now come down, and Mr Clark says these varieties came through the AHDB Recommended List system in low septoria years and their ratings would have been expected to come down when exposed to high disease pressure.

He said using Revystar at 0.8 litres/ha at T1 and then Univoq at 1.5 litres/ha at T2 gave good control on Saki, but the two sprays are likely to cost just over £100/ha.

Mr Clark has also seen septoria in the variety Graham, without Cougar in its parentage, with a relatively low fungicide dose at T1 and a strong new SDHI-azole mix at T2.

If the Cougar strains become widespread, fungicide timings may have to be changed with more T1.5 sprays used as some strains have a short latent period and normal T2 sprays will be too late, says Mr Clark.