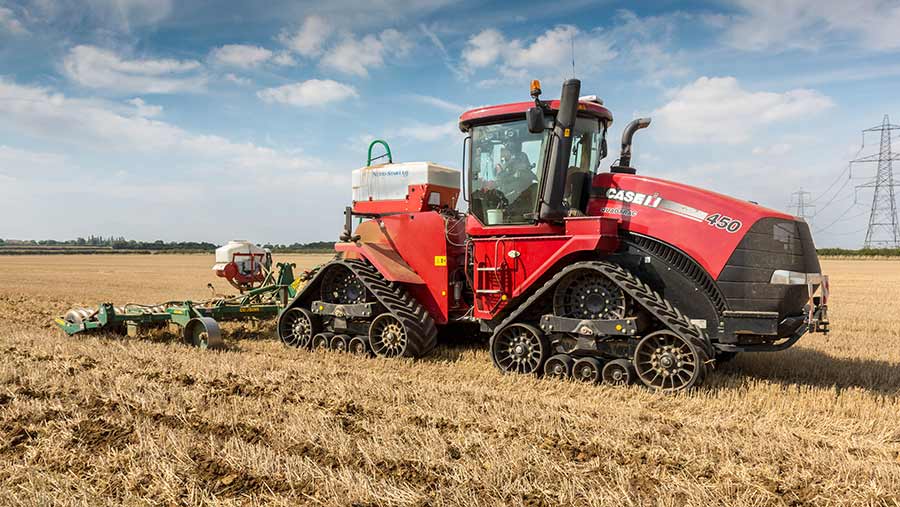 With nine new winter oilseed rape varieties on this year’s AHDB Recommended List, growers have 26 different varieties to choose from when drilling the 2019-20 crop this summer.

Three of the additions were approved for special uses, including one offering a step up in yield (6%) for a clubroot-resistant option, and growers now have a choice of three with turnip yellows virus resistance.

Oilseeds expert Simon Kightley of Niab Tag says the new additions reflect a continuation of the existing story, with conventional and hybrid variety yields alternating on the list and bringing strong performance.

To help farmers decide whether to opt for one of the newcomers or stick with last year’s varieties, he outlines his top picks for this summer.

For the East/West region, Mr Kightley picks out top-placed Aspire, with a gross output of 104%.

A conventional variety from Limagrain, with its UK recommendation Aspire also happens to head the north region with 106%.

“It’s a very attractive variety. As well as being equal top for gross output, it’s short, stiff-stemmed and has a decent disease package. That makes it an ideal variety for those who want a conventional type.”

Aspire is also resistant to turnip yellows virus (TuYV). Given that aphid control appears to have been weakened by the loss of the neonicotinoids, this resistance could become increasingly important, suggests Mr Kightley.

“It was interesting to note that the top of the National List Year 2 trials last year was dominated by TuYV-resistant varieties,” he says.

“There may be more to this story than we first thought and it will be interesting to see if it was just a bad year or if loss of aphid control is behind this.”

He also highlights hybrid Windozz, which has the same gross output of 104% and has given consistently high yields for a few years.

“Windozz is a low-biomass, high-yielding hybrid. Farmers like consistency, and its early autumn vigour is really valued.”

Another on a gross output of 104% is PT275 from Pioneer, now part of Corteva. A hybrid with good lodging resistance and stem stiffness, as well as medium-late maturity, PT275 scores 6 for light leaf spot and 5 for stem canker.

“It’s a good new hybrid introduction, but not outstanding for disease resistance.”

An additional new conventional variety for the East/West region is Ballad from KWS.

“It’s hard to separate this one from Aspire,” he says. “It has excellent yields, but is not quite as good on disease.”

Next comes Elgar on 103%. “This offers consistently high yields from a taller variety, thanks to its good lodging and stem-stiffness scores and combination of light leaf spot and stem canker resistance.”

Elgar is followed by a group of good varieties on 102%, with existing conventional choice Flamingo maintaining its place.

New additions in this group include hybrids DK Expansion and George. Of those, Expansion is conspicuous for its height and offers a 7 for stem canker resistance.

“It’s a very interesting variety,” says Mr Kightley. “It’s tall and has the pod shatter trait that the Dekalb varieties are known for. Time will tell if it gives its best performance on light land.”

George, from Syngenta, stands out for its 8 score for stem canker. Niab fungicide trials have shown small responses for the past three years, but it’s the stem canker-susceptible varieties that give the best responses, Mr Kightley reports.

“For this reason, George gives security – especially where it is difficult to get on with sprays.”

Other varieties in this group include Alizze and Wembley, which are both reliable hybrids delivering consistent yields.

“It’s reassuring to see these two shoulder to shoulder,” says Mr Kightley. “Alizze is recommended for the UK, whereas Wembley is just for the East/West region.”

New choice Temptation from DSV is another with TuYV resistance, just slightly ahead of Architect.

“These hybrids with TuYV resistance are confirming their value and are right up with the best,” he points out. “There’s no yield penalty with this trait, which is good news for growers.”

Clubroot-resistant Crome is a welcome addition, as it has also dealt with the previous yield penalty associated with these types.

“Clubroot land is not uniformly infested, so there is a need for a variety that will do well enough on bad patches and still perform on uninfected land.

“Crome is a decent hybrid on its own, but growers should only use it where it is needed, as there is always the risk of new strains developing. Short rotations should always be avoided on clubroot land.”

Crome has moderate light leaf spot resistance, but is susceptible to stem canker. “Of course, that’s not the burning issue if you have clubroot.”

There is also a pack of varieties with familiar names that are all maintaining good performance, including Campus, Nikita and V316OL.

Mr Kightley’s final selection is newcomer PT279CL, the highest-yielding Clearfield variety to have come through the Recommended List system.

On a gross output of 96%, there is a yield deficit, but new pressures on oilseed rape mean it could have a place, along with other Clearfield offerings.

“The erucic acid contamination issue means if you have a volunteer problem, you are putting your crop at risk.

“Growing a Clearfield variety allows you to take out the non-Clearfield volunteers and deal with any brassica weed threat. Species like charlock have a high erucic acid content.”

With one notable exception, variety rankings for the North region are quite different to the East/West list.

“It’s 7 for light leaf spot resistance is good and it’s short, with good standing ability,” he points out.

Another conventional, British-bred Elevation from Mike Pickford, is next on 104%. It combines a very high gross output with good light leaf spot resistance, putting it right in contention.

New hybrid DK Exsteel is also on 104%, bringing good standing ability and a very good disease-resistance package. “It’s fairly tall and has a 7 for light leaf spot and an 8 for stem canker.”

Clubroot-resistant Crome has a higher yield potential in the North at 103%, which is encouraging for an area of the country where the disease is more prevalent.

“Providing this variety is looked after, it will do an important job. Lengthening the rotation and paying attention to liming should be done in conjunction with variety choice.”

DK Expansion and Ballad are next on the list – with DK Expansion being a tall variety, while Ballad is short and stiff.

“Then there is a bunch of excellent conventional varieties that are all good choices, even if it’s hard to pull out any special characteristics.”

The only Clearfield variety, PT279CL, shows more of a yield deficit in the North. 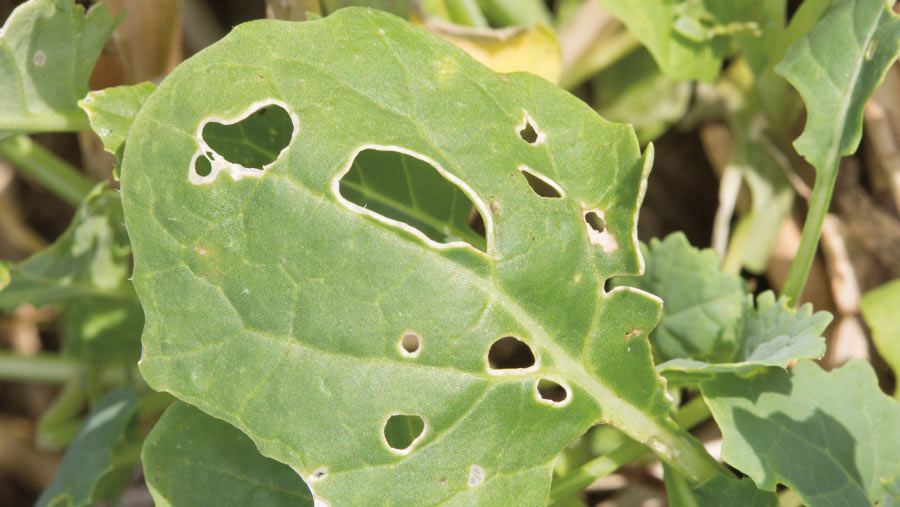 “The first and second weeks of August are the best – the flea beetle threat builds up progressively after that.”

There is some evidence that delaying sowing can reduce larvae numbers, he admits.

“The first objective should be to get a crop, the second is to worry about larvae. At present, we don’t know enough about predicting their numbers.”

There are two approaches to drilling – either using a high seed rate of cheaper, conventional seed or exploiting hybrid vigour with more precision.

As far as companion cropping is concerned, the only species with encouraging results against flea beetle is white mustard, he says.

“It germinates more quickly, attracting the beetles. The rape comes through later and, with luck, gets a clear run.”

The downside is that mustard can swamp rape and needs to be taken out at the appropriate time.

“You need to use 120 seeds/sq m for the white mustard to do the job properly and you can’t wait until the first frosts to kill it. Astrokerb [aminopyralid + propyzamide] will do that job.”

Another option is Clearfield rape, so that use of either Cleranda (imazamox + metazachlor) or Cleravo (imazamox + quinmerac) at the grower’s timing takes out the mustard.

“It seems as though egg laying and larvae activity in mustard doesn’t then migrate into the following oilseed rape crop.”

Varieties with early autumn vigour may also have an advantage in helping the crop grow away from the pest (see graph), he believes.

“In our work, we’re now seeing a consistent pattern of hybrids having generally better early vigour.”