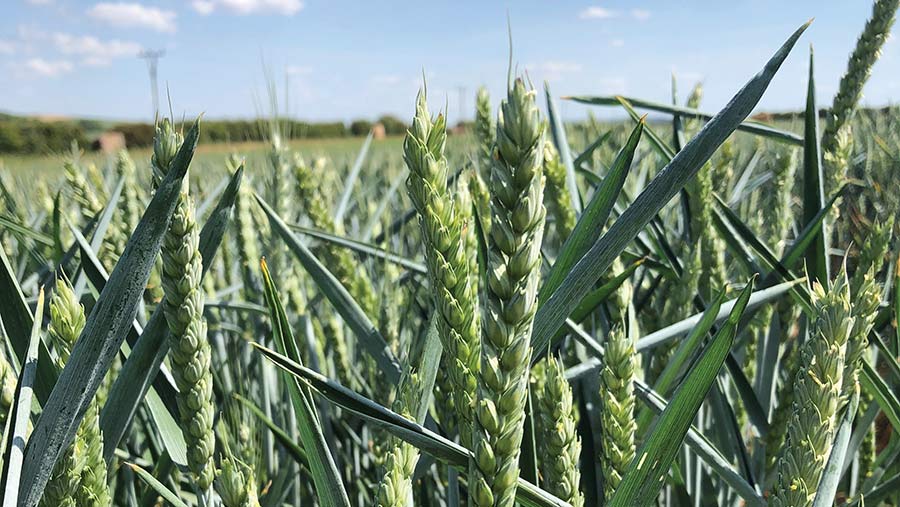 Season-long protection against barley yellow dwarf virus (BYDV) without the use of insecticides is set to become a reality through genetics, as the first winter wheat variety containing the Bdv2 resistance gene nears the market.

Claimed to be a breakthrough in variety development, Wolverine from RAGT is up for recommendation later this year and looks to be holding its own as a feed wheat, with strong yield performance and good agronomic characteristics complementing its BYDV resistance.

A hard Group 4 type, its introduction is expected to be well received by cereal growers as they prepare for another autumn drilling campaign without the benefit of Deter seed treatments.

The only alternative control, pyrethroid sprays timed to coincide with aphid migration into crops, are increasingly becoming less effective against aphid vectors.

As Tom Dummett of RAGT explains, Wolverine is the first variety from the company to offer the BYDV resistance trait, but there are several other wheat lines being developed which will also have the genetic alternative to chemical control.

“It’s an exciting time and this is just the beginning,” he says. “As well as Wolverine, we have four other lines with Bdv2. The effectiveness of the trait has been demonstrated in both the laboratory and the field, so we know that the resistance is to the virus rather than the aphids.”

Mr Dummett adds that candidate Wolverine has shown to be high-yielding in both company and independent trials over the past two years, even in the absence of BYDV.

“There’s no trade-off between the trait and yield, so there won’t be a penalty associated with growing it in a year where aphid and virus pressure is low.

“In fact, Wolverine’s yield potential and agronomic package is just as strong as other feed wheats, so we don’t envisage that it will need earmarking as a niche or specialist variety.”

Should it achieve recommendation, AHDB is still to decide how BYDV resistance will be represented on the Recommended List. Currently, Wolverine is on the candidate list with a yield of 102%, a yellow rust rating of 7 and a septoria score of 7.

In this year’s trials, RAGT is looking at the value of this genetic resistance at different sowing dates and whether the use of one insecticide spray might help to either protect the gene or give a yield uplift.

Three sowing dates – early (beginning September), traditional (beginning October) and late (early November) – are being compared, with all of the plots inoculated with aphids infected with PAV, the most common strain of the virus.

To date, BYDV symptoms have been seen in other popular wheat varieties, with greater expression of symptoms where the virus has had longer to take hold. 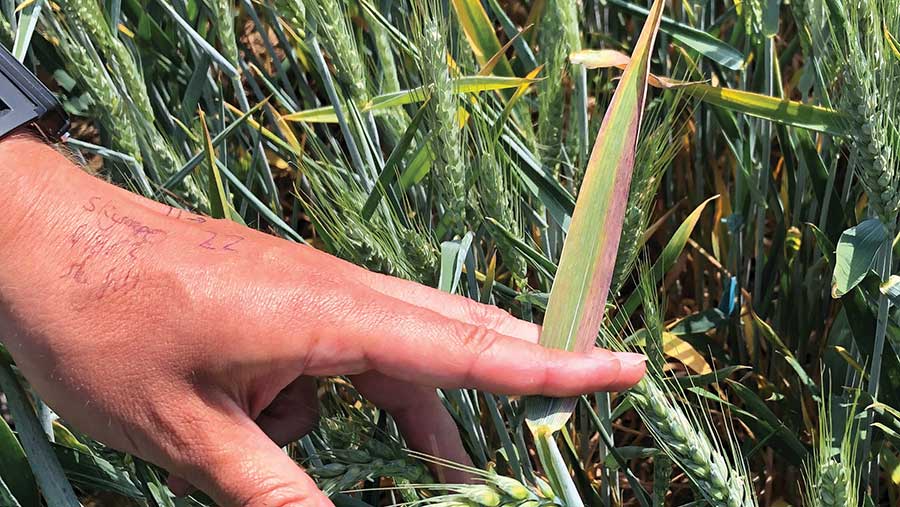 BYDV in one of the trial plots © Louise Impey

“As we would expect, the earlier drilled plots have more virus, but it can still be found in some of the later drillings too,” Mr Dummett says.

“Wolverine, being grown alongside these infected varieties, has remained clean.”

Some varietal differences in terms of the severity of infection have been observed among the susceptible types, but Mr Dummett is reluctant to draw any conclusions until yields have been recorded.

“It may be more to do with time of infection and rate of spread than individual varietal susceptibility,” he says. “Time will tell.”

The use of one insecticide spray has reduced infection symptoms, as expected, by timing it to coincide with secondary aphid migration and so limit virus spread.

Other observations are that the BYDV-resistant varieties are slightly slower to develop, in both the autumn and the early spring, and that BYDV infections in susceptible varieties often result in pinched grains and lower specific weights.

Bdv2 is a known described resistance gene, explains RAGT wheat breeder David Schafer, who stresses that the resistance offered is not quite the same as immunity.

From a scientific perspective, it offers impedance of viral replication, which is what RAGT’s work with it has confirmed.

“In the field, resistance offers reduced symptoms on-farm, as is the case where Wolverine is grown. The resistance appears to be stable and persistent,” he says.

RAGT is the only UK plant breeder with Bdv2, which originated in a goat grass and was translocated on to a wheat chromosome by Australian researchers, who went on to breed BYDV-resistant wheats. 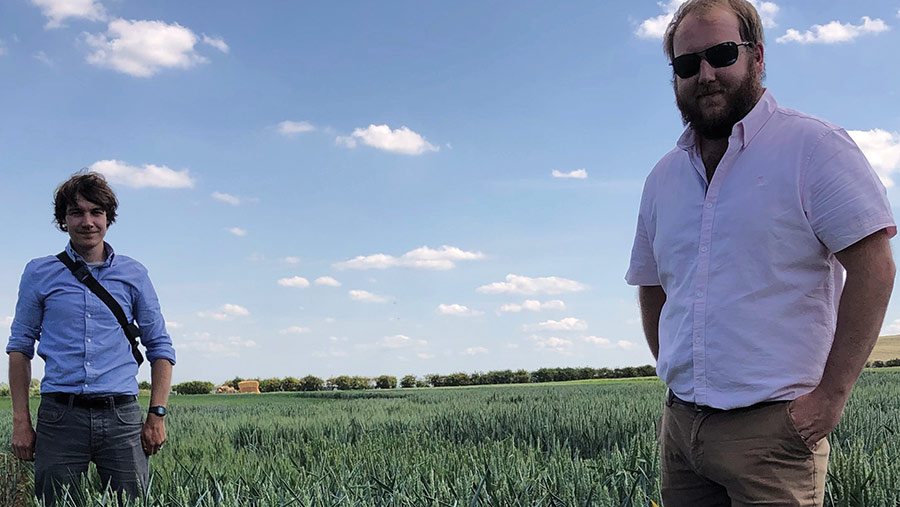 The resulting two Australian varieties, Mackellar (introduced in 2003) and Manning, have maintained higher yields than susceptible varieties when virus pressure is high – even after 16 years.

That experience gave the RAGT team the confidence to introduce it to the European market, says Dr Schafer.

“We have it in the UK and also in our French wheat breeding programme,” he reports.

Elsewhere, there is one BYDV-resistant variety in the United States and there are variety development plans in place in New Zealand.

“BYDV consists of more than one virus strain, so we have done work to show that the resistance is broad-spectrum and effective against the PAV, MAV and RPV strains.” he says.

Other sources of resistance are always being looked at and the potential to stack traits with this type of resistance gene is enormous, he adds.

“Having both orange wheat blossom midge and BYDV resistance in a variety is an obvious goal.”

The previous cost of using Deter (clothianidin) seed treatments and an insecticide for BYDV control has been factored into the cost of growing Wolverine.

The variety will be sold via the BIPO system, which means the value of the trait will be charged directly to farmers on an area basis rather than by tonnage.

That charge will be £33/ha, reports Tom Dummett, who points out that it covers season-long protection and eliminates the need to monitor aphid populations or repeatedly spray at a busy time of year.

For most growers, growing Wolverine will be cheaper than spraying three/four times or using the previous combined seed treatment and spraying approach, he stresses.

A new early maturing six-row winter barley variety with high levels of tolerance to BYDV and resistance to mosaic viruses is being launched by DSV this summer.

Sensation joins two existing six-rows – Rafaela from Limagrain and Amistar from KWS – both of which also offer BYDV tolerance and are already being marketed in the UK.

Where they differ is that Sensation combines the BYDV tolerance with resistance to both barley yellow mosaic virus strains 1 and 2, which are soil-borne, and can cause significant yield losses of up to 40%.

Although the DSV variety is only just starting its journey through the official UK testing system, it will be sold in limited amounts for drilling this autumn after performing well in European trials, confirms Sarah Hawthorne of DSV UK.

“We believe Sensation is the world’s first winter barley combining BYDV tolerance with resistance to both strains of barley yellow mosaic virus, so it’s a real plant breeding achievement and will be a significant benefit to growers.”

Barley yellow mosaic virus resistance to strain 1 is standard in UK barley varieties, but not to strain 2, she adds. “There are no alternatives when it comes to control.”

In France, it has achieved yields of 107.4% and a grain specific weight of 67kg/hl, while also being five days earlier to mature than other barley varieties.