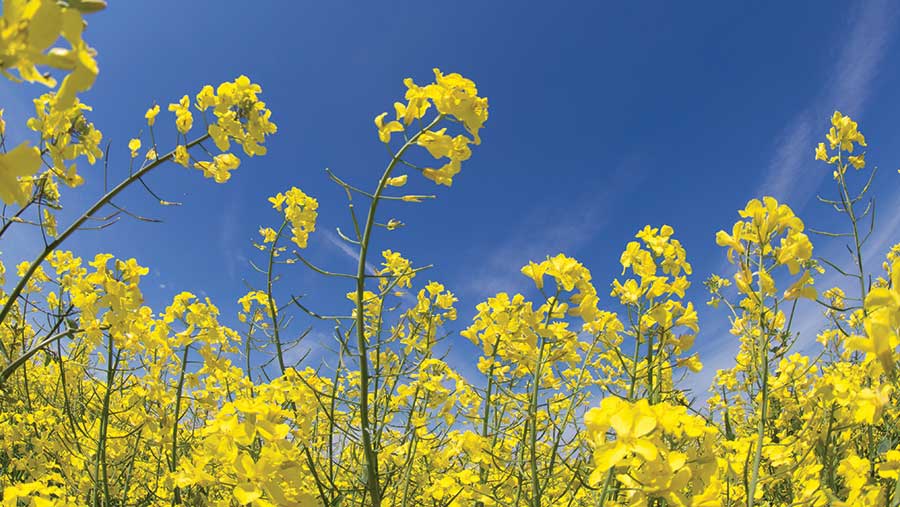 Growers are being urged to reconsider oilseed rape in their spring cropping mix, with newer varieties offering a step up in yield and increased vigour.

With the challenging autumn conditions, many arable growers are now considering their drilling options for next spring, to fill the gap left by unplanted winter crops. One breeder believes spring oilseed rape provides a real opportunity.

“The occurrence of fungal diseases is much less in spring rapeseed than winter rapeseed, so disease control is rarely necessary,” he says.

Phoma risk is not a problem, as the spring crop has a short vegetative period and specific temperature requirements are not met, as the crop only takes about 150 days to grow.

Modern hybrid varieties such as Lagonda and Lumen have greatly improved the establishment and economics of growing spring oilseed rape.

Lagonda marks a particular step forward, with a yield of 112% of control, an oil content of 44.2% and excellent spring vigour, allowing it to quickly grow away from pest attack.

Another strong contender is Lumen, which sits at 105% of control, with an oil content of 44.7%.

Drilling should take place at the end of March/early April at a rate of 70 seeds/sq m, with the aim of achieving a plant population of about 55-65 plants/sq m.

However, growers should be prepared to increase this on questionable seed-beds and heavy or light ground, says Mr Farr.

Growers should try to resist the temptation to drill too early, as temperature and day length will act against the newly sown seedlings, with slowly emerging plants unable to outcompete weed and pest infestations, he adds.

The crop will be ready when 90% of the seed in the mid-third of pods on the main stem are a red to dark brown in colour. The temptation to desiccate or swath early should be avoided, otherwise oil content will be jeopardised.