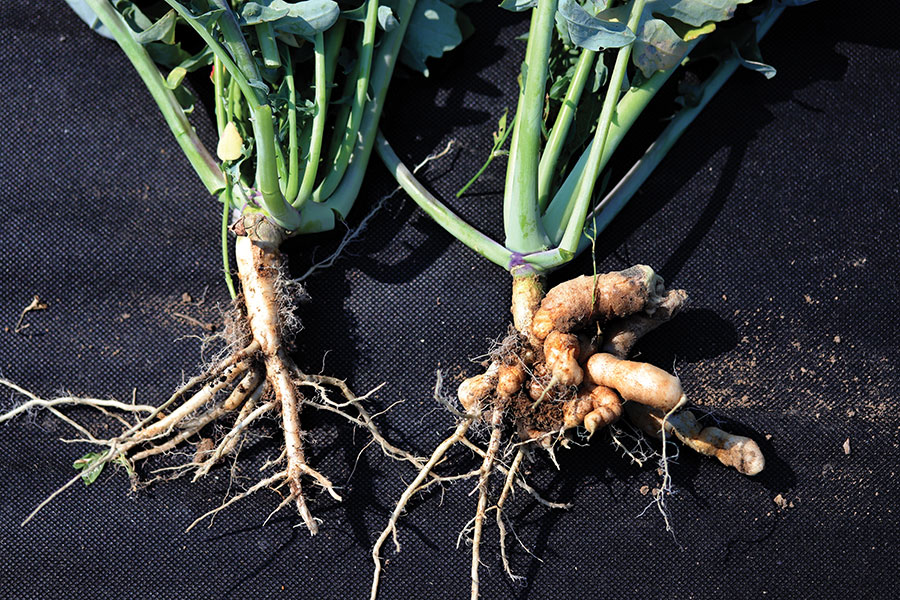 Clubroot-resistant OSR varieties are a valuable tool for keeping the crop in the rotation, but growers should also deploy other measures such as liming affected fields.

That’s because an over-reliance on varieties can eventually lead to resistance breaking down, leaving farmers with areas where they can no longer grow the crop.

Oilseed rape breeding has seen big advances in recent years, and clubroot resistance is no exception. Growers now have a choice of three varieties on the AHDB Recommended List, and the yield gap with standard varieties has narrowed.

See also: Could companion cropping be the key to successful OSR crops?

So how should growers use resistant varieties as part of their clubroot strategy? Michael Farr, technical manager at breeder DSV, which bred the clubroot-resistant variety Crocodile, says while they are a key part of the solution, growers should also look at other controls. “It needs to be part of a package.”

The first factor is soil pH. “Growers need to see if they can raise it to pH 7 or above, as you start to see less symptoms.”

The AHDB also advises the use of lime, which results in a spike in pH and available calcium at drilling. “High doses of lime [applied at 8 t/ha] can reduce clubroot severity by 25%.”

The next factor is rotation. As the spores can survive in soil for 10-20 years, dropping brassicas for that time is not practical, so growers will need to look at growing a resistant variety and extend the rotation.

“Rotation is the key weapon and growers should look to increase it by at least two years,” Mr Farr says.

This will help reduce resistance pressure. “We know the Mendel gene will break down over time, as the disease continually mutates, so you need to look to increase the gap [between OSR crops] and preserve the gene as long as possible.”

But it’s not just oilseed rape; growers need to look at the total brassica burden in the rotation, including weeds and other crops.

Weeds such as runch and charlock need to be managed to prevent them acting as hosts in the years between oilseed rape.

Some farmers will also need to question whether they have to grow forage brassicas.

Also don’t forget cover crops. “While fodder radish is tolerant to clubroot, it still hosts the problem and bridging it over,” Mr Farr says.

Another tip is to follow good machinery hygiene when moving from field to field. The disease can be carried in soil lodged in crevices on cultivators.

This is especially important where there are patches that have overcome varietal resistance, as growers don’t want to spread it to other fields.

“It’s like blackgrass – machinery can inadvertently spread the problem, and it is good practice to clean down before moving to the next field,” he says.

While it is an inconvenience, it will help avoid a load more problems in the future.

David Waite, Frontier regional seeds manager, also points to storing infected vegetables, such as swedes, on land or the dumping of vegetable waste.

Clubroot can even be spread from the manure of animals fed on infected produce, he warns.

“That’s probably why the north of Scotland suffers so much, as such a large proportion of farms are mixed, with a significant area of swedes and turnips grown to feed stock.

Clubroot is becoming more prevalent across the UK, possibly the result of closer rotations seen in the past 10-15 years.

DSV’s Michael Farr points out that it is not entirely a northern problem, although the disease is historically associated with Scotland and northern England. It’s also being increasingly seen further south on low-pH soils, with pH6.5 and below.

“Even in Hampshire and down into Wiltshire and Dorset, where we have these soil conditions, we are starting to see affected spots in fields for the first time.”

He adds that it is also a growing problem in the wetter West, such as Herefordshire, where forage crops are grown, as they act like a bridge crop in the rotation.

Mr Farr believes it is the result of rotations becoming tighter over the past 10-15 years. “Wet conditions in August and September also ramp it up.”

Identification is relatively easy. Growers will start to see the odd affected plant in a field, and symptoms are obvious.

“Plants will appear stunted and when you pull them up to investigate, you will see the characteristic swollen roots,” he says.