High-protein German wheats are now part of Essex farm manager Mark Tubby’s rotation as they have increased his profits and given him an extra tool to fight blackgrass.

The wheat variety he chose costs him the same to grow as his standard milling wheats while winning him an extra £25/t price premium and the satisfaction of knowing he is filling a need in the market.

He has chosen the German elite or E wheat variety Montana, which actually outyielded his standard breadmakers, and with no extra growing costs and a healthy price premium he made an extra £275/ha in gross margin.

“There is a need for this high-protein wheat and there is a gap in the market for us to try to fill this demand,” he tells Farmers Weekly. 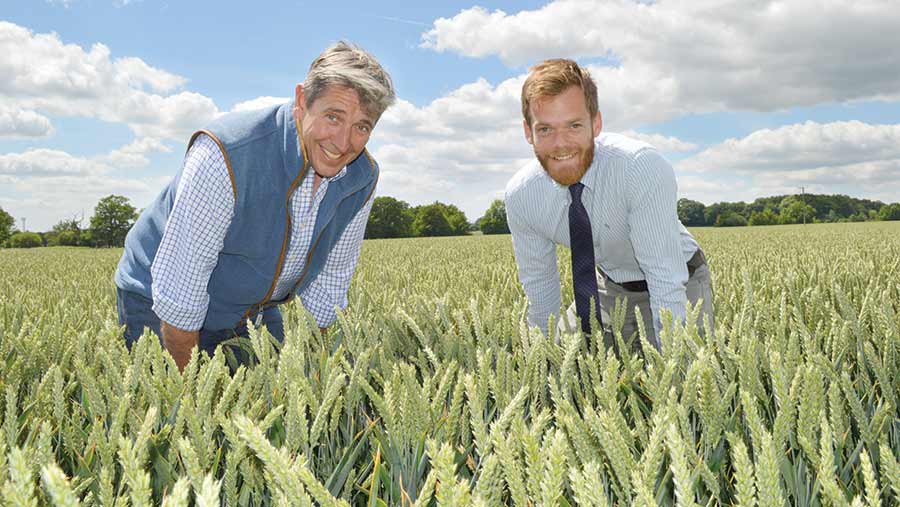 This season, 150 growers largely in East Anglia, are growing a significantly increased area of Montana under contract to ADM Direct for flour miller ADM aiming to produce 14.5% protein wheat to replace imports from Germany.

A generation ago, German wheats grown in the UK had a reputation for two things – falling over and attracting disease – but this KWS-bred variety appears to show a big improvement with the careful use of nitrogen fertiliser and a straw-shortening programme.

Mr Tubby, farming in south Essex close to the M25 for S&J Padfield, chose a 100ha block of land to grow first wheats split between Montana and, the most popular breadmaking variety, Skyfall. Both had identical inputs for harvest 2017.

On good heavy London clay wheat land the Skyfall yielded 9.5t/ha while the Montana registered 9.7t/ha, with the German wheat protein being 2% ahead at 14.6% to 15.0% compared with Skyfall at 12.7%. 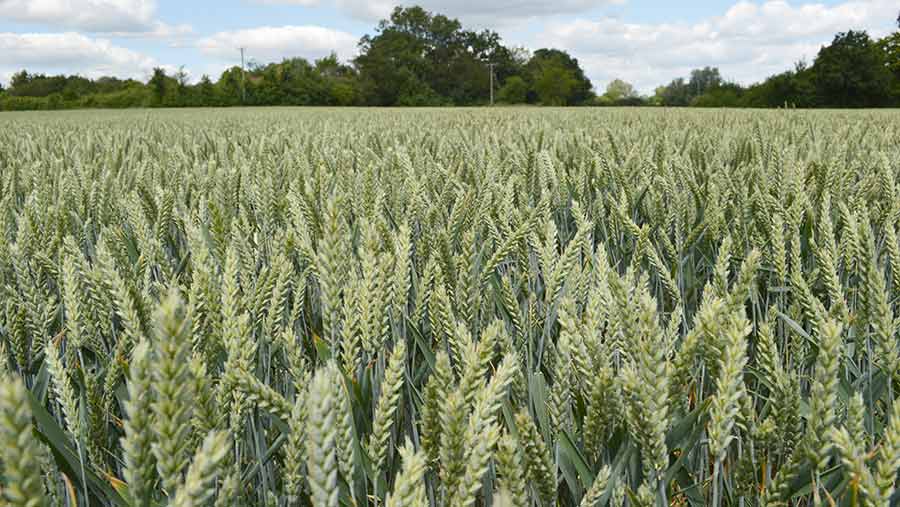 “We were very happy with the yield and the quality as it all hit full specification, and so this season we have doubled the area,” he says.

All the 100ha of land in Montana and Skyfall last year was drilled as a second wheat with Montana this year, and he says the variety has stood up well after the late and wet spring.

As a tall variety with only medium strength straw, he emphasised that careful timing of nitrogen fertiliser and a robust plant growth regulator (PGR) programme is key to keeping the crop short.

The variety has fitted in well with the farm’s fight against blackgrass as it is well suited to late drilling and produces very vigorous growth in the spring.

The rotation on the 1,000ha of all arable land  at Codham Hall Farm just south of Brentwood, has been adjusted to add more spring-sown crops such as spring beans and spring barley alongside winter wheat and oilseed rape to give more time to control blackgrass.

The late-drilled Montana fits in well with a blackgrass strategy to allow plenty of time to control grassweeds in the autumn as the variety was drilled on 20-22 October in 2016.

The seed rate was relatively high at 180kg/ha to compensate for its slightly shy tillering habit to put down 350 seeds/sq m with an aim for 550 ears/sq m at harvest.

Spring nitrogen was applied in a three-way split totalling 200kg/ha plus a further 35kg/ha liquid nitrogen on the wheat ear to give a total of 235kg/ha.

The focus was very much on keeping the crop standing and a growth regulator mix of chlormequat (1litre/ha) and Moddus (0.2litre/ha) was used at the T0 stage, and then again at the T1 timing.

Through to harvest 2017 and the Montana and Skyfall ripened at the same time, but testing in the field showed Hagberg levels in the Skyfall were falling more quickly than the Montana, so the harvest team had to cut the Skyfall first.

Both ended up over the breadmakers’ standard of 250 Hagberg, while the Montana outpaced the Skyfall on specific weight at 81kg/hl compared with 78-79kg/hl.

For this season, the seed rate was edged up to 220kg/ha due to a poorer quality seed-bed and then drilled on 13-15 October.

Nitrogen levels were edged up to 230kg/ha as it was a second wheat with a four-way split used rather than a three-way one the previous year, and then adding 35kg/ha as a liquid application on the ear.

The crop had shown some signs of going down in areas of overlapping nitrogen or drilling last year, and so the PGR programme was tweaked up with a similar T0 treatment, while the T1 was chlormequat plus 0.6 litres/ha of Canopy.

The fungicide programme was similar to the previous year with a four-spray programme used incorporating two SDHIs, with Mr Chapman emphasising that rust is just as big a threat as septoria in this dry growing area.

He used the SDHI solatenol at T2 due to the fungicide’s persistence against septoria and rust, and for this season he added extra metconazole in the azole mix at T3 to counter the fusarium threat.

“For a second wheat, it is not looking too bad, and we are pleased with the crop so far,” he says.

So for next season, Mr Tubby is looking to increase his area of Montana as long as it performs well this year at harvest.

Growing wheat with a market in mind 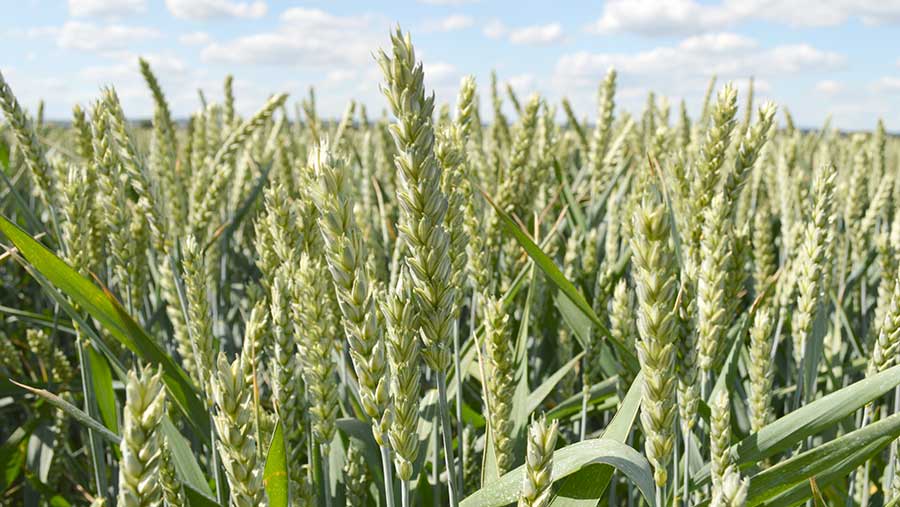 Ed Ford likes to grow wheat where he know where the grain is heading. So he tried the variety Montana last season when a 4ha block yielded 8t/ha at 14.4% protein, and for this season he is growing 50ha and he will be looking to increase the area this coming autumn.

It is outperforming his Crusoe wheat which is suffering from brown rust this summer, and an expansion of Montana is likely to come at the expense of this old favourite. 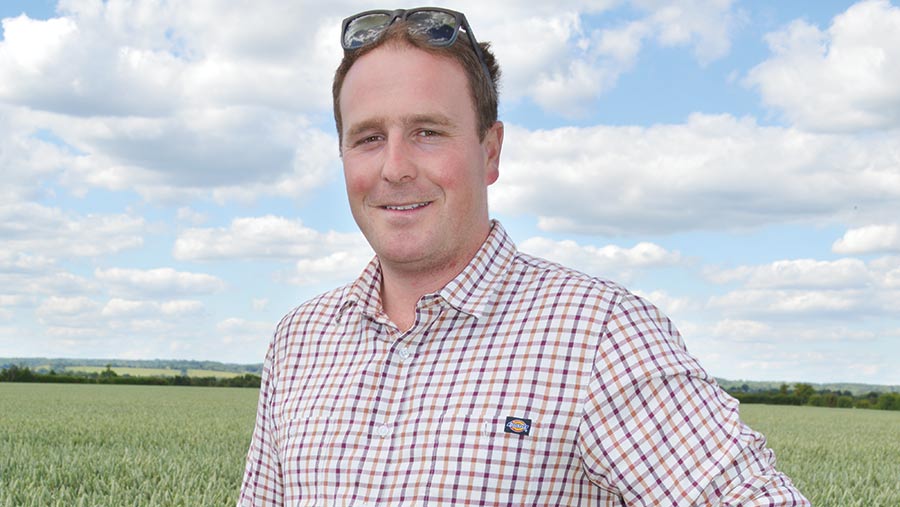 Mr Ford adds it is important he knows where his wheat is destined and, on good heavy wheat land, he is impressed with the Montana achieving 14.4% protein, which outperformed his Crusoe at 13-13.5%.

The variety is again very useful in combating blackgrass as it can be late drilled and shows good spring growth to suppress the troublesome grassweed.

His nitrogen programme is similar to that used on Crusoe with three splits in the spring and one liquid ear spray, giving a total of 280kg/ha, while his PGR programme includes 1 litre/ha of chlormequat and 0.1litre/ha of Moddus at T0 and again at T1. He also used Terpal at the T2 stage, and has not seen the crop go down.

“With our wide rows which lets more sun into the crop we are keen to keep the wheat as clean as possible,” he says.

Yields of Montana are down this summer, but in line with the lower wheat yields seen across the rest of the farm, says Mr Ford.

With about three-quarters of his Montana cut, yields are about 7.3t/ha, down on the year but in line with what he is seeing with other milling varieties, such as Skyfall and Crusoe.

“Yields are down this year, but that is the same with all other wheats, and the Montana gave a lot of straw which is valuable in a year like this,” he says.

The market for Montana

There are 150 farmers growing Montana this season under contract for miller ADM. Premium prices are paid for grain proteins over 13.5% on a sliding scale up to a maximum of £25/t over standard Group 1 breadmaking prices.

The high-protein flour is needed to produce a range of specific flours for ADM’s diverse customer base.

ADM Milling’s Mark Ringrose says: “We are very optimistic the contract for harvest 19 Montana will be similar to the current contract. However, this will not be finalised until we have evaluated, [milled and baked], samples from the 2018 crop, at this point contracts will be exclusively offered by ADM Direct through our ‘field to flour’ initiative.”