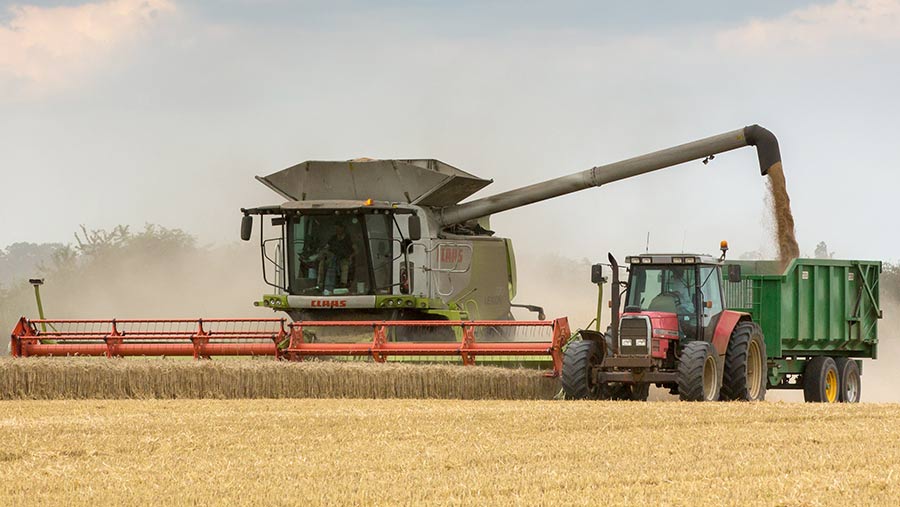 Britain’s biggest flour miller, Whitworths, is urging wheat growers to produce very high quality grain which could replace imports and help shield them from the uncertainties of Brexit.

The privately-owned group is looking to substitute German and Canadian imports, and so reduce the 500,000t annual need for very high specification wheat to make wholemeal loaves and bagels.

New bakeries currently being  built in the UK are looking for 14%-plus protein wheat, so the miller is appealing to growers to try to meet home needs rather than growing a mountain of feed wheat for export.

Raich Growdridge, purchasing director at Whitworth Brothers, warns that wheat imports from the European Union may become more expensive after Brexit, so there is a clear opportunity for UK growers.

“We would love this wheat to be grown in the UK. If we ever see 14% domestic wheat it does not show good functional protein,” he says.

The company has linked up with independent plant breeder Bill Angus, grain trading giant Glencore and agronomy group Agrii to look at a Hungarian wheat variety to try to meet this need.

Mr Angus, who selected the variety for the UK market, sees it as a wheat for East Anglia, the bread basket of the UK, with its high sunshine levels and dry climate, but it also could be grown south of a line between the River Humber and River Avon at Bristol.

Four farmers are currently growing the variety, named Mv Fredericia, with an enlarged group of growers set to drill 1,000ha this autumn, and then the seed will be more widely available next year.

Whitworths, which mills 1.3m tonnes of wheat annually at its 13 mills – including Whitworth Brothers and Carr’s Flour Mills – has seen little of the variety, but Mr Growdridge says it shows definite promise to fill the industry’s need for top quality wheat.

“We have seen limited quantities of the variety so far, but it has baked at least as well as German wheats,” he says.

Mr Growdridge adds that the arrival of Aldi and Lidl supermarkets has shaken up the UK baking sector, with bakery groups that supply the two retailers from continental Europe moving to Britain. The firms are currently building two new plants and have 3-4 more in the pipeline.

Mr Angus’s Hungarian variety may not hit this top quality, but the key will be protein functionality and how it bakes, and so help replace some of the German and Canadian imports which are priced at about £10-30/t over standard UK milling wheats.

Qualities Whitworths is looking for in milling wheats

James Maw, managing director of Glencore Agriculture UK, also urges growers to focus on quality wheats rather than feed wheat, as he does not see a big future for exports of these feed grains.

“Growing this type of quality wheat gives more growers more opportunities as they are closer to the end user than those in the middle of Germany or the Canadian prairies,” he says.

Currently, German elite or E wheats come into the UK tariff-free, while Canadian hard red spring wheat also comes into UK tariff-free if over 15.2% protein, or with a €90/t tariff if under this level.

After Britain leaves the EU next year, it is unclear what, if any tariff, will apply to UK imports from EU nations like Germany and to non-EU nations like Canada.

With Britain importing about 22% of its annual milling wheat need, or 800,000-900,000t out of the total requirement of 3.7m tonnes, Mr Maw says farmers need to be focused on growing wheats that the market needs.

Growing this type of wheat will help growers manage the risks from Brexit and also reduce the carbon footprint of wheat production, adds Mr Maw.

The tie-up between Glencore and Agrii could be similar to that suppling spring malting barley of the variety Explorer at a higher nitrogen content than traditional to brew Budweiser beer, which currently amounts to 75,000t per year.

Mr Angus and Agrii will be working out an agronomy package to manage the variety to yield a modest 8-9t/ha and get it close to the high milling specification.

The variety is ideally late sown at the end of October, is early to harvest in late July and is probably 5% lower yielding than milling mainstay variety Skyfall.

“Early maturity will always lead to lower yields, you can not compare Usain Bolt with Mo Farah,” he adds.

Although some German wheats grown in the UK have been weak-strawed and susceptible to UK-specific diseases such as septoria and yellow rust, this awned Hungarian variety is showing generally good disease resistance as it was bred in a country with low fungicide use, says Mr Angus.

He suggests growers should monitor the variety for mildew, and fast-developing brown rust late in the season, while lodging could be an issue in thick crops. It has a good septoria resistance and a specific weight to match top-performer Costello.

The variety is in national list trials but will not go into recommended list trials, as Mr Angus argues it will not fit well into these trials as it is very early maturing at -4, compared to traditional early variety Cordiale at -2 and old favourite Diego at 0.

Another big flour miller, ADM, is encouraging farmers to grow the German E wheat variety Montana bred by KWS with a target to produce 14% protein wheat.

All varieties from the Hungarian breeder Martonvaras are prefixed with Mv, while Federicia was the name of the first pirate radio ship transmitting Radio Caroline in the 1960s, which shattered the BBC radio monopoly and changed the world of radio.

Steve Corbett, senior agronomist at Agrii, says 23.3% of certified winter wheat seed currently in the ground is of Group 1 milling varieties, nearly double that of four years ago. But this has not particularly helped the millers as much of it does not reach milling standards.

Top varieties being grown currently are Skyfall, Siskin, Graham, Crusoe, Costello and Kerrin, with Skyfall and Crusoe being Group 1 milling varieties and another miller Zyatt is seventh.

In Agrii trials, the Hungarian variety along with old milling favourite Soissons and Crusoe gave the best protein levels, while it performed best for yield and grain protein at a relatively modest nitrogen level of 200-250kg/ha.

In competition against blackgrass, it came top alongside Bennington, emphasising its usefulness in combating the grassweed.

“The speed of growth in the spring is impressive as it sees strong growth before the blackgrass wakes up,” says Mr Corbett.