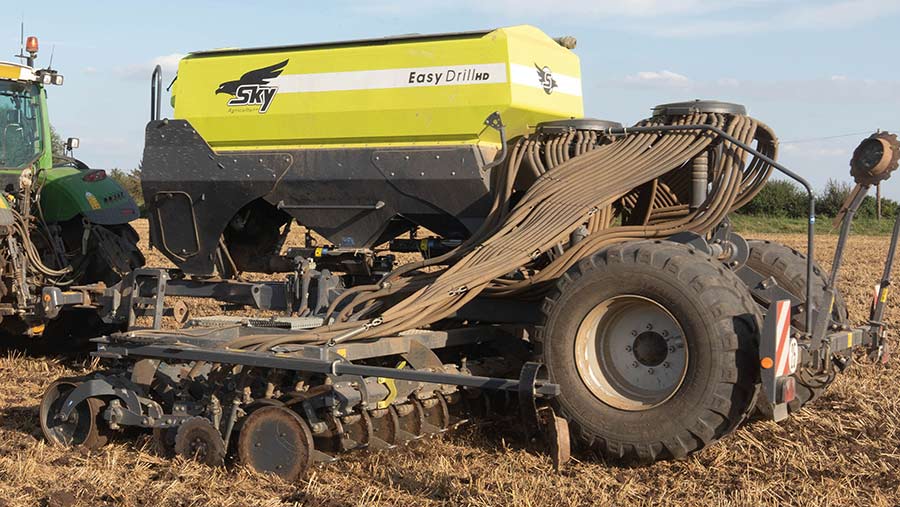 Picking the right oilseed rape variety is critical in minimising the damage from cabbage stem flea beetle in crops, and a breeder has developed new vigour scores to help farmers get it right.

There is a particular focus on getting crops rapidly established and away ahead of the adult flea beetle threat.

Therefore, farmers are increasingly picking varieties based on autumn vigour – a term that is being used more and more by the trade. So what is vigour?

There is no official definition and the AHDB approach on a 1-9 scale is very subjective, says Limagrain arable crops development officer Liam Wilkinson.

It only gives a snapshot in that season and it can differ between the different assessors, so it’s questionable whether you can compare the scores given its subjectivity.

“You also don’t know how the variety got to that end point,” he adds.

To help address this, Limagrain has developed its own ratings, which will be available for the coming season.

“Farmers are looking for good vigour so that crops grow away from damage by adult cabbage stem flea beetle and pigeons,” explains Mr Wilkinson.

The ultimate aim is to be going into the winter with eight leaves, an 8mm collar and a 15cm main root, he says.

At this stage, the plant is better equipped to survive the winter.

But the term vigour can be misleading, with some farmers associating it with biomass.

“Instead, it’s the time taken to get to the overwintering biomass [eight leaves, etc].”

But when selecting which variety for which drilling date, it’s also important to consider how the plant got there.

Mr Wilkinson points to three key timings in the autumn:

Getting to three to four leaves is key to crops surviving adult flea beetle damage.

Spring vigour is different to autumn vigour, as this is the plant’s response in changes to day length and is easier to measure.

Those with strong vigour respond earlier and it is defined as the time to flowering, says Limagrain’s Liam Wilkinson.

Good spring vigour is desirable, as crops can grow away from larval damage by cabbage stem flea beetle.

Aviron tops the spring vigour ratings with an 8 rating.

“Most damage occurs up to this stage, and once you get to three to four leaves, the plant is safe from adult damage.”

Second, getting to the final target is important for winter hardiness and having sufficient biomass to help reduce larval damage. It also helps with weed suppression.

That amount of biomass means the larvae will stay in the leaf petiole and not move to stems, he explains.

“They [larvae] are happy to remain in the leaf before dropping out. The plant can compensate for this.”

However, when there is insufficient biomass, the larvae run out of food and then move to the stem and cause the real damage.

Knowing how varieties get to the two key points are key to picking the varieties that suit a particular system and drilling date.

That’s because some varieties do the first part quickly then slow down growth once they get to three to four leaves or vice versa.

For example, when drilling later, the rapid growth as seen with Aviron is ideal.

This variety has the most rapid autumn growth, with an autumn vigour score of 8.5.

Mr Wilkinson says drilling early with this variety brings the risk of having too much biomass in the autumn and, in some cases, a plant growth regulator will be needed.

Antigua also has good vigour, but this variety will stop growing in the latter part with less risk of having excess biomass.

He also points out that the high autumn vigour of Aviron gives farmers some flexibility.

If drilling conditions are not right, farmers can afford to wait 10 days until it improves, as they know Aviron will get going in the good conditions.

A slower growing variety such as Aspire (score 4.5) would be more suitable for early drilling, like late July, he says.

It is slower to get to the three to four leaf stage so can drill earlier.

However, while still offering vigour, Ambassador has a wider drilling window and can be drilled up to mid/late September.

Limagrain is working with Adas to assess the effect of the N-flex characteristic on crop performance.

A total of 18 tramline trials are being carried out across the UK to see if varieties with the characteristic can perform better in sub-optimal nitrogen situations.

The thinking is that these varieties cope better when fertiliser cannot be applied at the right timings – for example, when fields are waterlogged.

Spreading the first nitrogen split in early spring is all about weather,” says Limagrain’s Liam Wilkinson.

To test this, he is looking at different nitrogen rates, with a 15% reduction to simulate getting the timing wrong and what the impact will be on yield.

Tramline plots will be monitored using satellite and drone data to assess any differences in crop biomass and they will be taken to yield.