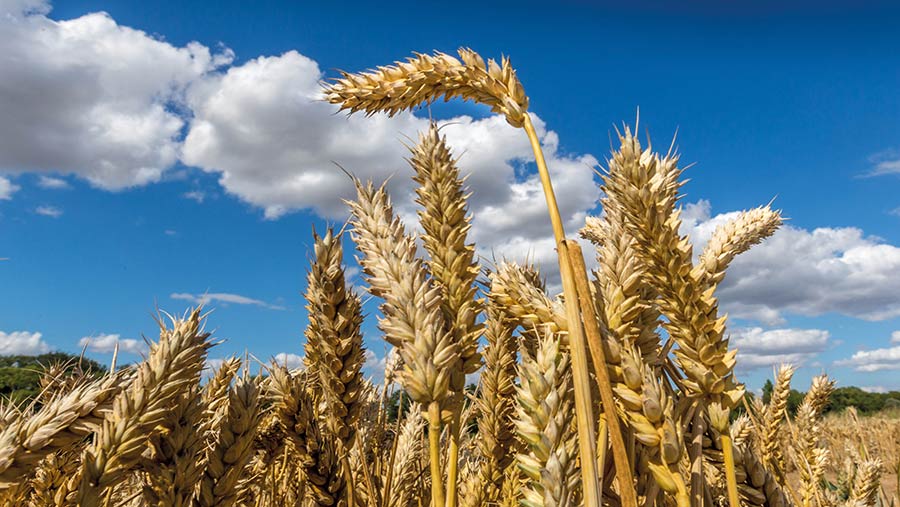 Regenerative farmers could be attracted to a new feed winter wheat variety which is suited to being direct drilled early in the autumn and may offer lower fungicide costs due to its good disease resistance.

Typhoon, from breeder Limagrain, will be available to drill this autumn, with its good tillering ability and early prostrate growth habit being useful in suppressing weeds, which could lead to lower herbicide costs.

Ron Granger, arable technical manager at the group, says the variety has been a consistent performer over three years of official trials across all regions, and could become a good reliable variety, such as old favourites Graham and Diego.

“The variety will suit regenerative farmers looking for good disease resistance and the ability to fill the rows while it has midge resistance,” he told a briefing by the breeder.

This will attract growers looking to direct drill early, help control fungicide and herbicide costs, and there will be no need for a summer insecticide with its orange wheat blossom midge resistance, he added.

Typhoon is the breeder’s first hard-milling feed wheat variety since Evolution to make the AHDB Recommended List, to which it was added at the end of last year along with other high yielders Dawsum and Champion, and there will be enough seed to take a 3% share of the market this autumn.

Its fungicide-treated yield of 102% is behind Dawsum at 104% and top-yielding Champion at 106%, but Mr Granger says the variety ticks a lot of boxes for wheat growers.

“Yield is important, but not that important. What growers want is a robust variety which can offer cost savings,” he says

The variety performs particularly well in early drilling situations where there are low blackgrass numbers, and will suit regenerative growers keen to direct drill on wide rows. It can be drilled from mid-September to mid-February.

The high-tillering variety performs well at low seed rates – advisable for early drillings in September – while its stiff straw is in line with other feed wheats such as Graham and Gleam.

The variety has a good disease resistance profile with a 9 score for yellow rust and a 6.9 one-year rating for septoria in a 1-9 scale, where 1 is susceptible and 9 shows good resistance.

Its good disease resistance package gives it an untreated yield of 89%, ahead of Gleam at 80%, but behind Champion on 90%, Dawsum on 92%, and top performer Extase on 93%.

“Growers want security and its good disease package brings out that security,” he said.

Grain quality is good with a specific weight of 76.3kg/hl, above Champion at 74.8kg/hl, equal to Gleam, but behind Dawsum on 79.4kg/hl.

Its maturity is a little late, at +2 days later than Skyfall, compared with Dawsum at +1, Champion and Gleam in line with Skyfall, and Extase one day earlier.

It also shows a good performance as a second wheat, and Mr Granger believes a lot of second wheats could be drilled this autumn looking at the high price of wheat.

Matt Shand, the group’s national sales manager, says there will be a reasonable amount of seed available this autumn. “It could take up to 3% of  the market next autumn and should be in the top 10 varieties,” he said.