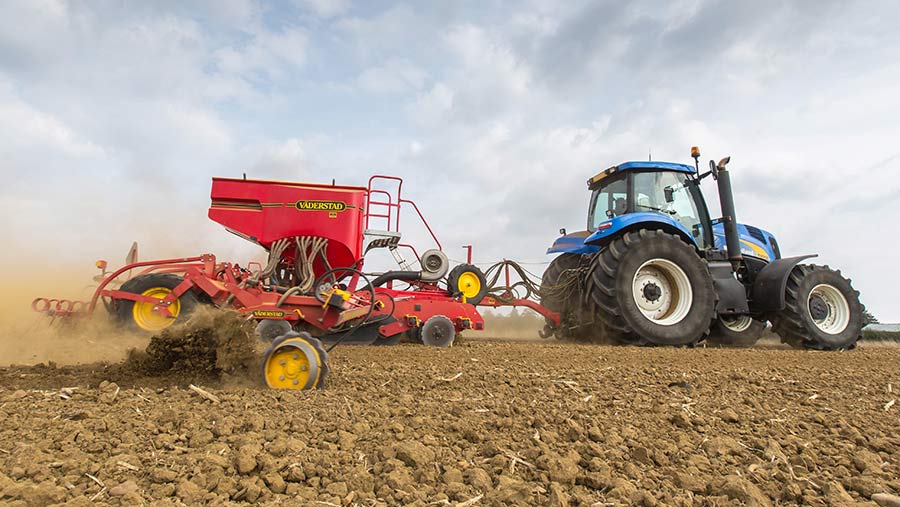 Group 1 and 2 milling wheats account for more than one-third of the total British wheat area, and with two new additions to the Recommended List, growers have nine varieties to choose from.

One of the two newcomers, Extase, has generated excitement because of its good septoria resistance.

On top of this, the Group 3 biscuit area has seen a revival in recent years, with the latest AHDB Planting and Variety Survey showing it now accounts for 11% of the GB wheat area. That’s 99,000ha more than in 2017.

This area could rise further, with the arrival of Firefly, another variety causing a stir. 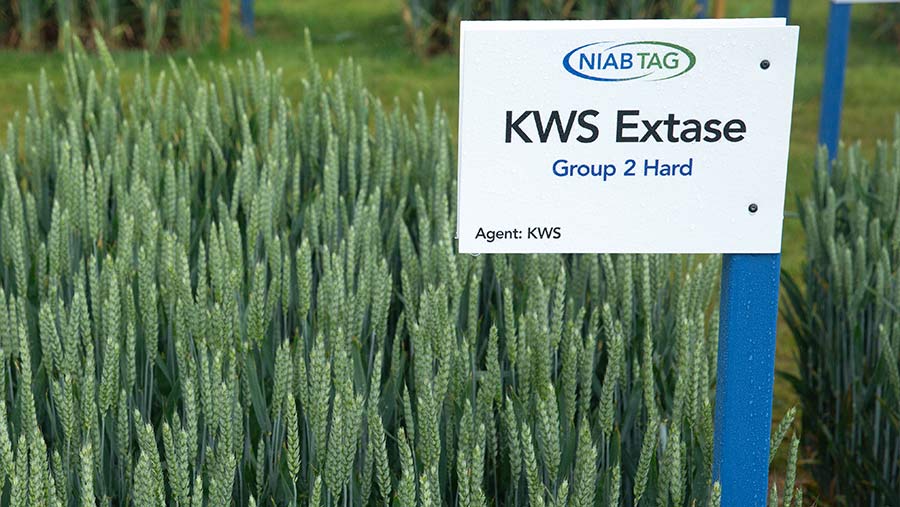 So with 14 recommended Group 1, 2 and 3 varieties, Farmers Weekly asked experts for some pointers.

In the milling sector, Skyfall has been a key variety in recent seasons, and is likely to be popular again this autumn, says Agrii’s national arable seed manager, Barry Barker.

Aside from the potential price premium, the Group 1 variety is very competitive on grassweeds and offers “tremendous flexibility” for drilling date, so may suit those wanting to drill later for blackgrass control, he says.

“It ticks a lot of boxes, but you do need to watch yellow rust with a good T0 and T1 fungicide.”

The latter is competitive against blackgrass and performs reasonably well when sown late, although it is more susceptible to brown rust, he says.

Crusoe is an established milling wheat that, despite being lower-yielding than newer varieties, still performs well on many farms, adds Essex farmer and agronomist Robert Harper, from Harlow Agricultural Merchants.

New to the Group 2 sector, Extase has already attracted interest from millers and is proving very popular with farmers given its high untreated yield (95%) and strong resistance to rust and septoria. However, seed availability is likely to be limited this autumn, he says. 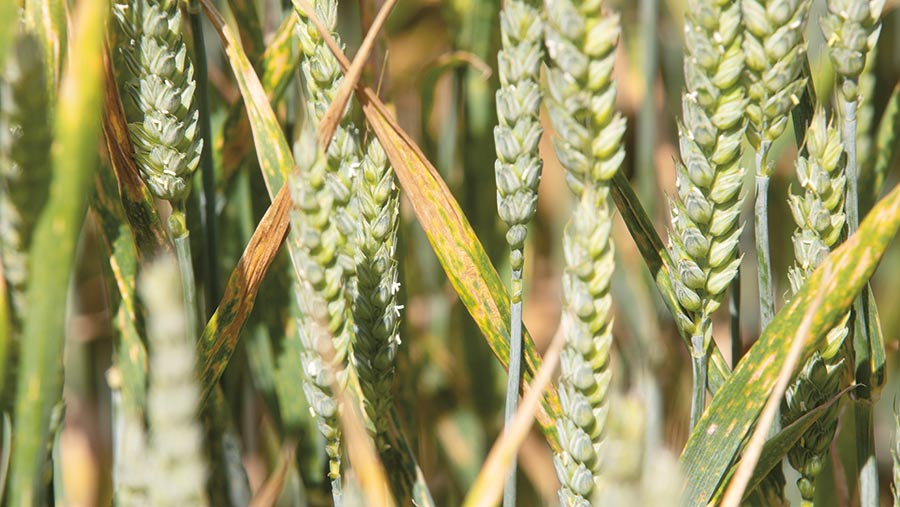 “Although septoria is less of an issue in the east of the country than further west, if we lose chlorothalonil, it could become a bigger threat and farmers will have to focus more on resistance in the plant.”

Of the bread-making wheats, just two – Skyfall and the new Group 2 Detroit – have orange wheat blossom midge resistance, which may be worth considering where there is a past history of midge problems, says Niab Tag cereals specialist Clare Leaman.

“Midge requires specific environmental conditions to be a problem, but with fewer chemical options available, having genetic resistance is a big advantage, particularly with quality milling varieties,” she says.

Among an interesting selection of Group 3 biscuit wheats, Elicit is a favoured option by many, offering better septoria resistance than Barrel (6 versus 4.5).

“Elicit is a solid variety, with reasonable specific weight, decent rust resistance and is still the best for grassweed competitiveness,” Mr Barker says.

“But it’s not the stiffest variety and there is better septoria resistance in newcomer Firefly. Seed may be limited, but Firefly looks very good, although we need to monitor brown rust, which we have seen come in this year.” 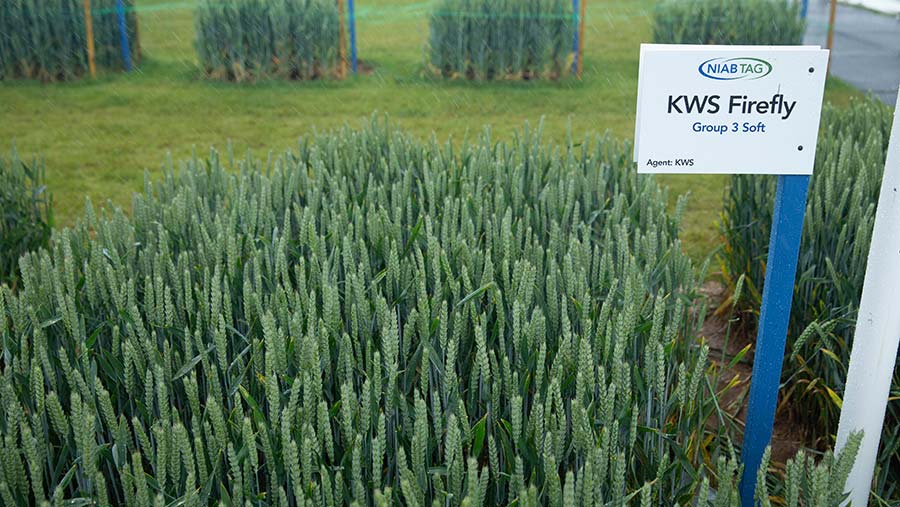 There are alimited number of homes for quality wheat as you head further north, says Chris Guest, head of seed at ADM Agriculture.

For milling wheat growers, Group 1 choices Zyatt and Skyfall sit well together and will dominate the quality market, with Crusoe slipping back a bit, he believes.

Siskin is the only major Group 2 option and will remain popular – with many growing it as a feed wheat.

“There’s no getting away from the excitement that Extase has created, with its very high septoria rating and untreated yield figure,” says Mr Guest.

“However, the seed has all gone and most growers will have to wait until next year to try the variety.”

For biscuit wheat growers, Firefly will be welcome, he stresses. “My view is that Firefly was the best addition to the Recommended List this time.

“It has the whole package – straw strength, midge resistance and market demand, although it isn’t one for growing further north than Yorkshire.”

A possible brown rust susceptibility won’t be the same issue as it could be for growers in the South, he adds.

“Otherwise, there’s Barrel, which yields well in the North, but doesn’t go for distilling and isn’t very good for septoria, or Elicit, which tends to divide opinion.”

Farmers should consider the implications of not being able to spray for 10 days at either the T1 or the T2 fungicide timing before choosing wheat varieties for the south of the country, says one agronomist.

Jock Willmott of Strutt and Parker says consistent performance from varieties in changing environmental conditions is not a given, especially with the trend for warmer winters.

“A variety’s disease-resistance ratings are a good guide,” he says. “But as we’ve seen this year, local field conditions continue to trump them.”

Yellow and brown rust scores have come under pressure from suspected new races in 2019, while septoria has been an ever-present threat – even in a largely dry year.

As a result, Mr Willmott believes that disease risks to any farming business should be weighed up before final decisions are made, as variety resistance will need to bridge some of the gap that will be left when the multi-site fungicide chlorothalonil goes.

“Going forward, fungicide spend will have to be targeted and specific,” he says. “Variety choice and drilling date will have to be used to help with the resulting challenges.”

Lee Bennett, head of seeds at Openfield points out that yellow rust is changing and has affected far more varieties this year than it should have done, meaning that some of the Recommended List ratings are already out of date.

Starting with the Group1 milling varieties, he notes that Zyatt is one of those varieties and expects its yellow rust rating to tumble. “Strange things have been happening this year, so there are ongoing investigations.”

Those growing wheat for the Warburtons contract have the choice of Crusoe and Illustrious, both of which are unaffected, although Crusoe is very susceptible to brown rust, he warns.

“Its septoria rating is sound and it is resistant to yellow rust. Crusoe is a good first wheat and has been so consistent for quality.”

He notes that Illustrious must be grown according to the instructions – which include an additional 25 seeds/sq m and a front-loaded nitrogen programme.

Another consistent Group 1 choice is Skyfall, a natural second wheat that does well on lighter soils, says Mr Bennett.

“It is hungry for nitrogen, so use a bigger total dose and save some of that for later in the season. It’s also the only Group1 with resistance to orange wheat blossom midge.”

The Group 2 category has been strengthened by the arrival of Extase, with its 8.1 rating for septoria and 9 for yellow rust, along with an untreated yield of 95%.

Mr Bennett describes it as a tall, quick type, so recommends that it is not sown too early and that robust plant growth regulators are used.

“To get 13% protein with Extase could be a stretch, so go for a lower-specification option when it comes to marketing.”

Siskin is his other Group 2 pick, providing the variety isn’t sown too early and its straw strength is managed. “It’s a good choice for thinner soils.”

The Group 3s have been boosted by high-yielding Firefly, which on paper looks to have a very strong disease-resistance package.

“It has a 7 for septoria and there are no issues with yellow rust. However, it has suffered with brown rust this year, despite its 8 rating, so that score will fall next year. There are particular brown rust hotspot areas, such as Kent, where it has been a problem.”

Other Group 3s, Barrel and Basset, come with updates from Mr Bennett. “Both of these varieties are struggling with septoria now.

“However, for the south of the country, they do suit the export market and come with orange wheat blossom midge resistance. Just make sure you have the right agronomy package.”

Winter wheat varieties with good disease resistance are set to take a greater share of the acreage in the west of the country as fungicide options continue to decline, seed merchants and agronomists predict.

Ahead of the new growing season, growers are being advised to look for varieties with a minimum rating of 6 for septoria, as the typically wetter climate in the region is more conducive to the disease’s development.

As Chris Bean, Zantra’s technical director, explains, although both yellow and brown rust have been creating surprises and grabbing the headlines this year, there will be more chemistry remaining for rust control than for septoria.

That makes it important for growers to make the most of genetic diversity, he stresses.

“With all the changes that are taking place, it’s never been so important to keep a close eye on disease-resistance ratings and to investigate how varieties are performing in your area. Local growing conditions can have a great deal of influence on their results.”

Top milling wheat choices for the West are Zyatt and Skyfall, says Nick Green, of seed merchant T Denne and Sons, although Skyfall’s disease resistance is not as good as it was.

“Skyfall is the best variety to grow as a second wheat on light land, regardless of the end market,” he says.

“There’s a reason why it’s the most widely grown wheat – it has done well and can be pushed if top specification milling is the aim.”

Zyatt has been plagued by yellow rust all year, says Mr Bean, despite its current rating of 8. That rating is likely to fall once testing has been completed, so growers should be aware of that if they are intending to use a low-input approach.

“We will know more about any new yellow rust races in due course, but some people have been caught out this year,” he reports.

Of the Group 2s, there is excitement about the arrival of Extase, mainly because of its septoria rating of 8.1. Added to a 9 for yellow rust, it offers potential to save on fungicide spend.

“While other varieties show 3t/ha responses to fungicides, Extase gives 0.6-0.7t/ha,” says Mr Bean. “We’re testing a range of fungicide programmes on it this year, to see how it should be managed.”

He notes that it hasn’t responded to chlormequat on the company’s Shropshire trials site, suggesting it may need more growth regulation than the basic programme. “It doesn’t have the strongest straw, so that might need attention.”

Another Group 2, Siskin, remains popular, says Mr Green. “Of the selection, Siskin is the highest yielder, has a septoria resistance of 6.7 and is often grown as a feed wheat.

“However, if you do want to earn a milling premium from it, Siskin has to be managed. Don’t drill it too early or too late and keep the seed rate up.”

The Group 3 sector has been invigorated by the arrival of Firefly, which has a 7.0 rating for septoria. Its brown rust rating of 8, however, has come in for scrutiny this year, with many predicting it will be a 4 next year.

“Firefly has stiff straw and it meets the biscuit specification, but isn’t suitable for distilling,” says Mr Green.

Moving to the soft Group 4 wheats, he highlights the two Limagrain newcomers, Skyscraper and Spotlight, as high-yielding choices.

“They both have septoria ratings of 5.2, which might not be enough for the West. Of the two, Spotlight has the better specific weight and standing power, so may be more suitable.”