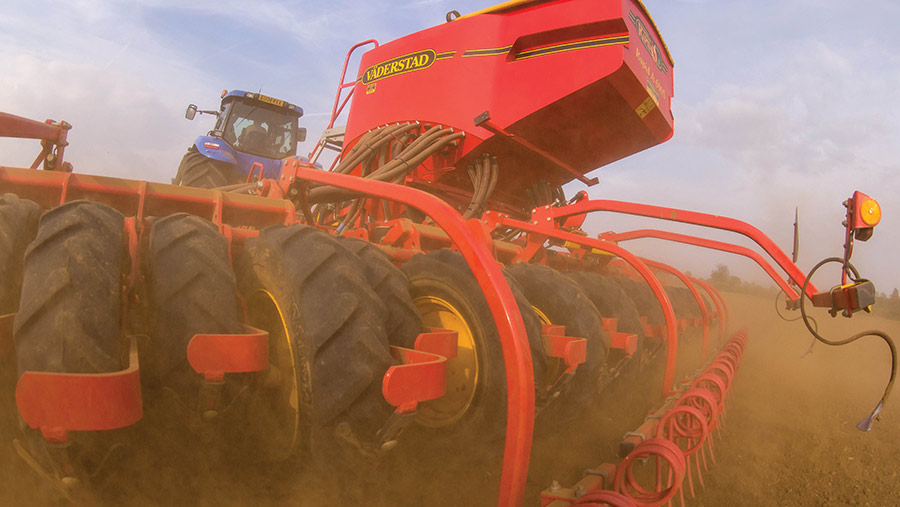 Wheat growers planning to drill earlier this coming autumn need to consider the increased septoria risk when using up seed left over from last winter.

That’s because some of the varieties being held over are unsuitable for early drilling, leading to septoria problems in the following spring.

After such a wet winter, many growers will be tempted to start drilling earlier, with fresh memories of failing to get any winter cereals into the ground before the weather turned.

See also: All you need to know about controlling wireworm in potatoes

“Many farms have quite a bit of undrilled seed and will be looking to use it this coming autumn,” says KWS product development manager John Miles.

However, he warns that some of the leftover seed is not suited to early drilling.

This seed has probably been bought for late October to November drilling, as part of a blackgrass strategy.

“You could see a variety with a 5 for septoria being drilled in mid-September and then we get mild conditions.

“Growers will then be looking at quite a monster crop of the wrong variety and then see a lot of septoria.”

The risk of drilling a variety with a low septoria rating early is that you may not be able to fix it with chemistry, adds Bayer commercial technical manager Gareth Bubb.

For example, drilling varieties such as Barrel in late September could result in a situation where “even if you throw the kitchen sink of chemistry at it, you will be unable to manage disease.”

If picking varieties for the earlier slot, growers need to look at those with a 6 rating or higher for septoria, such as Revelation, he says.

He adds that good stem strength is key to cope with the more lush growth.

Firefly is another option, being stiff-stemmed and rated a 7 for septoria, However, watch out for brown rust, he says.

Other varieties include Graham, Gleam and Parkin. Parkin is early maturing, but has a 5.5 rating for septoria, says Mr Miles.

Mr Bubb also warns that there will be more eyespot pressure when early drilling, meaning a T0 spray will be essential and the T1 will need some eyespot activity too.

The shift to later drilling

Before blackgrass, growers routinely drilled in the third week of September, to maximise tiller numbers and build the canopy architecture needed to achieve high yields.

Varieties such as Consort and Clare were suited to early drilling not being big, expansive varieties, while still being good at tillering.

Then came varieties such as Robigus which have good later drilled performance, explains John Miles of KWS.

End of October drilling often saw a reduction in performance with crops being a bit thin, while Robigus had a greater tillering ability.

Today, growers have a good choice of varieties that are much better suited for later drilling.

“Now we are seeing 10t/ha yields with December/January sown wheat after beet. There is no longer an impediment to high yields with later drilling,” he says.

We can’t get out and about right now, so please keep us up to date with what’s happening on your farm. Share a story, send us your pictures or tweet us: