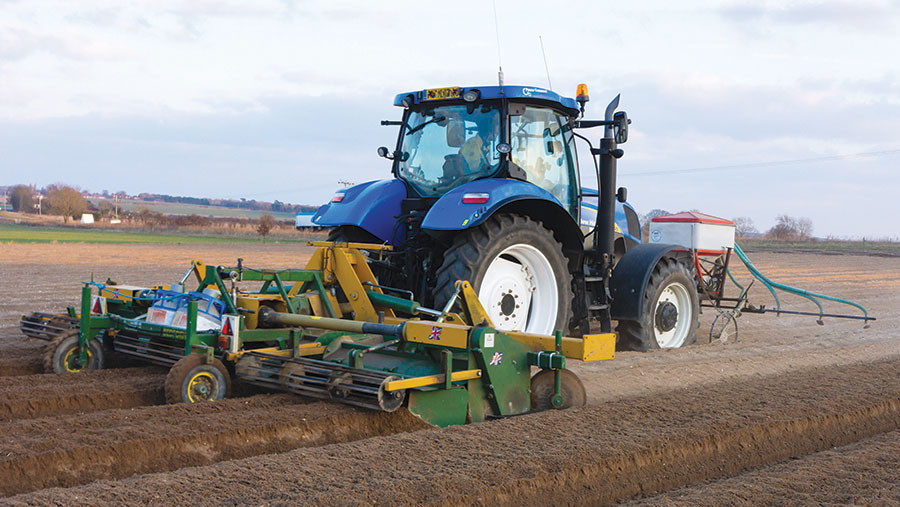 This season is the first where growers face managing wireworm without the key pesticide Mocap (ethoprophos) that has proved effective for some years in managing the costly pest.

This means there will be a greater reliance on less-effective alternatives in combination with with cultural controls to keep the pest in check.

Farmers Weekly looks at how growers can best manage wireworm, which in severe cases can lead to crop losses.

Wireworms are the larvae of click beetles and there are about 60 species in Britain. Only a few are pests and just three key species are responsible for most of the damage in potatoes.

These include Agriotes lineatus, Agriotes obscurus and Agriotes sputator. All three are widespread across the UK and usually occur in mixed populations in the same field.

All three are equally damaging, with low populations (<100,000/ha) causing significant economic loss. Entire crops can be written off in severe cases.

What about its lifecycle?

UK species of click beetles lay eggs in May and June close to the soil surface and under the protection of grass or weedy areas. The eggs hatch after four to six weeks and need vegetation to survive.

Larvae can spend three to five years in the soil before reaching maturity (typically in July-September), when they burrow down the profile to pupate over a three- to four-week period.

There are two main activity periods for wireworm larvae in the UK. The first is between March and May and the second between September and October, with the second activity period the most damaging to potato crops.

Which potato crops are at risk?

Potato crops planted after long-term grass (more than four years) have always been considered at greatest risk of wireworm attack, as the pest favours undisturbed soil.

Populations build and remain constant at an equilibrium under a ley. Probably about 60-70% of long-term grass fields are wireworm infested.

However, wireworm damage has increasingly been seen in arable-only rotations, and this upward trend may continue as reduced tillage regimes become the norm between potato crops.

Research has also shown that fields with a southern or easterly aspect are more likely to harbour significant wireworm populations, as warmer soil temperatures tend to be more favourable.

What cultural methods help with control?

Where possible, growers should avoid growing potatoes on land with a wireworm infestation.

In arable rotations, cultivation has the greatest effect on reducing wireworm numbers, physically killing larvae and leaving them exposed to predation. Ideally, land earmarked for potatoes should be ploughed and disc-harrowed in the autumn.

From previous experiments in commonly grown UK varieties, there is no varietal resistance to wireworm damage.

Where risk is identified and a crop will be planted, choosing an early maturing variety that is suitable for a range of markets enables the crop to be lifted early and avoid peak wireworm activity in September or October. 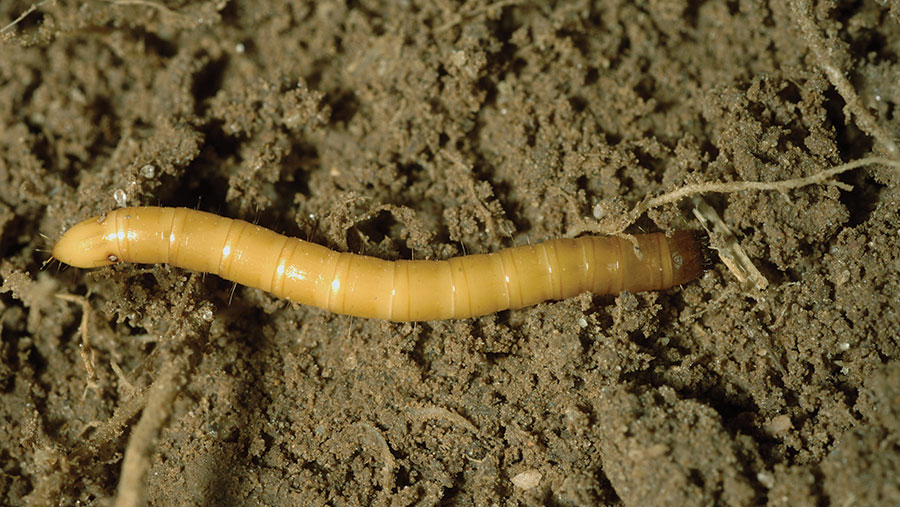 Are there any conventional chemicals left?

Growers are entering their first season without granular organophosphate insecticide Mocap (ethoprophos), which has been the most effective wireworm control agent for many years.

Nemathorin (fosthiazate) offers some reduction of wireworm damage, but not on the same level as Mocap and remains a product primarily aimed at potato cyst nematode control.

It also has a 119-day harvest interval in comparison with Mocap’s 80-day interval, making it unsuitable for short-duration crops such as salad potatoes.

Nemathorin’s approval holder, Syngenta, is developing a granular soil-applied insecticide with activity against wireworm, but it is uncertain when it will make it through registration.

How do I assess wireworm risk before planting?

Look for clues
Most growers will be familiar with the field history of their own land, but when renting in additional hectares, it can be more difficult to know if wireworm will be a problem.

As mentioned, aspect can influence risk, while field names (such as “Old Meadow”) and old stock fencing or water troughs can suggest a history of grazing.

Inspecting weed roots (such as sow thistle) and volunteer potatoes in stubbles for damage ahead of a crop can also reveal the presence of wireworm. They can also be spotted on top of beds when walking behind a working destoner.

In areas where potatoes are grown after grass, some growers use a hedge plough – one plough furrow or skimmer share mounted on an A-frame – towed behind a small tractor or pickup to turn over a few metres of grass turf.

This is then left 30 minutes or more before returning and inspecting for the presence or absence of wireworm on the surface.

Soil sampling
A soil-sampling method developed in the 1940s uses 20 10cm soil cores for a 4-10ha field and an aggregated sample is then analysed in the laboratory for larvae numbers.

It is best carried out in the autumn and early spring, ahead of planting.

As the limit of detection for wireworm is 62,500/ha and populations below this limit can still cause significant damage in crops, the method’s usefulness is questionable, unless infestation is high.

It is also expensive and labour-intensive, and there is a poor correlation between sample results and damage seen in the crop.

Bait trapping
Bait traps are widely considered a more effective risk-assessment method. These are small, perforated plastic containers part-filled with grain and buried in the soil for 10-14 days in late March or early April, once soil temperatures are higher than 10C.

The germinating seed gives off carbon dioxide and attracts wireworm into and around the trap, with any presence of the pest influencing site selection or any control decisions. 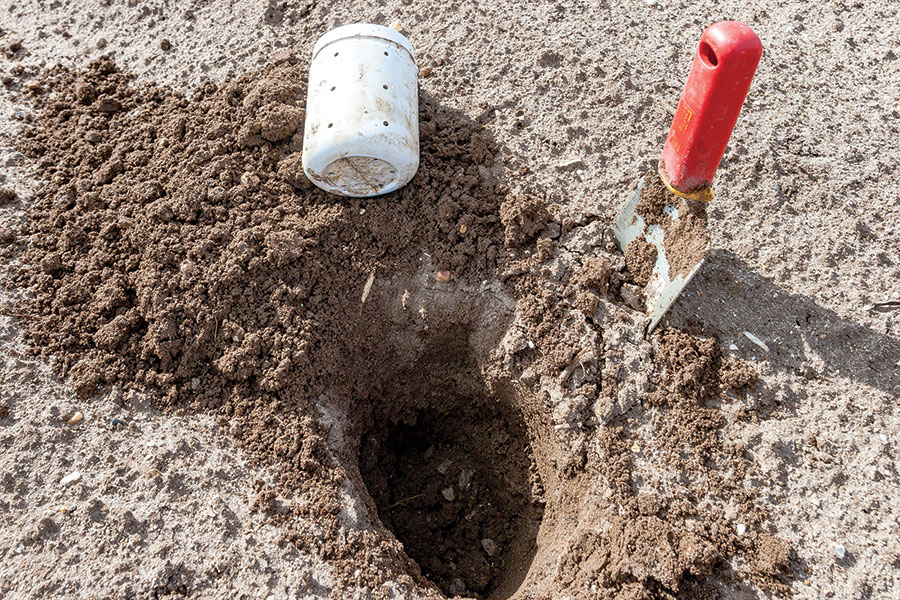 Bait trapping is only truly effective when there is little else in the way of food sources for the wireworms, so sites where there is a growing crop or weedy sites may mask economically damaging populations. It is also unreliable for use early in the season, when the soil is cold.

Adult trapping
Adult click beetles do not migrate and only move locally, so monitoring numbers can give a good indication of potential problems – but monitoring has to be done nearly a year ahead of planting a potato crop.

Placed in or around the edge of fields destined for potatoes the following spring, pheromone traps are much less labour-intensive and much more sensitive than soil sampling.

Trapping is best done in short periods (three to four days) in early May – leaving traps longer than this risks attracting beetles from outside the field.

Although traps can detect low levels of adults and provide an early warning of potential wireworm issues in the next crop, they don’t reveal larval numbers and should be backed up by other methods such as soil sampling or bait trapping.

Are there any biocontrols?

Trials in the UK have shown that mustard biofumigation crops are ineffective against wireworm. There are, however, a number of biological control products being developed or close to market that show useful activity against wireworm.

Currently coded BAF480BCI, BASF has managed to encapsulate the active in a granule that attracts wireworm and exposes them to the fungi, which kills them after several days.

Applied at 10kg/ha through standard granule applicators, the product has been in trials across Europe alongside Mocap. Mocap averaged a 67% reduction in wireworm tuber damage across the trials, with BAF480BCI offering a slightly less than 50% reduction.

BASF says it won’t stand up to the pressures of high wireworm populations alone, but will provide very useful results as part of an integrated control strategy where numbers are more “sensible”.

German company Biocare is another firm offering a similar product, but it uses the entomopathogenic fungus Metarhizum brunneum. At present, Attracap is only approved in Germany and Luxembourg.

Applied in-furrow, the granules absorb moisture from the soil, releasing wireworm attractant carbon dioxide, which brings the pest into contact with the fungi. After infection with the fungus, wireworms die after several days, depending on soil and temperature conditions.

The Biocontrol and Natural Product (BCNP) group at Swansea University, led by Tariq Butt, has also had some success in identifying and testing biocontrol agents, including Attracap and stains of a similar entomopathogenic fungus, Metarhizum anisopliae.

West Wales-based fresh produce grower and packer Puffin Produce provided trial sites for some of the research as part of the project, carried out by PhD student Ben Clunie.

He reports that the good wireworm mortality results achieved in the lab using the Metarhizum agents were not transferred into the field, with moderate results achieved, so currently the biocontrols wouldn’t be suitable for use in high-pressure situations.

However, he is optimistic that with further development, biological controls such as Metarhizum spp. will play a role in the future.

Mr Clunie’s study is also looking at the potential of natural fumigants and essential plant oils to inhibit or kill wireworm, with results expected once the project ends later this year.

Wireworm – view from the field

For independent potato expert Martyn Cox, the loss of a string of aggressive actives for controlling wireworm – from the 1970s up to Mocap’s withdrawal last year – means the industry must take a longer-term view to manage the pest.

Mr Cox says regulation of pesticides will not loosen and although the biocontrols coming through are useful, they won’t be as effective as Mocap, so combining all the integrated crop-management methods outlined in this article – most importantly, cultivation – is vital.

In addition, he sees the targeting of adults before they lay eggs on crop land each year as a means of driving down populations of larvae, which can be problematic for up to five years.

One adult click beetle lays about 150-200 eggs and identifying when they are active and targeting them with pyrethroid insecticides in the years between potato crops could help reduce larvae to minimal levels.

“The issue is, this would require more management input throughout the rotation, which is not always possible with current thinking, particularly on rented potato land.

“For landlords who wants to keep that revenue stream, increasing wireworm populations will soon take that away and they need to consider the benefits of controlling the pest. It also limits appeal to growers of other high-value crops such as carrots and onions.”

Increased pyrethroid use has many downsides, due to the potential effect on the environment and beneficial insects, as well as resistance issues.

As a more environmentally acceptable alternative, Mr Cox points out that Canadian potato producers have been successfully using mass pheromone- or light-trapping of adults to break the click beetle’s lifecycle.

“Although this sounds mad, pitfall traps can catch a lot of adults and the cost is low compared with alternatives,” he says.