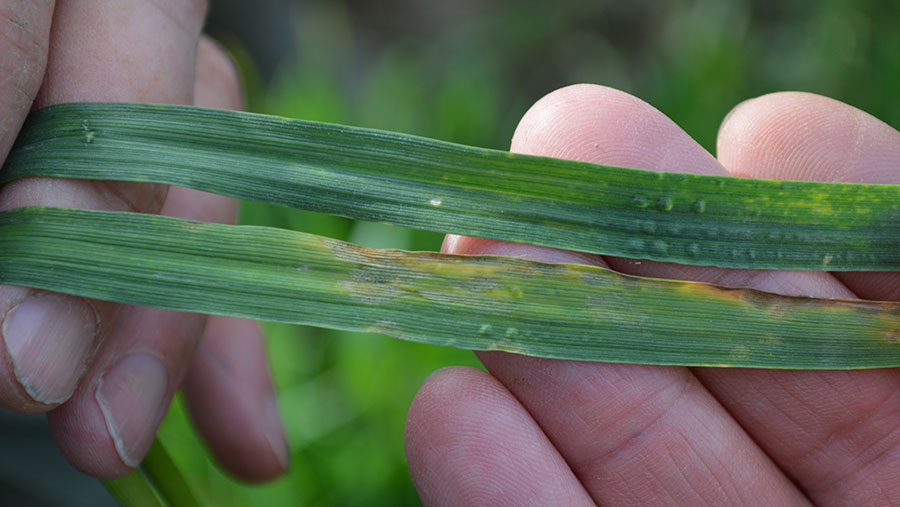 Disease levels are rising in the nation’s wheat crops with the wet weather likely to encourage septoria to spread and put growers on alert to make sure their fungicide programmes are spot-on.

Farmers Weekly took off in the Bayer Crop Doctor helicopter with two independent cereal disease experts to assess the risk to wheat crops across four sites in England, and our videos from each site highlight the current disease situation.

Disease levels have risen sharply at David Hoyles’ farm in south-east Lincolnshire over the past four weeks, with wet weather encouraging septoria in his winter wheat crops.

Watch the video report below from Mr Hoyles’ farm in Lincolnshire.

Septoria was present in the bottom of wheat crops on this site, just south of York, and much will depend on the weather in May as to how serious this disease threat might be.

Watch the video report below from this trial site in North Yorkshire.

Disease levels were the highest at this wet western site, just south of Hereford, with septoria on leaf 5 of wheat crops and further rains could easily help the disease climb higher.

Watch the video report below from this trial site in Herefordshire.

The Beast from the East cold spell had put crops on this light land site, south-west of Oxford, under stress and appeared to have allowed septoria to come into crops early and spread more quickly than expected.

Watch the video report below from this trial site in Oxfordshire.