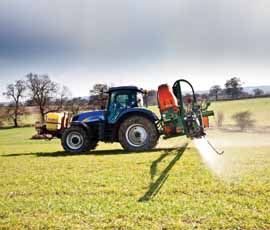 High levels of mildew in some cereal crops because of the continuing mild weather are forcing our Crop Watch agronomiss to consider whether an autumn fungicide application will be required.

“With such mild weather the mildew has had a free run, with no frosts to check disease development,” said David Martindale of Arable Alliance, Yorkshire. “Although exceptional, some crops of barley will warrant a mildewicide so that the barley plants can maintain shoot numbers, biomass and ultimately yield.”

The mild weather has also accelerated the growth of blackgrass across the UK, which is causing difficulties due to spray opportunities becoming increasingly limited with damp conditions early and late in the day.

In the East, Philip Vickers of Farmacy, Lincolnshire said: “The temperatures have encouraged rapid blackgrass growth – if the blackgrass has two or more leaves, I am still encouraging autumn Atlantis (iodosulfuron + mesosulfuron) use,” he said. “At the same time we have to be mindful that this product needs to go onto a dry leaf and dry on.”

Herbicide programmes in oilseed rape crops are also proving difficult due to large canopies not allowing an even application on soils and soil temperatures being too high in parts of the UK for propyzamide and carbetamide-based applications to be activated.

In the West, Neil Donkin of Countywide Farmers in Gloucestershire believes it would be advisable to wait until frosts have thinned canopies.

“Many growers are waiting to apply propyzamide or carbetamide to rape, but the soil is still too warm on the lower ground and crop density is too great for the chemical to reach the soil,” he explained. “We shall have to wait for frosts to knock back the leaves to have any chance of an even application.”

Care must be taken not to let grass weeds become too deeprooted or wait until drains are running, resulting in environmental issues, added Mr Vickers.

Phoma is widespread in oilseed rape, although not considered high risk at present. Where there is a high presence, a fungicide can be added to propyzamide/carbetamide applications.

“I was hoping to time my fungicide applications to coincide with propyzamide/carbetamide applications,” said AICC agronomist Tod Hunnisett. “But the soil temperatures are still far too high for these to work properly, so it looks like it will have to be a separate pass with the fungicide.”