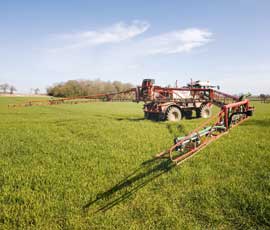 Many agronomists were rethinking T1 spray strategies at the start of this week as catchy weather raised disease risk and threatened to delay applications.

Leaf 3 was emerging in the more forward crops and most T1 fungicides would be due in the next week, said Cambridgeshire Agrii agronomist Will Foss.

Delayed treatments might have to have to be bolstered to increase eradicant activity, he added.

“Septoria and stem base diseases have got going, aided by regular leaf wetness. Yellow rust is also becoming active again, although frosts will help slow development. Many wheats are very well tillered and will also need robust PGR treatments.”

Winter wheat crops in Yorkshire were at, or very close to, GS32, said AICC agronomist Patrick Stephenson. “Rain has removed the option of cheap and cheerful at T1 – robust is likely to be the word most banded about.”

Half-rate triazoles and chlorothanonil would be the backbone, with various additions due to cope with rust, take-all and mildew.

“As usual in the South West, Septoria tritici will be the primary target. Some highest-potential crops will receive an SDHI, as there is likely to be at least four weeks until T2 in mid-May – being in a mild area GS32 is reached early, but the flag leaf rarely emerges any sooner than elsewhere.”

“Epoxiconazole is my triazole of choice because it is better on yellow rust. I am using it either straight or in mixture with boscalid or isopyrazam, depending on crop potential and disease risk.” Chlorothalonil would be added without exception, he added.

Flowering OSR crops were being treated with strobilurin/MBC against sclerotinia. A second fungicide is planned three weeks on. “With rapeseed worth about £400/t, a two-spray programme really is a no-brainer,” said Mr Brown.

Many of Mr Stephenson’s crops, which are flowering despite the cold, will also receive two sprays. “Prothioconazole, with its broad-spectrum disease control, will be the mainstay.”

BYDV is showing up in winter cereal crops, notably barley in the South and West. “At the moment it seems to be limited to barley, but the disease does not tend to show wheat and oats until later,” said Mr Potts. “Even some crops planted with Deter-treated seed are affected, though symptoms are mild.”

Sugar beet had generally all emerged, Mr Foss reported. Many were in need of their first post-emergence herbicide but frosts were delaying treatments.

Much-needed rain and cold weather had slowed potato planting progress. Although seed quality had been better than expected, particularly given the number of seed crops in Scotland downgraded due to blackleg last year, John Sarup of Spud agronomy recommended seed sitting in bags waiting to be planted should be decanted into CIPC-free boxes, ventilated and kept cool.

Read the reports in full.