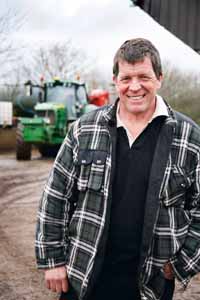 Devon’s rolling hills don’t lend themselves naturally to large-scale arable farming, but our new south-west Barometer farmer is managing to tame the landscape.

Steve Lee farms 685ha of rented and contract-farmed ground stretching up to 30 miles from his base in Black Dog, near Crediton.

Much of the ground is steep and located in small fragmented blocks with wide variation in soil type. So it needs to be managed carefully, he says. “We block crop ground as much as possible, try to keep varieties together and work the heavy clays first.”

Because the business is so labour intensive and all ground is rented or contract-farmed, it is particularly sensitive to rising input costs and low cereal prices, he admits. “Rents are changing all the time and diesel cost is starting to become a big issue. It would be a lot tidier if it was in a ring fence, but we make it work.”

A fleet of eight John Deere tractors, a 5000-litre Landquip Intrac sprayer with a 30m boom and a high capacity combine help him keep on top of the workload. “It seems like I’m over-kitted, but we need to be able to cover the ground and we are always busy on the vegetables.”


Feed wheat forms the base of his rotation and this year he has established roughly 300ha. Lear from Nickerson is his preferred variety as it offers outstanding Septoria tritici resistance and yields up to 10t/ha, he says.

“It’s not on the Recommended List, but I think it’s fantastic. I saw it coming through trials a few years ago and have been really pleased with it.”

It has relatively tall straw so lodging can be a problem, but it responds well to a robust plant growth regulator programme, he says. “It’s important to find varieties that work well in the area and some on the Recommended List aren’t suitable.”

Lear performs well at a range of drilling dates, so he’s planted a small trial area on 1 February to see how it copes in the late slot.

Einstein is grown in the second wheat position because of its early maturity and his fungicide programme manages to keep septoria at bay. “I’m not a great fan of second wheat, but Einstein suits the farm and it’s late to drill and early to harvest.”

Sahara and Viscount make up the rest of the wheat area as well as a 15ha trial block of Scout.

Oilseed rape is his second crop and the 80ha in the ground this year is split between Grainseed ES varieties Cubic, Alienor and Astrid. Yields average just under 4t/ha, he says.

Profitable break crops are hard to come by so he has gradually moved to spring options such as beans, barley and, most recently, grain maize (see panel).

“Winter oats used to be a key crop, but high brome populations meant we had to reduce our area dramatically. We’ve just got 12ha planted this year, which should go for milling.”

Since scaling back oat growing and increasing spring bean area, brome populations have rapidly declined and it is now all but gone, he says.

This year he plans to establish 105ha of Fuego. “I get on much better with spring beans than winter beans and they help spread our workload – yields range from 1.5 to 2t/ha.”

Mr Lee also hopes to plant 37ha of spring barley to multiply seed for Matford Arable Systems, which also carries out his agronomy work. “We should start putting the barley and beans in this month (February).”

Greenstar GPS on the SF1 signal is fitted to all of Mr Lee’s prime movers and has helped cut cultivation costs considerably.

This season he is taking precision farming one step further by varying P&K applications. So far, he has mapped his main 140ha farm at Chawleigh, but plans to zone all rented ground in the next few years. “We also had it mapped for lime and that varies a lot.”

Masstock zoned the farm using the Soilquest system and application maps have been sent on a memory card, which will be loaded directly into the fertiliser spreader control box, he says.

A non-inversion tillage technique is used to establish most crops, but all ground is ploughed after maize, says Mr Lee.

One high capacity John Deere S690i Hillmaster combine with 10m (30ft) cut and four-wheel drive services the whole farm, supported by up to five tractors and trailers running to and from the central grain store, he says “We’ve got some seriously steep slopes so the Hillmaster is essential.”

Mr Lee grew 25ha of Podium grain maize for the first time last year and plans to up the area to 90ha this spring.“We are really short of profitable break crops and, hopefully, this one is going to make a bit of money.

“Yields are slightly lower than a winter wheat crop and drying costs are higher, but prices between £210 and 220/t mean it stacks up well, he says.

“Also, it is slightly lower input and produces a lot of organic matter, which you can plough back into the soil.

“Last year, yields averaged 9t/ha and most was cut at 35% moisture. “We dried it down to 22% in the mobile drier, left it for 10 days and put it through again to finish it off.”

Combine and drier capacity are the main bottlenecks, despite having an eight-row maize header and a 20t Opico mobile drier, he says. “We had to farm some of the drying out last season, so I’m hoping to go to a 40t machine.”

The crop will be planted in April and should be ready to cut in November.

Weed control is another challenge so he plans to start with a pre-emergence herbicide. He will also use a strobilurin fungicide to control disease and boost cob size.

All ground is ploughed after maize to reduce risk of mycotoxin infection in following cereal crops.

Steve Lee farms 485ha of rented ground from his base in Black Dog in central Devon. An additional 200ha is farmed under contract farming arrangements plus contracting work on a further 120-160ha. Mr Lee rents one 60x30m grain store with a 30x10m drying floor at his main farm in Chawleigh. Soils vary considerably, ranging from light loams to heavy yellow clay. Some is Grade 1, but most is Grade 3.