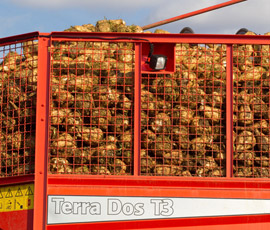 Growers can be confident that British Sugar will not pull the rug from under farmers who refuse to sign contracts before 31 July, says NFU Sugar chairman William Martin.

NFU Sugar and British Sugar remain at loggerheads over beet prices, with the union rejecting the processor’s offer of £30.67/t for the 2014 crop. NFU Sugar is holding out for £35.50/t.

Mr Martin said British Sugar had stated “very plainly” that it had “no intention” of removing contracts from growers who had not signed contracts by 31 July.

“If you want to await the outcome of our negotiations to see if there is something better, then the prudent thing to do is to delay signing,” he said.

Mr Martin added: “Growers do not need to see 31 July as an important or artificially imposed deadline — do not feel pressurised to make a decision before the outcome is known.

“There is no externally imposed deadline which you need to worry about – give the negotiations time to do what they can do.”

Have your say on beet prices