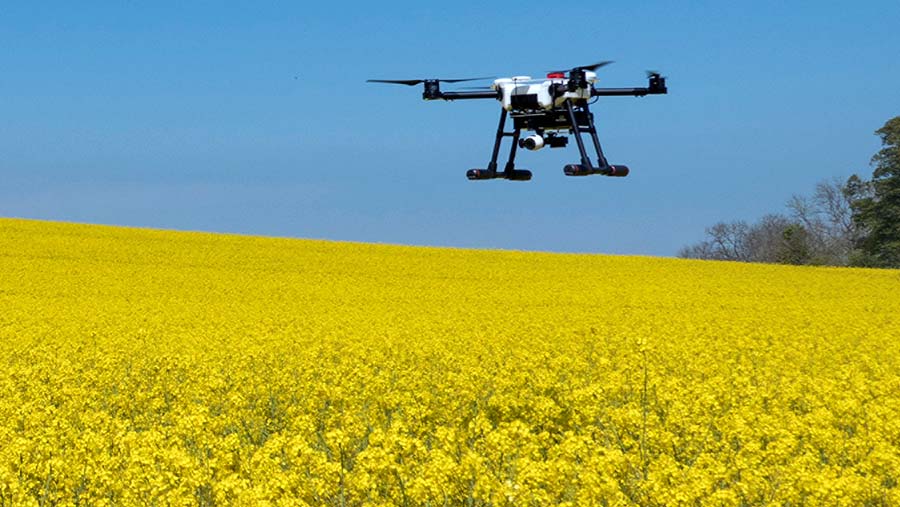 Reducing variation in the thickness of oilseed rape canopies in a bid to pump up yields is the focus at one family farm in Northumberland, using a drone to provide a different perspective on the crop.

This season brothers Jack and Hugh Wrangham have been experimenting with mapping oilseed rape on the family’s 2,700ha mixed farm, focusing on using this information to create highly accurate variable rate fertiliser applications.

The farm grows winter wheat, winter barley, oilseed rape, beans and oats and is also home to 3,500 sheep and a 150-head suckler herd.

See also: Two arable farmers explain how they use drones

Jack started the precision farming business Drone AG at East Lilburn Farm four years ago, and his brother Hugh has since come on board after a stint testing high-tech sports cars made by McLaren.

They have been using drone systems on their own farm for the past few seasons and pride themselves on being “the farmers who know drones”, basing their solutions and farmer training on what they have learned on their own farm.

“We’re still learning, and as we learn we pass that knowledge on to our clients too, making us the best option to stay at the forefront of practical drone use in precision agriculture,” says Jack.

For most of this season, the brothers have been mainly focused on using their drone to help them better apply fertiliser to their oilseed rape crops by mapping crop density.

Spring work involved scanning and mapping the farm’s entire crop and applying a simple visible atmospherically resistant index (Vari) algorithm to the data, which uses visual imagery, but applies an atmospheric correction to improve the quality of the data.

About 170ha of oilseed rape was mapped in about five hours using one drone system, with fertiliser prescriptions generated the following day.

“We found the Vari maps provide a very good indication of green biomass on the ground. And as biomass has been shown to correlate well with crop nitrogen uptake and availability, the maps give a good indication as to the spring fertiliser requirements,” he reveals.

By zoning the maps and applying prescription rates to each zone, the brothers were able to easily import this into a commonly used machinery controller application for their fertiliser spreader.

The ultimate aim is to use drone data to even the crop up, achieve canopy sizes closer to the optimum for yield and reduce lodging risks.

“Generally our OSR is looking good and this year’s yield data should provide some insight, but due to the number of variables at play we fully expect to be doing this and refining the process for a few years before we expect to see consistent and obvious improvements to our average yields.”

Hugh adds that for less than £2,000 farmers can have a drone system capable of scanning their crops and use simple and low-cost software to generate their own variable-rate prescription files, which can be transferred to their spreader or sprayer controller via a cloud data transfer service such as Dropbox.

As a general rule of thumb oilseed rape growers should aim for crop canopies to hit a green area index of 3.5 at flowering. As part of their mission to boost yields, the Wranghams want to find a link between canopy size, flower density and yield potential at the flowering stage.

“As OSR typically achieves a thick and difficult-to-walk-through canopy by the flowering stage, we believe drones can be very useful,” explains Hugh.

The bright yellow at flowering means visual data doesn’t work so they began experimenting with various indices to assess canopy density and flower density at flowering.

The goal is to gather data which not only proves a correlation between canopy/flower density and yield potential but also gives a farm benchmark to work to – this being an optimum canopy size to achieve in future years through precise canopy management, using variable fertiliser or growth regulator applications.

“This, we hope, will allow us to steadily improve our yield potential over the next few years. Of course, we can’t manage certain variables such as the weather, but if we can consistently approach maximum yield potential for a given year we should see improvements,” says Hugh.

A new type of drone called the Storm Agri Pro, which is built to better withstand the changeable British weather, is taking to the skies to scan the farm‘’s crop.

Most off-the-shelf unmanned aerial vehicles (UAVs) that are available will only manage to move about in gusts of wind up to about 20mph and if it’s raining they won’t be moving at all.

This newly developed quadcopter UAV, launched earlier this year, is aimed squarely at agronomists and farm businesses wanting to get maximum air time with this powerful technology – whatever the weather.

The Storm Agri Pro is fitted with a 12 mega pixel 4k camera, giving a resolution of 5cm per pixel at an altitude of 120m. By contrast, more commonly used satellite images have an accuracy of 3m per pixel on average.

Watch the Storm Agri Pro in action below.

While it can tolerate a rain shower or two, it does still have its limits so flying in a full bore storm is not recommended.

“Your average drone used on farm can’t handle changeable conditions, so if you were mapping a field and saw a band of rain moving in, you’d have to stop the scan and land immediately,” says Hugh.

“With this system, you would be able to finish the job because it is built to withstand and work in such conditions.”

Older brother Jack adds that in Northumberland they only have about 25 days a year on average when conditions are good enough to use a more conventional drone, but this more robust model means they can now get airborne about 120 days of the year.