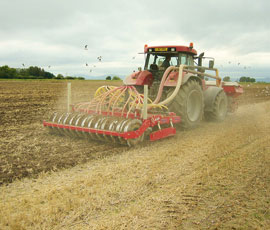 Using one-pass cultivators and subsoilers to establish oilseed rape is a tried and tested technique that is now widespread in the UK, but one grower has been using it in cereals.

Richard Kane from Limavady on the north coast of Northern Ireland is using his modified Sumo Trio for the establishment of all his crops, which include winter wheat, winter and spring barley and oilseeds.

“We have had some very wet seasons in recent years, with ploughing and pressing a real struggle,” says Mr Kane. “You need numerous passes to get a seed-bed, and in wet conditions it was resulting in considerable damage to soil structure.

“Compaction caused during seed-bed preparation was resulting in waterlogging and large areas of crop being lost,” he adds.

The work window to establish winter cereals is becoming increasingly narrower, therefore work rates needed to be improved to make the most of optimum conditions, says Mr Kane.

“I went to see a Sumo Trio working in England and was impressed with the results when establishing cereals, so I thought I would see if it could be used successfully here in Northern Ireland,” he explains.

A front-mounted Accord air-seeder was purchased from Scotland, then seed and fertiliser distribution heads were made and fitted by Sumo, although Mr Kane had to make some minor adjustments on farm.

Fertiliser is distributed in front of the Trio to ensure incorporation with the soil, with seed placed along the final row of discs.

“Seed depth control is primitive, as you can only adjust the angle at which the outlet pipe blows the seed on to ground,” says Mr Kane. “It can take some fine tuning, but works well enough.”

Mr Kane applies about 50kg/ha of seed-bed fertiliser in winter cereals to help the crop through the winter. “The straw left behind in min-till systems utilises nitrogen in the soil to break down, so I find some straight urea keeps N levels where they should be over winter,” he explains. 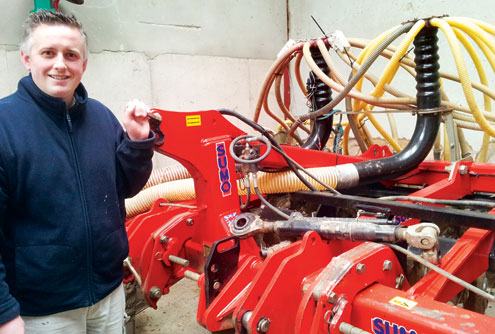 Seed rates are higher than conventional drilling, with Mr Kane expecting between 10-12% seed losses in the system. This is due to the uneven placement of seed and rougher seed-bed,” he says.

“Wheat is sown at 150-185kg/ha, with winter and spring barley also at similar rates,” says Mr Kane. “Where conditions allow, we will ring roll after establishment.”

The farm has been achieving comparable yields with those of the previous plough-based system and also a more even establishment, in less time.

“We have been achieving an average of 10t/ha in wheat and around 8.5t/ha in winter barley.

“I am convinced that we are doing the right thing. We haven’t had the bad years that we experienced with the plough, despite losing 80ha this year to exceptionally wet weather,” says Mr Kane.

“Everything is now being subsoiled so we have seen an improvement in soil structure, with less compaction and subsequently less waterlogging,” he adds.


Min-till systems are associated with the build up of grass weeds, with Northern Ireland considering meadowgrass the biggest threat. However, Mr Kane has seen no noticeable increase.

“Herbicide application is helped by our wide row spacing of 10in, allowing better coverage of weed targets. It is also in my interests to keep the crop clean to ensure there are no cultivation difficulties associated with weeds in min-till systems when establishing the following crop,” says Mr Kane.

The wide row spacing also has benefits for the crop health, allowing better use of light and nutrients, he adds.

After seeing the success of his adapted Sumo Trio, Mr Kane is now considering investing in Sumo’s new Versadrill Plus, which will be available for delivery in autumn 2013.

“It is a one-pass machine, and we can adapt it to maintain our wider row widths. It will be doing a similar job to our Trio but we will have more control over seed placement,” says Mr Kane.