Whether you like it or loathe it, no-till farming is back in fashion, with experts and loyalists pushing it as the answer to improving the health of the nation’s sickly soils.

Growers cannot escape the extensive coverage on Twitter, including the #rootsnotiron hashtag and tweets ranging from news pieces with scientists claiming it can save the earth, to meetings with experts alleging it can rescue profit margins.

As a result, a growing faction of UK growers is now well-versed in the resurrected practice of direct drilling, where the seed is drilled with minimal soil loosening, all neatly done in a swift pass with one bit of kit.

Richard Boldan is new to no-till, but does recall a short-lived era of direct drilling on his East Yorkshire farm nearly 40 years ago, before being abandoned in favour of heavier cultivation. 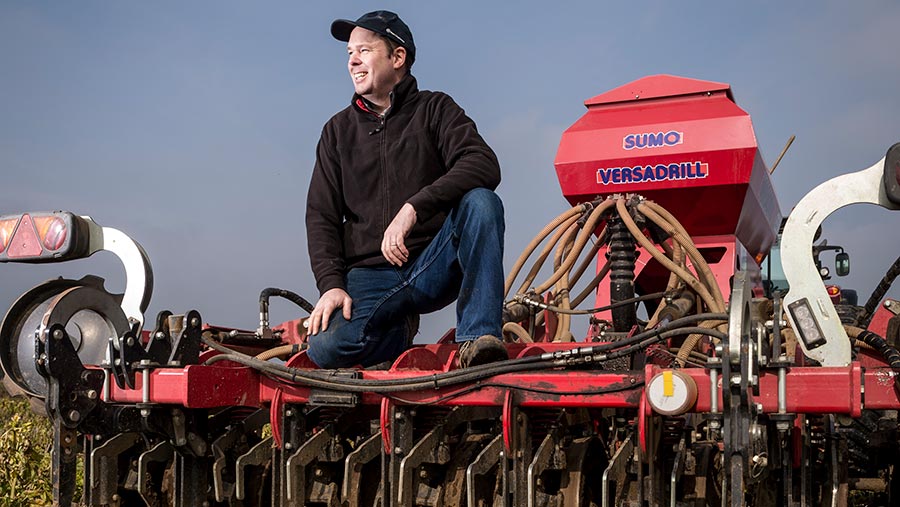 “I’m old enough to remember it from the 1970s and my father actually won a Bettinson DD direct drill in a competition with ICI.

“I was too young to really appreciate the pros and cons of direct drilling at the time but I remember it went back in the shed and didn’t see the light of day for a very long time.

“From that I’d always had the impression that direct drilling didn’t work very well or there were issues with it, but then again I’d known that there were some people who had stuck with it and been successful.”

Mr Boldan made the change over to no-till last autumn, something he says was never really on the agenda until about 18 months ago.

He farms 75ha of easy-working silty and sandy soil in the village of Asselby, with land running right down to the north bank of the River Ouse, in the shadow of Drax power station and numerous wind turbines generating renewable energy.

It is the potential for sustainability that drew Mr Boldan into no-till crop production, with the aim of securing the future profitability of the farm and maintaining fertile soils to drive up yields.

Producing sugar beet on the farm ceased when the York sugar factory closed in 2007 and growing potatoes became unviable on such a small scale, so the rotation was adapted to better suit reduced cultivation.

“I’d always had a keen interest in looking after the soil with imported manure to try to improve organic matter for years.

“Part of the reason for first switching to less cultivation was to try to keep the crop residues near the surface, but having gone to meetings I started to learn that the less you can do to disturb the soil, the better.”

Gradually, a switch from ploughing to a shallow disc and subsoil system was made and Mr Boldan started seeing benefits to soil structure.

He explains that the primary objective of running his no-till regime is maintaining healthy soils, making the land more productive and protecting organic matter.

He also sees the cost-saving element as important given current depressing grain prices.

“I’d like to increase productivity and protect my income in 20 years time. Every penny counts these days; we’ve had some good years where we haven’t had to trim the fat but the current climate is making us focus on that now.

“I’ve not done any figures yet as a comparison of cultivation costs, but I can safely say that if you’re going over the field once with a drill, you’re going to use a hell of a lot less fuel than ploughing and power harrowing and then drilling and rolling.”

“I’m not here to keep bugs and worms in the soil for the sake of it, I want something back for it. I think it’s a long-term process to protect farm income in the future – there’s a wheat-yield plateau and I think it’s tied in with soil fertility.”

Part of the reason why no-till fell out of favour in the late 1970s and early 1980s was because growers lost their grip on grassweeds, and so yields took a knock.

A strict policy on preventing weed seed being imported into fields has kept Box Tree Farm relatively weed-free over the years, with greater populations of broad-leaved weeds and meadow grass than blackgrass.

Provided that hygiene standards are maintained and blackgrass seed isn’t brought on to the farm by a combine he shares, Mr Boldan doesn’t see weed control becoming an issue.

In fact, he suspects that the new no-till operation will bring with it an eventual cut in the amount of herbicide needed.

“I am hoping that I can get away with using less herbicides in the future, because as I get a layer of crop cover and residue on the soil surface and by not disturbing the soil as much, it should hopefully mean there are less weeds stimulated to grow.

“It’s not my main reason for doing it, but I know people who are further down the road of no-till who can cut back on grassweed control, so hopefully we can get some of that added benefit.

“I’m not an organic farmer by any means but if you can avoid spraying a crop then from both a cost and an environmental point of view, it’s got to be the right thing.”

By far the biggest sticking point for many growers looking to take the plunge into no-till is the required change of kit.

This can prove costly, with some new direct drills priced at about £200,000 – not terribly appealing when wheat prices sit at £100/t.

Mr Boldan went for a used 2010 Sumo Versadrill, which was conceived in a joint venture with Northern Irish firm Moore and cost about £52,000 when it was first on sale as a new piece of kit.

The drill got its hopper, metering system, frame and tines from Sumo, with Moore’s Unidrill coulter units taking responsibility for seed placement.

He admits that buying the versatile drill was a considerable amount of cash to stump up for his acreage, but it was picked for its min-till cultivation capabilities. It can be used for contract work where no-till is not welcome.

“On the contracting side, I’ve got work for both direct drilling and min-till drilling. In a subtle way I’m having to convince contract growers that no-till is viable – some are open to it and keen to try it, others won’t entertain it.

“I think it’ll be a slow process; people will see others getting on well with it and it will gather momentum. Longer term, if it all works out I may change to a newer drill.”

He confesses the old plough still lurks at the back of the machinery shed. Not being worth more than a few hundred pounds he decided to keep it for any contract work that comes up or in case of dire emergency.

The big challenge will be if a wet year comes early on in the transition phase, before the land has some years of no-till under its belt. 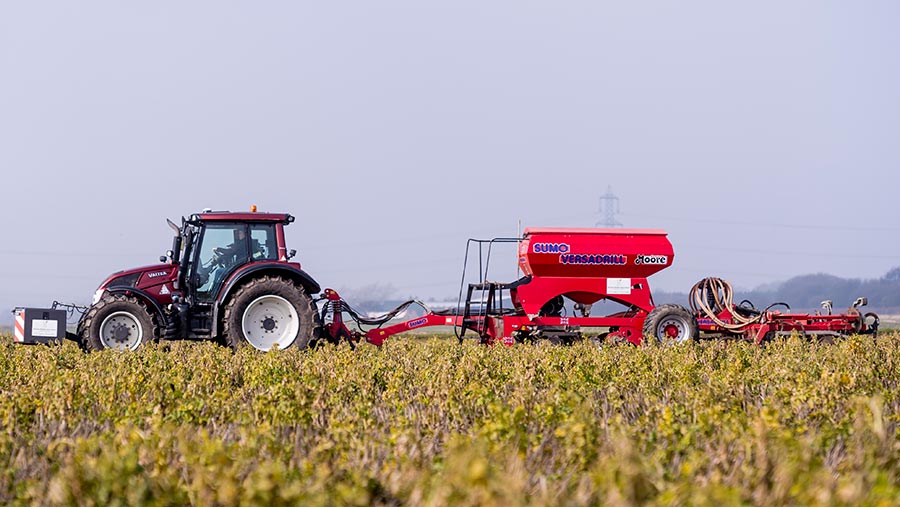 “Everyone asks what happens in a wet year, which is something I’m still asking myself,” he chuckles.

“I’m going to persevere. I won’t just reach for the plough to get me out of trouble; it’s a mindset and you have got to stick with it.

“If it is a wet autumn and I can’t drill then I wouldn’t sweat too much and drill it in the spring. The issue is if you do a lot of soil structure damage in a wet harvest.”

Winter wheat was direct drilled in mid- to late September and established well after vining peas were harvested in July.

An oil radish and phacelia cover crop captured residual soil nitrogen and was sprayed off two days before drilling the wheat directly into the remaining residue.

Contrary to common fears that cover crops residue can play havoc with drilling by causing blockages, Mr Boldan found no such issues.

Only giving the glyphosate about 48 hours to do its job before drilling has led to some oil radish plants surviving, but not at a level that could rob yield.

“This is all part of the learning process,” he says.

More lessons were learned after the oilseed rape was direct drilled for the first time at the beginning of September.

“I upped the seed rate because I thought the seed-to-soil contact wouldn’t be so good, but actually it worked out that I could have drilled a rate similar to a cultivated seed–bed.

“The oilseed rape was drilled in wider rows so it was really only the little bit either side of the row that was disturbed and there was very little weed emergence.

“I did spray with an early post-emergence herbicide because that’s what we’ve always done. In hindsight we could have probably held off and sprayed later on and that’s probably what I will do in the future. The same goes for cereals.”

Farmers Weekly will be catching up with Richard Boldan later on this season. In the meantime, you can stay up-to-date with his arable antics by following @RBoldan on Twitter.