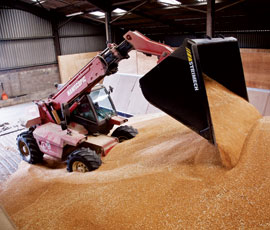 Gavin Hunter has made good progress with harvest at Tilbrook Grange, Huntingdon, Cambridgeshire, and is now waiting for his wheat to ripen.

“Cutting barley was a matter of dodging the storms, but we’ve finished now,” he said.

Bushel weights for the Cassia barley stood at 68kg/hl, with yields at 8.5t/ha, which was pleasing.

Mr Hunter was also happy with his Cabernet oilseed rape, which he estimated had yielded around 4.75t/ha. “That’s better than our usual average.”

Although harvest had gone well so far, Mr Hunter was not as confident about his 280ha of winter wheat.

“We’ll probably make a start next week and see. It’s likely to have a low bushel weight, but I won’t know until we start cutting.”