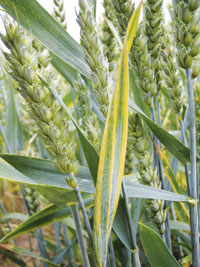 The disease, which affects barley, oats and rye as well as wheat, shows up as a bright yellow stripe on a leaf that extends all the way onto the leaf sheath. “It results in small tillers, poor grain fill, more head moulds and premature ripening.”

Trash-borne, it was predominantly a problem in long-term wheats, he said. “It is worth monitoring yields – if they do start to decline once you’re past the take-all decline period – then it is worth thinking about going back to a normal rotation.

“Once you’ve got it, it doesn’t get any better. There is no decline of the disease.”

Research was suggesting that ploughing, just as with eyespot, could exacerbate the problem, while variety trials on a badly-infected site showed variety choice could minimise infection levels.

Viscount and Consort, for example, appeared to have some natural resistance, while Alchemy, Oakley, Robigus and JB Diego were weaker, he said.