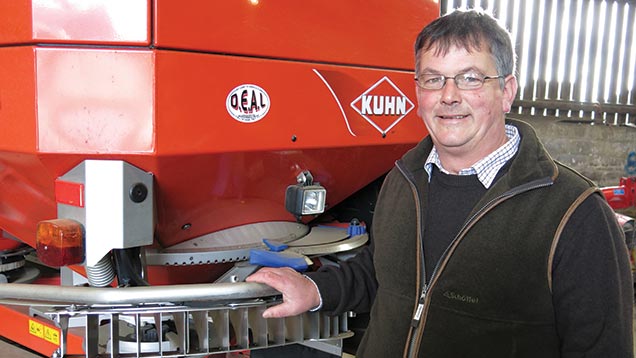 Combining high wheat yields with a top milling specification is something that mid-Glamorgan grower Richard Anthony has managed to do for the past seven years.

Even in 2014, when many struggled to prevent high yields diluting grain protein content, the 200ha of milling wheat being grown at Cae Pentre, Tythegston, averaged over 12t/ha, with protein content approaching 14% and premiums of up to £50/t being achieved.

Getting the nitrogen management right has been the key to this success and remains essential as new breadmaking varieties are introduced, explains Mr Anthony.

“It requires constant evaluation, as well as a willingness to change plans if conditions dictate,” he reveals.

“That means knowing the levels of nutrients available from the bag, the soil and the plant, so that we can manage the relationship between them.”

About 400ha of winter wheat is grown on the South Wales farm, split evenly between feed and milling varieties. Skyfall and Crusoe are his two milling varieties this year, but last year it was all Crusoe.

“The agronomy for all of the wheat is pretty similar,” he says. “We may use a better fungicide for septoria on the milling varieties and prioritise them when we spray – but that’s about it.”

The feed wheats tend to follow maize, while the milling varieties go in after oilseed rape or grass, he reports. “Either way, cultivations and seed-bed preparation are the same for both.”

Differences, however, come in with crop nutrition, especially where nitrogen applications are concerned. The farm has always used poultry manure and compost to boost soil organic matter, and with P and K indices at a healthy 2.5-3.0, nitrogen is the biggest variable.

For that, Mr Antony works with his GrowHow adviser Ross Leadbeater, so that they can plan the nitrogen management accordingly.

“The later applications of nitrogen are the ones which have the biggest effect on protein levels,” explains Mr Leadbeater. “But they shouldn’t be considered in isolation. Previous years and other management practices have to be taken into account.”

As a result, N-Min tests are done in early-mid February from 60ha blocks of land that share similar soil types, manure applications and rotational position. This allows them to assess what nitrogen reserves are in the soil, as well as evaluate the level already in the wheat crop by using green area index (GAI) analysis.

From there, they consider the five-year production averages, together with any specific targets for the current growing season. A fertiliser plan, based on the amount of extra nitrogen required and application timings, is produced.

“Each unit of GAI holds about 30kg/ha of nitrogen and we know from previous experience that the crop needs 25-30kg/ha for every tonne of production,” adds Mr Leadbeater.

This is then added to details of the variety, previous cropping, the rotational position and the end market, to give the final plan.

“On this farm, we recommend that the total nitrogen requirement is split into four applications,” he explains. “The first goes on in early March, followed by further applications at GS30/31, GS32/33 and GS35/37.”

As the later applications are the most important, further tests at flag leaf are conducted, with the help of Agrii agronomist Steve Earl, so that any adjustments can be made according to plant nitrogen levels.

“Our early applications tend to be about 50kg/ha, while later ones reach 100kg/ha,” reports Mr Anthony.

Straight Nitram 34.5N and Double Top 26N 30SO are the main products used, he adds.

“The plan is to get the soil reserves and nitrogen applied – the soil nitrogen supply [SNS] value – as close as possible to the nitrogen harvested in the plant.”

To check this, Ross carries out N-balance testing just before harvest. “If the SNS value is 25kg/ha more than that in the crop, we know we’ve got it about right.”

Harvested grain is also tested, to check protein levels. “We keep a record of grain nitrogen levels, so that we can check those against our actions and have a basis for the next year. It’s an ongoing process.”

Yield mapping is used on the farm, but most fertiliser applications are flat-rated through a Kuhn Axis spreader.

“Balancing fertiliser applications, getting the timing right and knowing how much we are putting on is where the real precision lies for us,” ends Mr Anthony.