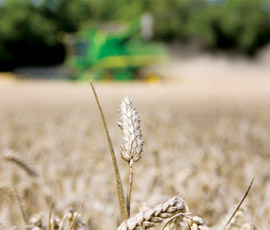 A Lincolnshire farmer may have broken the UK wheat yield record by 0.01t/ha, achieving a massive 14.31t/ha off 8.95ha of KWS Kielder.

“But we had a blockage in the drill and a couple of patches of blackgrass, so were never going to achieve that,” he said.

The current UK holder is David Hoyles, who set the record of 14.3t/ha with Invicta at Monmouth Farm, Long Sutton, back in 2011.

“It’s been very exciting – we had two independent referees who watched the combining and the weighbridge, so it could be an official Guinness Record,” he said.

The crop was sown on 15 September after oilseed rape, with a minimum till cultivation and Vaderstad system drill.

Mr Lamyman attributed much of his success to the use of Bionature’s Delta stabilised urea fertiliser; recommended by Farmacy agronomist Simon Shaw, as it had made the crops more resilient to adverse weather and soil conditions.

“We’re on grade two Wold land, so there’s no room for mistakes,” he said. “The Bionature products improve field evenness – the bad patches are doing much better than they used to as the plants are better rooted and can withstand more difficult conditions.”

Across the farm, the worst wheat Mr Lamyman had cut – drilled on 15 December – still yielded 11.2t/ha, and everything else had done over 12.35t/ha. “We grew Kielder, Cougar and Santiago, and have averaged about 13t/ha.”

“The Troy and Marathon rapeseed was the biggest disappointment, but we didn’t drill any headlands so it still managed 4.2t/ha, so we can’t complain too much.”

The record is pending approval by Guinness World Records, who will review the submitted evidence to determine whether a new world record has been officially achieved.