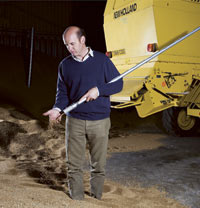 A Cambridgeshire farmer claims he has been banned for life from delivering wheat to a major miller after he challenged its grain analysis results.

Charles Leadbetter, who farms 450ha at Dunkirk Drove, Somersham, was blacklisted by Rank Hovis after confronting the company over the accuracy of its protein analysis.

Mr Leadbetter had 700t of Einstein wheat tested by grain merchant Gleadell Agriculture before deciding to deliver the crop to the Rank Hovis mill at Wellingborough, Northamptonshire.

Samples showed a protein content of 12.5%+ and a sale was agreed. Delivered late last month, the protein quality of the first few loads tallied with the merchant’s results when Rank Hovis conducted its own tests.

But after delivering the next load last Friday (2 October), Mr Leadbetter was told it had much lower than expected protein and he would therefore be receiving £15/t less than originally agreed – taking the value below the feed wheat price.

“I couldn’t believe what I was hearing,” Mr Leadbetter told Farmers Weekly.

“I asked the mill to resample the wheat and test it again. They refused, so I told my lorry driver to sit tight and not to move from the mill until they agreed.”

Eventually, Rank Hovis retested the wheat, accepted the delivery and dropped the £15/t penalty. But Mr Leadbetter claims he has now been “banned for life” from delivering wheat to any of the company’s UK mills.

Gleadell managing director David Sheppard said the final load of wheat on delivery had not conformed with the original sample results. “The retesting procedure was enacted and came out more in line with the farmer’s expectations.”

Rank Hovis mills about 1.4m tonnes of wheat a year – about 80% of it from UK growers. Gary Sharkey, head of wheat procurement, said the company was committed to British growers. But he refused to comment on the incident.

The HGCA said proper procedures should always be followed in any dispute between a farmer and grain buyer.

In the case of a dispute over grain analysis results, an independent re-test could always be requested, it added.