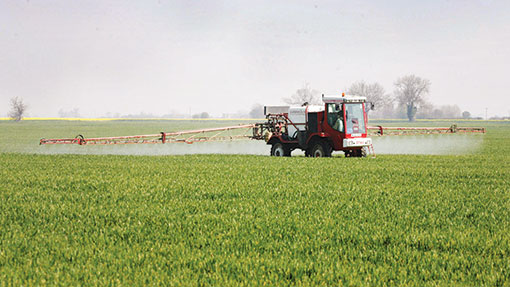 Both the T0 and T1 spray timings could be critical for success this year to tackle the early-season threat, with many reports of disease already being seen in crops.

The combination of above average winter temperatures, heavy rainfall and early-drilled wheat crops has created the right conditions for the rapid development of septoria, rusts and eyespot, while the chance to apply pre-T0 sprays has been limited, warn researchers and agronomists.

As a result, fungicide strategies at T0 and T1 will be more important – especially with the background of declining fungicide performance in curative situations, making it almost impossible to rectify things later on.

Jonathan Blake, senior research scientist with ADAS, points out that yellow and brown rust are always threats following a mild winter. “At this stage, some frosts would certainly help. We’re seeing the newer Warrior race of yellow rust in crops, which means some varieties are more susceptible to the disease than they were previously.”

But he adds that the appearance of yellow rust in the seedlings of resistant varieties shouldn’t cause concern. “Once the adult plant’s resistance kicks in, the disease will dry up and disappear.”

Otherwise, yellow rust control is all about spray timing, he advises. “Once it’s in the crop, it’s difficult to get out. Fortunately, we do have some very good fungicides to deal with it and the azoles, strobilurins and SDHIs are all effective.”

However, he believes brown rust could be the bigger threat in 2014, given varietal susceptibility and the mild season, along with fewer fungicide options. “Winter conditions are the critical risk factor and we have had above average temperatures so far. Much will depend on the next few months.”

There is a difference in triazole performance on brown rust, with epoxiconazole having an advantage, he says. “And we shouldn’t rely on the SDHIs too much,  as they haven’t been tested against this disease in the UK yet. In France, they haven’t risen to the challenge  as was hoped.”

For most situations, the use of a triazole plus chlorothalonil at T0 will cover the early-season threats and keep any disease in check, helping to guard against the effects of a delayed T1.

Jamie Mackay, an independent agronomist based in Essex, points out there’s always the option to add in a strobilurin at T0 if yellow rust becomes a major concern. “It’s out there and we’re aware of it. But there’s no need to panic.”

Where mildew needs attention, the addition of a morpholine at T0 is another option.

Looking slightly further ahead, bigger questions are being asked about the composition of the T1 spray. Including one of the new SDHIs at this timing is being suggested by some, who fear the difficulties of achieving curative control in a high pressure year.

Nick Myers of ProCam stresses that most spray programmes have had an SDHI at T1 for some time. “Boscalid (as in Tracker) has worked very well at T1, with its superior eyespot control, and will still be used widely. But growers are asking whether they should be using one of the newer ones at this timing, as well as at T2.”

He sees a place for Seguris at T1. “It’s excellent on rusts, gives very good protection against septoria and has good persistence. ”

Adding chlorothalonil to isopyrazam is possible, he adds, and will provide the anti-resistance protection needed to safeguard the newer chemistry.

ADAS has done 114 comparisons over three years with SDHIs at T1, reports Dr Blake. “Across all the years, the mean benefit of using an SDHI at this timing turned out to be 0.37t/ha and the average yield response was 1.68t/ha.”

The average cost of adding this chemistry at T1 is around £15/ha, or equivalent to 0.1t/ha, he calculates. “We haven’t expected a big response from the T1 spray in the past three years and responses to fungicides in general were lower last year. But there was still a benefit.”

His advice is to use an SDHI at T1 where the variety or site is likely to give a response of more than 1t/ha.

“You’re less likely to see a response in varieties with good resistance.”

ADAS trials showed both Seguris and Vertisan are effective SDHI choices at T1, he confirms. “We looked at Vertisan mixed with Prosaro and Treoris, which is a mix of Vertisan and chlorothalonil. Both did very well.”

But he recommends sticking with either boscalid or prothioconazole where eyespot is the target at T1.

Strutt and Parker agronomist Charles Ireland says he will probably – rather than possibly – be advising the use of a newer SDHI at T1 this year. His reasons are clear. “There are some really good wheat crops out there with lots of potential, but there’s also plenty of disease in them.”

That means on high-yielding sites it may be sensible to put one of the newer SDHIs on at T1 for the extra protection it will provide. “The main benefit of this chemistry is its protectant qualities. And we may well need those this year.”

Both brown and yellow rust are around, while septoria is lurking too, he reports. “The T0 spray will go on as planned, either Cherokee or a triazole/chlorothalonil mix. That should help to hold the situation until T1.”

His choice of SDHI at T1 will depend on the disease situation. “If crops are under pressure from septoria at that stage, it will be Adexar. It has the best eradicant activity for septoria.”

However, the longest protection comes from Seguris, he adds. “So where we need to guarantee protection, Seguris is the best option.”

However, replacing the traditional Tracker/Firefly/Proline choice with an SDHI does have a cost implication, increasing the total spend, cautions Mr Ireland. “It will add between £8-10/ha to the total cost.”

His big worry at this stage is brown rust. “About 70% of the varieties in the ground are susceptible and there’s plenty of disease inoculum following the mild winter.”