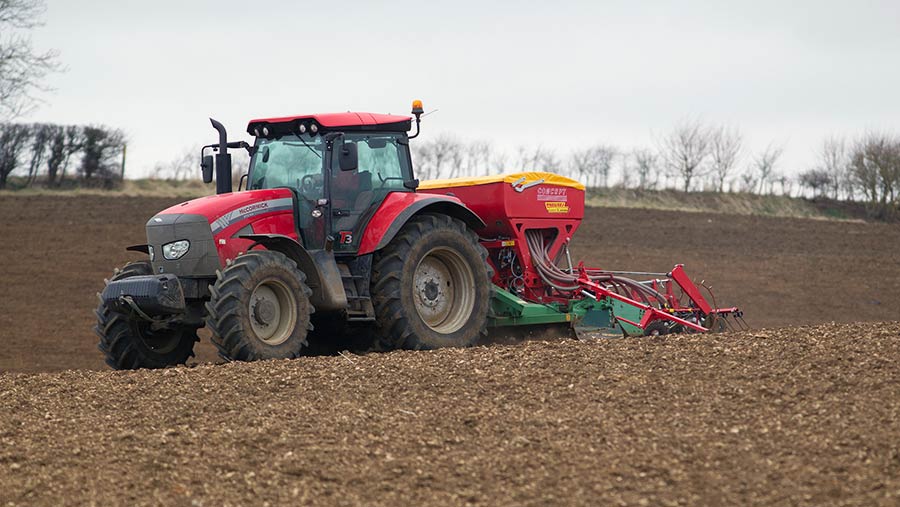 Getting spring wheat away to a flying start is a key part of hitting the biggest yields possible, something that is paying dividends for one Essex grower who is yielding more than 7.5t/ha.

With a much shorter growing window than winter wheat, establishment is a vital part of maximising the potential of the milling wheat variety Mulika, grown by Tom Sawdon who farms near Colchester.

The 810ha Peldon Hall Farm is based in one of the driest areas of the country, with annual rainfall averaging between 450-600mm, meaning good moisture retention is often uppermost in the mind of Mr Sawdon at establishment time.

Spring wheat was introduced three years ago alongside temporary grass leys when Mr Sawdon, who only grows Group 1 milling wheats, was forced to make changes in order to comply with the three-crop rule.

However, it’s far from a second-string crop on the farm’s heavy London clay, being described instead as an unexpected “pot of gold at the end of the rainbow”, after it slashed growing costs by £110-160/ha compared to winter wheat and yielded protein levels of between 14.5-17%.

The reduced costs have been predominantly caused by a reduced spend on chemistry, particularly fungicides, although a “pretty robust” T1 and T2 programme is still favoured to prevent diseases gaining a foothold.

Mr Sawdon offers the following advice for growers looking to try the crop for themselves this season.

1. Keep moisture in the seed-bed

Although moisture will be less of a problem for many growers outside of the extreme East of the country, retaining moisture by moving the surface as little as possible in the spring is the lowest risk establishment strategy, says Mr Sawdon.

As he puts spring wheat into his most weed-infested ground, he favours early autumn ploughing when there is enough moisture to get a good inversion to bury weed seed, followed by consolidation, and then leaving it until spring, apart from spraying off blackgrass flushes.

2. Be reactive and be patient

While a drilling date in the middle of March is optimum to give the crop as long as possible to build yield, growers shouldn’t be afraid to wait longer if conditions are cold or dry, with rainfall after drilling beneficial.

Getting the crop to grow away quickly will yield an early competitive advantage against blackgrass, and stronger plants will be in a better place to cope if conditions revert to colder weather later on.

Mr Sawdon opts for a competitive starting rate of 220kg/ha of spring wheat seed, but in areas where blackgrass infestation is at its worst, he has gone up to 240-260kg/ha in the previous seasons and would be prepared to go as high as 300kg/ha in the future.

Increasing how competitive crops are has been shown to improve blackgrass control by as much as 22-26% in trial work by the AHDB, and boosting seed rates is particularly important in wheat, as it is less competitive than other spring crops such as barley.

In addition to the routine N, P and K requirements, growers will see a strong return by applying sulphur annually where it’s deficient, says Mr Sawdon.

Sulphur deficiencies will lead to a decline in wheat yield and quality, and correct nutrition levels will also allow plants to use nitrogen more efficiently. Millers are particularly interested in good sulphur levels in wheat, as it is correlated with loaf volume.

Last year a total of 200kg/ha of liquid N was applied to spring wheat cropping at Peldon Hall, but Mr Sawdon opted to split it across four applications.

A little and often approach allows the plant to receive nutrition at times of high demand, with a small amount going on at pre-emergence, followed by two conventional splits for the bulk of the remainder, finishing up with a grain-filling ear spray.

6. Keep on top of growth regulation

While Mulika is well regarded for its yield potential, good protein scores and orange blossom midge resistance, Mr Sawdon acknowledges it does need heavy growth regulation, as it will grow tall if left unchecked.

He says May is a crucial month for applying the spray, and achieving a timely application will allow the crop to focus its resources on the grain rather than the straw.