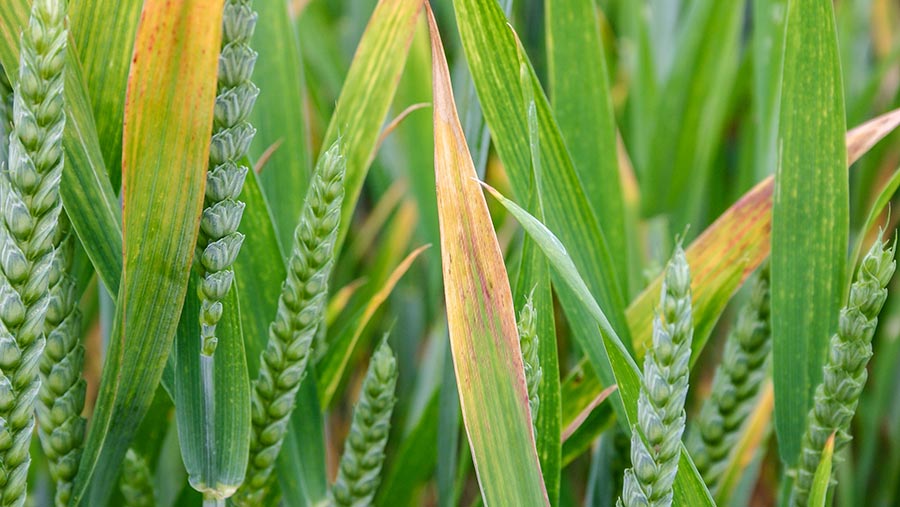 Winter cereal growers are being urged to focus on cultural controls – such as delayed drilling and good weed control – to ward off a major virus disease this season without a now-banned seed dressing.

The aphid-spread barley yellow dwarf virus (BYDV) can cause yield losses in wheat and barley of up to 60%, and growers this season will not be able to use neonicotinoid insecticide seed treatments.

Experts say the focus needs to be on drilling as late as possible to try to miss the main aphid migration and destroying the “green bridge” of volunteer cereals from the previous harvest, which can harbour aphids.

Without neonicotinoid dressings, such as Deter and Redigo Deter, the only chemical control is via pyrethroids, but some aphids are becoming resistant and these insecticide sprays only have a short period of activity.

Agronomist Todd Jex works across Dorset – which is considered a hotspot for the disease, as aphids survive well in the county’s mild climate – and says there will have to be a shift of emphasis in controlling BYDV. 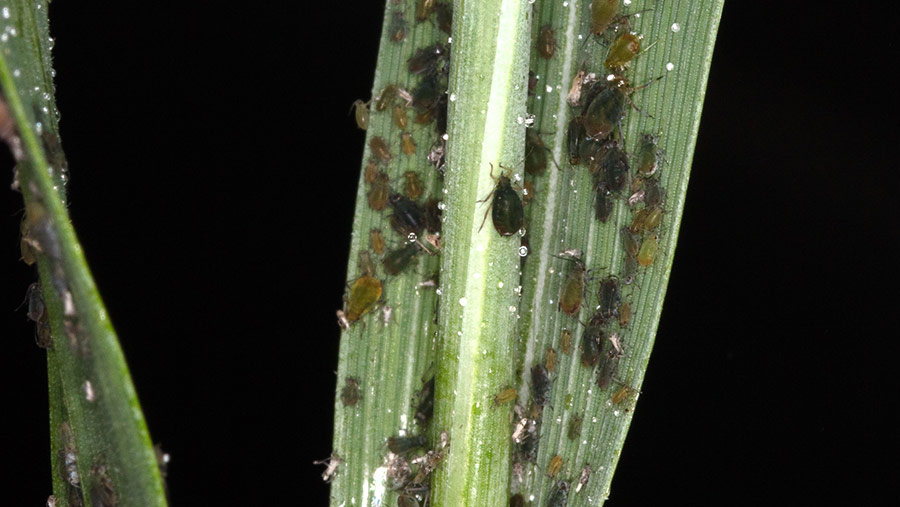 “There will have to be a massive focus on cultural controls to support post-emergence pyrethroid sprays and also on methods of encouraging aphid predators such as spiders and beetles,” says Mr Jex, who works for agronomy group Agrii.

Although there will be savings from not using Deter, estimated to cost about £28/ha, there will likely be more expenses this autumn from higher seed rates for the later drillings and more use of pyrethroids and the herbicide glyphosate.

Mr Jex advises the key methods of control this autumn are likely to be:

Holding back with the cereal drill as long as possible will be vital, especially in BYDV hotspots such as the south coast and into the south-west of England, due to their mild climates.

The old method of control when drilling in late September was often to use Deter to give six to eight weeks control and then top up with a pyrethroid spray later in November.

Since Deter is systemic, spreading out through the green leaves, it gave good medium-term control, whereas pyrethroids are largely contact-acting and rely on controlling aphids when they are present, although they do have some persistency on sprayed foliage.

With Deter banned, Mr Jex suggests delaying drilling until October. He says there is no yield penalty in Dorset from drilling up to the end of this month, with yields only dipping for November drillings.

He says BYDV can be severe in south Dorset due to its mild winters, plenty of hills for aphids to feed in the summer and also grassland for them to survive.

Seed rates may have to be edged up from 250-275 seeds/sq m for late September drilling to 300 seeds in mid-October and 350 seeds for sowing at the end of October, as drilling into colder soils will result in a lower establishment rate.

If drilling late, a phosphite or biostimulant seed dressing could be useful to encourage quick establishment in the colder soils of the late autumn.

However, creating well-established crops early is often counter-productive, as aphids are likely to be more attracted to healthier green plants in the autumn.

Killing off the green bridge of volunteer cereals is vital to deprive aphids of a habitat to survive – either by glyphosate spraying or stale seed-bed techniques, or a combination of both.

This may require an extra spray of glyphosate to kill off any surviving volunteer cereals to reduce aphid food sources.

Mr Jex says the focus will need to be on encouraging aphid predators and minimal-tillage or zero-tillage techniques are to be preferred to ploughing. Zero tillage will be even better than minimum tillage. Every effort should be made not to rely on pyrethroids, as they do not have a great safety profile for most of the beneficial predators.

Spraying off and then ploughing will be fine for controlling and burying aphids, but it will cause a major disturbance for predators, so ploughing should be avoided if possible. These aphid predators include rove, ground and soldier beetles, spiders, parasitic wasps, hover flies and ladybirds.

Two winter barley varieties – Amistar and Rafaela – have tolerance to BYDV and limited seed is available this autumn. A new wheat variety, Wolverine, is resistance to BYDV and some seed will be available in autumn 2020.

Growers should be looking to monitor aphids in the field, and the AHDB and many pesticide manufacturers and agronomy groups, including Agrii, have tools to advise on when to spray based on autumn temperatures.

Of the two aphid species that spread BYDV, grain aphids are showing resistance to pyrethroids, while bird cherry-oat aphids are still susceptible. So, with resistance present, sprays should be kept to a minimum if at all possible.

Mr Jex says application timing will be key when aphids are present, and suggests using 100 litres/ha with flat fan nozzles, 50cm from the crop and only on still days. Most, if not all, pyrethroids have a 5-6m arthropod buffer zone, so growers should be aware that aphids can walk out from grass strips on headlands into edges of the fields.

Planning for life without Deter

Dorset grower Jim Farquharson is planning to hold back the drill and put greater focus on stubble hygiene as he prepares for life without Deter this autumn on his farm in Tarrant Gunville, some five miles north-east of Blandford Forum, just over 10 miles from the south coast.

He is growing 70ha of winter wheat on light, chalky soils and has traditionally drilled in late September and relied on Deter seed dressing and one pyrethroid spray to keep BYDV at bay. 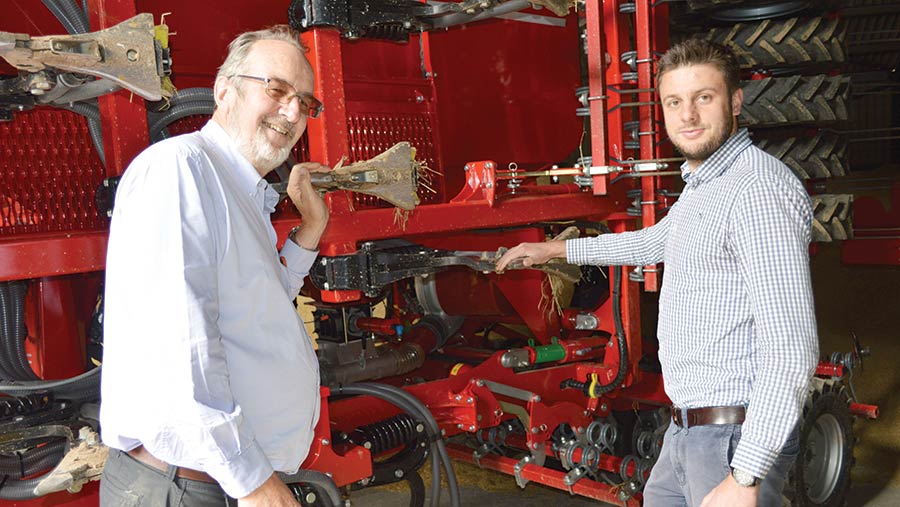 “Now we are going to have a much more integrated approach with BYDV, as, if we get it wrong, we cannot correct later, and the disease will stay with us for the rest of the season,” he says.

This year, he is aiming to drill wheat varieties Graham, Extase and Crusoe in the first two weeks of October with his newly purchased 6m Horsch Sprinter tined drill, and even his commercial crop of Bazooka feed winter barley is set to be drilled in October.

“We will try to drill later, as we have lost any early control, but I still like to see a reasonably good crop before the season shuts down in the winter,” Mr Farquharson says.

Wheat yields average 10-11t/ha at Eastbury Estate, with its 400ha of arable, and wheat yields nearly touch 14t/ha in good years. So he is keen not to reduce his yield potential by drilling too late. Wheat usually follows oilseed rape or spring beans.

Stale seed-bed
The focus will also be on destroying the green bridge by leaving stubbles to green up, then spraying them off with glyphosate. This will be followed by preparing a stale seed-bed with a disc-tine-roller cultivator and then spraying off any resultant green volunteers.

“We are likely to be using two glyphosate sprays, rather than one, as we did before,” he says.

Drilling rates are likely to rise to 300 seeds/sq m rather than 250-275 seeds used in late September. A pyrethroid spray might be applied about two weeks after drilling at the two-leaf stage, which is likely to be in late October.

Mr Farquharson is planning another pyrethroid spray in November, which means any saving on the Deter seed dressings will be offset by extra seed, and extra pyrethroid and glyphosate sprays.

But he remembers the disease hitting crops before the advent of Deter. “Then we would see the odd spots of BYDV in a field and they would get bigger and we would have large dead areas in the field,” he says.