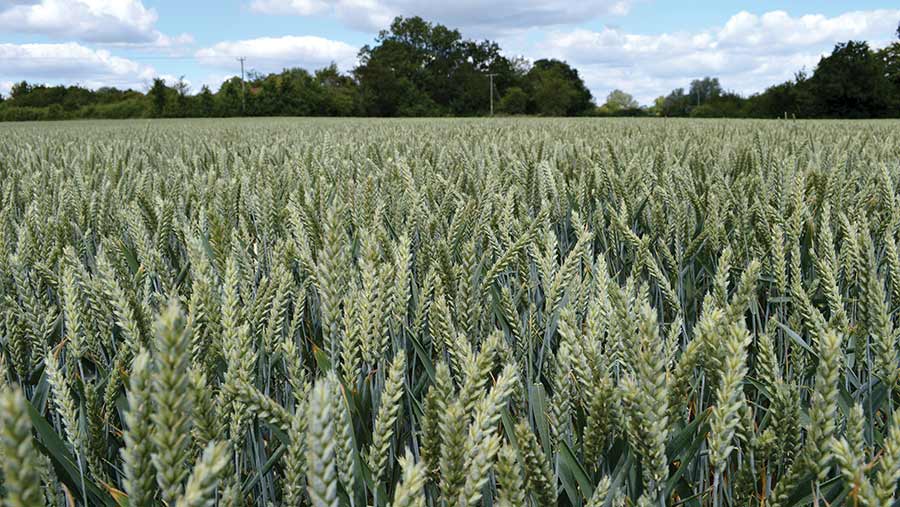 Berkshire wheat grower Nick Philp is growing the German top-quality milling wheat variety Nelson, as it gives him a good price premium over most other breadmakers at a lower fungicide cost.

It is Mr Philp’s third year of growing the elite or E-wheat for major flour miller Heygates at a £15/t premium over group 1 milling varieties. This year, he is growing 80ha and aims to produce 14% protein wheat on his Thames Valley farm.

“Nelson doesn’t present spectacular yields, but with a premium of £15/t over group one milling wheats, and a strong disease-resistance profile, the returns on the variety and the low input costs are the reason we are growing it for the third year now,” he says.

Mr Philp, who farms 1,200ha at Church Farm, Waltham St Lawrence, between Reading and Maidenhead, also grows Zyatt and Skyfall. In 2019, these two averaged 9.4t/ha in yield between them, and Nelson made 8.1t/ha.

“Our fungicide bill on Nelson is cut by 30%, and the premium and reduced growing costs more than make up for the lesser yield,” he says.

He adds that Nelson is a tall variety, with good standing ability, which helps stop grass weeds, and he will continue to grow it as long as there is a good demand.

George Mason, senior executive at  Heygates, says growing the variety helps replace imports of high-quality wheats from Germany, Canada and the US.

“The 2019 harvest was our third of commercially grown Nelson, over which time we have been impressed with its consistency in producing high-quality flour. The growers who planted it in year one continue to do so today, along with others who are acknowledging its advantages,” he says.

Lincolnshire-based Cope Seeds and Grain has been supplying German E-wheats to UK farmers for more than 10 years, and director Gemma Clarke believes that it’s going to be more difficult to import grain going forward.

“We are still unsure of future Brexit trading conditions, and predict that we need to be producing more at home to mitigate any possible tariffs imposed on importing goods after 31 December,” she says.