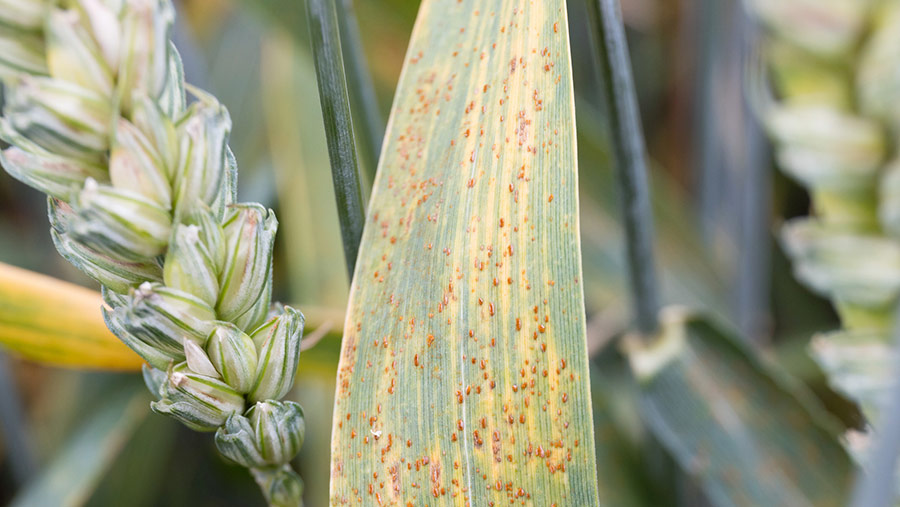 Winter wheat growers are being urged to look out for early attacks of brown rust, which can devastate yields and are encouraged by the current warm dry weather.

Brown rust hits wheat crops predominantly in the warmer south and south-east of England, often later in the spring than yellow rust which is now widespread down the eastern side of England.

Fungicide control is similar to yellow rust, and he suggests growers include a rust-active component to their T1 sprays, such as the azoles tebuconazole or epoxiconazole, or a strobilurin fungicide.

As well as Crusoe, varieties such as Zyatt and Firefly showed high levels of  brown rust, but he reiterated that all quality wheat varieties are at risk.

“Over the past 40 years, it has been shown that if you don’t do a good T0 and T1 then you will struggle with brown rust later in the season,” he tells Farmers Weekly.

Wheat varieties are assessed on a 1 to 9 scale for disease resistance in the AHDB Recommended List, where 1 is very susceptible and 9 shows good resistance. Brown rust Crusoe scores a lowly 3, Barrel a 5, and Zyatt and Firefly are both 6.